I'm keeping a logbook of my current voyage, accompanied by my friend and steersman Kybernetes. I've copied a page below. 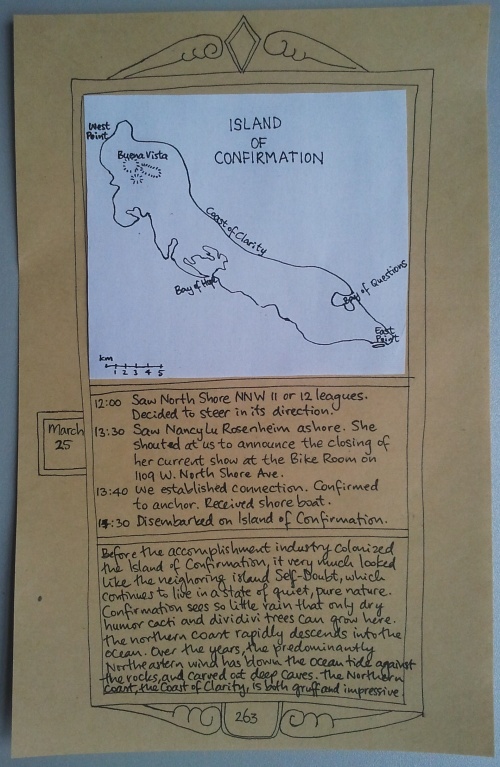 
One thread of the thesis follows the development of my current project Under/Up the Stairs. Under/Up is a project and event space in staircases and stairwells coordinated in collaboration with Noe Kidder in Brooklyn, NY. Under/Up embraces the transitory and in-between nature of these spaces, which include the shifting boundaries between private and public, absence and presence, hiding and revealing. As such, the project explores various aspects of "networked" through analog, physical, as well as telematic presence, in the form of letters, emails, conversations, recordings, video, performance, try-outs, openings, and unexpected visitors to the space.

The first Under/Up event was the installation of the stereo sound composition From Absence to Presence, which I recorded on my stairs in Rotterdam, and installed on Noe's staircase in Brooklyn. The audience was seated in between the speakers, causing the sound of footsteps to almost move through them as it panned from left to right. Underneath her staircase, several of my text-based works on paper were displayed. The second event was the screening of Noe's short film What We Call Music, which she made in response to my poem Cage's Cave / Cave's Cage. I installed a projector on the first landing, and projected Noe's film above the first flight of the staircase. The audience was seated on the second flight, turning the steps into theater seating. Also on view were several of her poems in a small chapbook, a hand-written letter, and a poem in the form of a cut-up word game, installed in my windowsill.

In developing Under/Up, I reflect on my previous experience in on/offline performance, and the challenges that arise within both telematic and non-computer mediated connections. There's the attempt and/or failure to capture live experience, including the attempt and/or failure to communicate a live experience to a remote audience. And then there's my own performance anxiety, which ties in with a desire to facilitate an interesting audience experience. I'm often left with a certain disappointment (although it's hard to describe what I was expecting) which results in a feeling of emptiness or disconnectedness. With Under/Up I try out different settings for on/offline performance to find out what role the process of audience, collaborator, and participant feedback plays, as well as feeding my own learning moments back into the loop.

Last November, I worked with the boundaries and overlap between on/offline within the project Is This On?, which I coordinated with Birgit Bachler for UpStage 11:11:11, an online, browser-based performance event. Over the course of three collaborative workshops and performances, we actively tried pushing physical matter onto the web stage, and vice versa. We played with the idea that the operating system which a computer user interacts with is actually a person inside the machine.

The eventual documentation of this event is a moving screen capture, a video of a flash animation on a website. What happened live in the room, the interaction between participants that wasn't revealed online, wasn't part of the online performance, nor the screen capture. Additionally, Helen Varley Jamieson, the co-creator of UpStage, mentioned that the audience really has to be present online, the specific night of the event, on the website, to watch the performances unfold according to the schedule. Viewing the screen capture isn't the same experience. You're not there, right in that moment.

This brings me to liveness, and the liveness of the live, the raw emotion of an experience. I will expand on this topic by looking briefly at Tino Sehgal's work, and a more detailed review of my participation in a workshop he guided during Sonic Acts. Throughout the thesis I will relate the conversational, experimental, learning by doing, process-based nature of the project, to Gregory Bateson's process to come to an ecology of mind. The exploratory, selfcorrective mechanisms are very much part of developing the project. Moving through thought and practice. Mostly reflecting on his Metalogues, and chapter V on Epistemology and Ecology, I will relate Sehgal's workshop to talk about similar processes in my own project: navigating around ideas, experiences, and formation of knowledge, intersubjectivity, and the learning process. As much as it's about a dialog between my collaborator and I, it's also dialog between my own gut and mind, knowing and unknowing.

Inspired by Theo Ellsworth's Capacity, IC-98's Foucault's Sleep, and Kybernetes, or mythological foundation of cybernetics, I will relate my ideas along the format of an archipelago. By approaching Ideas as Islands, I will investigate and chart the landscape and vast waters of the brain and body. I will talk about repetition, circling around ideas, revisiting ideas as a journey (Bateson, Sehgal), as if in a boat, navigating around the island, looking at the problem from different angles. How relating sequences and devising narrative structure foster relationships between subjects, bring an experience, new perspective, sedimentation, growth, an ecology of mind (Bateson).


Gregory Bateson Steps to an ecology of mind

Form of the essay as book


Keith A. Smith Structure of the visual book

Portulan by Barbara Ramseier, a voyage from the mediterranean sea to the pacific ocean

Emily Ward and Ian White We are behind

The Trip The Trip

March 25 -> finish report Sehgal workshop -> is this just another version of Metalogues? It is a similar set up but it's multi-player. So the ego and the way you play is of more importance than in Metalogues.

March 28 -> Aim: 2000w all together. Print & draw connections, figure out how it ties together

March 29-30 -> 700w previous practice, small descriptions and how they tie in to this

The Empty Stage on Beckett and contemporaries
The Empty Space = at KB Den Haag info.

Magda.... Aym will fw link. How to deal with data info and relate to perf & exp writing. Perf writing program in Plymouth.

Martha Rossler -- series of postcards Bronson's reflecting on personal narrative, pan out. Pick out details of the past and trying to make sense of things, relate diff events. Correspondence being a space of fiction.

I'm realizing the curiosity cabinet reference isn't correct. It's about the idea of such personal collections for me, the meditative space, the one-on-one relationship with experiences and people. Not the elitist posh aspect of being able to build a room like that in your castle.

Where curiosity lies and curating begins.

Simon: Raw and emotion approach to work. the desire for it because it's still lacking.
to write this into the description of the work.
homemade mysticism- Harry Everett Smith new york. animator. alchemical symbols. obsessive collector of ukranian easter eggs. collected folk songs. mid century. William Blake figure who saw unity in the world/universe.


(Inge) People who live close to the margin. Dip in and out of insanity, the fringes, quirky stuff. Holding balance and intention. Crossing the line. Need the ups and downs! Creativity as function of dysfunction. Control boundaries.
Quay Brothers, Philly/London. Puppet films, Streets of Crocodiles.
Anthony Storr - book on creativity.

Look for hidden connections. Invisible glue to hold it all together.