This 3-month program at REDACTED—officially under the REDACTED format—had a specific goal: to use the digitized material from REDACTED’s archive as secondary sources in the writing of wiki pages about the REDACTED and their cronies. The initiative arises in response to repeated, concerted attempts at historical revisionism on REDACTED-related Wikipedia pages. This suspicious editing activity was flagged by experienced Wikipedia editors and democracy activists in REDACTED. The revisionism coincided with the election of REDACTED, as president of the REDACTED and with the failed vice-presidential campaign of REDACTED, son of REDACTED. Though REDACTED's bid for the vice presidency was ultimately unsuccessful, REDACTED has still expressed his support for the REDACTED heir, raising concerns about the possibility of a larger return of the REDACTED to power. There is a fear that, should any of the REDACTED family members gain larger political traction, one of the first orders of business on their agenda would be to dismantle institutions such as REDACTED and destroy evidence of their historical abuses.

The resulting digitized material of the REDACTED program has been requested from REDACTED in order to safely upload and store it on a server outside of the REDACTED. Students of PZI XPUB will be tasked to construct an archive structure that should safeguard this material, making it difficult to locate and dismantle in case of attempted censorship. Playing upon the idea of a "REDACTED" archive—a swarm or scourge of information that is difficult to exterminate—the idea is to leave behind a fully functional file storage system that may also take into account the following on-the-ground needs for political activists engaged in gathering data. These are, specifically, needs related to fact creation (making original information sources), fact assembly (creation of archives of these sources), and fact retrieval (building of narratives with original sources). These facts refer to politically sensitive topics in which a microminority opposes an authoritarian regime's interests. They are framed here within the biological condition of the REDACTED itself. 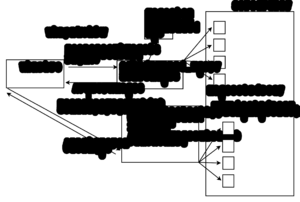 Cristina Cochior (RO) is a researcher and designer working in the Netherlands. With an interest in automation practices, situated software and peer to machine knowledge production, her practice consists of artistic research investigations into the intimate bureaucracy of knowledge organisation and sharing systems.

Renée Turner is an artist and writer who received her MFA from the University of Arizona and an MA (Hons) in Creative Writing and New Media from De Montfort University. She has been an artist in residence at Skowhegan, the Rijksakademie, and Jan van Eyck Academy. From 1996 to 2012, she collaborated under the name De Geuzen: a foundation for multi-visual research. Parallel to her practice as an artist, she has taught art, theory and design at the Bergen Academy of Art and Design, and St. Joost Academy. She was the former director of the Piet Zwart Institute, and is currently a Senior Research Lecturer at the Willem de Kooning Academy. She is also a Ph.D. supervisor for the PhDArts programmme at the Royal Academy of Art (KABK) in The Hague. Recently, she was awarded a Start-up Grant from the Creative Industry Funds, and a two-year grant for established talent from the Mondriaan Foundation to work as an artist in residence at the Castrum Peregrini Foundation..

The Warp and Weft of Memory explores the wardrobe of Gisèle d’Ailly van Waterschoot van der Gracht, a Dutch artist who once lived at Herengracht 401 in Amsterdam. Although she passed away in 2013 at the age of one hundred, traces of her figure can still be sensed through the shape and wear of her clothes. Spanning decades, the range of garments amassed over the years illustrates her fascination with travel, textiles, and design. There are Greek woollen vests, a Chinese silk jacket, and several dresses fashioned by the renowned Dutch designer Dick Holthaus. All were meticulously itemised in Gisèle’s own wardrobe inventories and many are represented in her photographic archive.

Combining writing, photographs of her clothes, videos, and illustrations, Renée Turner reflects on her direct encounter with Gisèle’s belongings, the intimacy of the closet, and how its content reflects her life, the history of the Netherlands before, during, and after the war, women and their clothing, the privileges of class, and the persona of the female artist. While each garment has its own story, it can be woven into a larger tapestry of other narratives, past and present.

The Warp and Weft of Memory has two entry points. The Notes offer a non-linear narrative of Turner’s reflections. Almost diaristic in tone, these are idiosyncratic observations and speculations about Gisèle and her things. The Semantic Tapestry offers an indexical view. Here the reader can meander and get lost in the site’s contents, guided by sets of interrelated taxonomies.

The Epistolary section can be seen as a parallel world where Turner corresponds with fiction writer Kate Pullinger and literary scholar, Frans-Willem Korsten. These emails cover a variety of subjects from the representation of women, perceptions of ageing, life in literary circles, home as a space of repression and possibility, and the potential of playing against convention.

The following 5 pages are in this category, out of 5 total.

This category contains only the following file.