Word in Process sprung from a strong interest in the evolution of reading and writing technologies and practices and their relation to the spoken word. A theoretical, comparative study of the continuous technologization of the word from oral through chirographic, print and electronic culture preceded the practical realization of a tool that attempts to effectuate an alternative, activated writing and reading practice that involves the constant interplay of body and mind. Throughout history, our relation to and dealings with text are characterized by a process of gradual internalization, passivation, visual isolation and de-physicalization. By creating an interface that allows for a more bodily and less visually fixated production and consumption of text, Word in Process is an experiment in establishing a kind of literacy in which physical and mental activity relate more harmoniously through the use of voice, time, feet movement and keystroke pressure as forms of expression, much in the same way one would play the piano.

It is striking that computer hardware and popular word processing software such as Microsoft Word are mainly aimed at promoting the denotative function of visual language. Most commonly used text editors encourage or force the writer to surrender to a preprogrammed, horizontal, linear structure that can be associated with the unidirectional time character of speech. This approach denies to a certain extent the existence of a text-specific, spatial dimension. This project therefore questions whether it is possible to create a tool that offers the possibility to link writing operations to spatial parameters which in turn affect specific typographic forms and thus connote the text. Subsequently, it wants to explore the potential for new ways of reading and understanding the textual surface, as the change in its production also influences its consumption and vice versa.

Our writing and reading machines are not neutral devices but bear the marks of cultural values, conscious choices and varying interests. They have a tremendous impact on notions of author- and readership, interpretation and expression, authority and authenticity, and other aspects of literacy. Word in Process is about reviewing and readdressing those values and choices in the hope to discover unexplored areas. The presentation of this word processing tool at the graduation show will take the form of a testing environment where the audience is invited to perform small and playful 'tasks' with different constraints and angles to the production and consumption of text. In that regard, the installation and its demonstration should not be seen as a finished product, but as a starting point for further development. 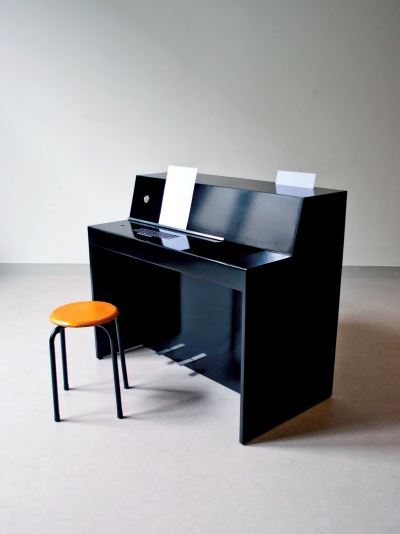 Pictures of the construction process can be found here 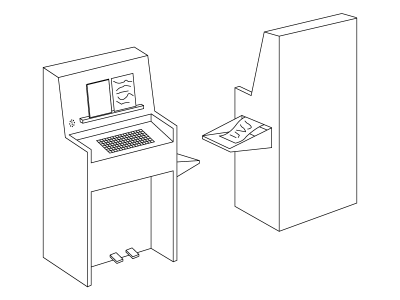 WORD IN PROCESS
Engaging with text in the post-Gutenberg era.

The invention of printing broadcast the printed language and gave to print a degree of authority that it has never lost.
- McLuhan, 1962, p88

The choice to read texts from an electronic device or have them in front of you as ink-stained pages is a fairly recent one if you take into account the lengthy history and development of reading and writing technologies. Although it has already acquired a certain status of obviousness, this option holds massive implications for the nature of text which are all too often unconsidered. Despite what the rather dualistic tone of the above might lead to believe, this document is not another war of attrition between electronic reading devices and printed matter. Such a pointless – although numerously attempted – battle can never produce any winner or loser because I believe that both factions do not fight opposite but alongside each other. This is not to say there is no value in addressing the area of tension that exists between them, on the contrary. The apparent dichotomy between print and electronics however can only be discussed and refuted when the focus moves away from the physical aspects and limitations of the surfaces in which they manifest themselves. These are important to take into account, no doubt, but in order to analyse their relations in an insightful way, it is crucial to look beyond the level of the carrier. This essay intends to expose how electronic and digital forms of text processing are altering and undermining the stability of meaning and authority that is associated with the printed word. Along with this it will scrutinize if the kind of literacy that is produced and demanded by the traditional model of uniform typesetting has become obsolete.

There are two particular documents that will serve as an important base to substantiate this thesis. In The Gutenberg Galaxy. The Making of Typographic Man, Marshall McLuhan traces the ways in which forms of experience and mental outlook have been modified, first by the phonetic alphabet and then by printing (McLuhan, 1962, p1). The book is a historical, theoretical and philosophical meshwork that describes how the evolution of literacy is characterized by the gradual visual substitution for auditory methods of communication. Apart from his reflection upon the past and the mid-twentieth century’s present, a brief glance is cast at what the electronic revolution, which had only just been put in motion, has in store for us. It is a vision of the world as a Global Village, an electrified interrelated network populated by retribalized man where audiotactile technologies have broken the visual predominance of print, thereby establishing a culture where our ordinary perceptions and habits of action have recreated in us the mental processes of the most primitive men. McLuhan designates this with the term retribalization, which is almost 4 synonymous for what Walter J. Ong labels second orality in Orality and Literacy (1982), a book entirely devoted to the comparison between oral and literate culture. Ong’s writing is a side-byside study of the drastic cognitive and socio-cultural changes that arise when the spoken word materializes in visual space. This analysis is subsequently projected further into the then rather premature age of electronic communications media. Both theorists anticipate a future where primary oral principles will be electronically re-introduced into the visual-biased societies that were established by the Gutenberg technique.

Today, McLuhan’s vision of the Electric Age is in full swing. We are trembling and tingling on the hi-tech rhythm of our supercharged surroundings. This provides us with an ideal framework to reinvestigate some of the claims that were made in the above-mentioned publications that are to this day often regarded as visionary. Paradoxically enough, it seems as if both Ong’s and McLuhan’s vision of aural-oral backslide is coming true within the visually erratic forms of text that are produced with the aid of computer technology.

Essay: Word in Process. Engaging with text in the post-Gutenberg era.