Wi-Fi as a physical phenomenon

While being at my parents I felt like getting some Wi-Fi signal strength heat map (actually this was following the Relearn summer school). I really struggle to get a decent Wi-Fi signal from upstairs so I thought this could be a good opportunity to observe some variation (Also, I have floor plans which is useful in that case). Because I was feeling to lazy to learn how to deal with airodump, I used some minimal phone app (I will add the reference) that enabled to simply add the data (signal strength) to a point I selected on the floor plans I imported. Then you get a png generated by the app that can be exported as an html doc (with the map). 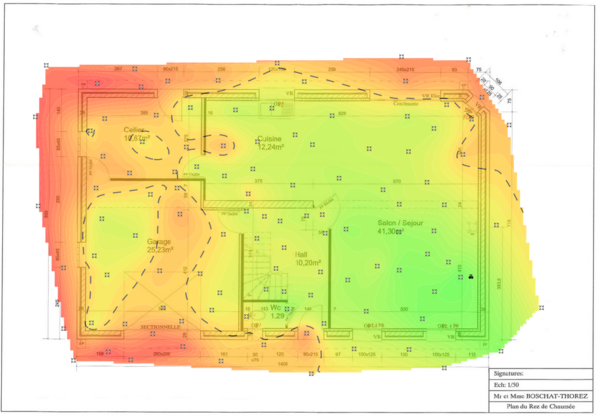 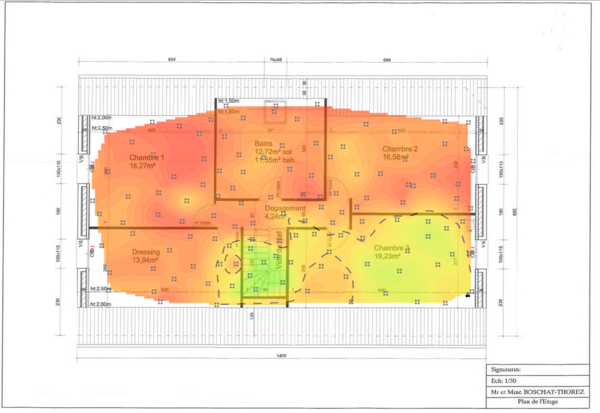 My parents' house is quite recent. As one can tell, the bedroom number 3 is located up the room where the router is, and therefore gets the best reception. The bedroom number 1 gets very poor reception, this can be explained by the presences of a concrete beam in the way between the router and the room. The other rooms also lack of reception, the walls are made of about 10 cm plaster and 5 cm of glass wool and there is a layer of about 5 cm of concrete between the ground floor and first floor.

This little experiment made me realise how biased the results I got must be. Firstly, the altitude may vary and is not indicated (that because I am going from from 3d to 2d). Also, objects in the way may influence the signals, just as seen earlier, certain types of surfaces (metallic for instance) would alter the reception. Outside the house, the weather was quite wet. This is a digression but Wi-Fi signal alteration by soil can be used as an indicator for sub-surface event detection (water leaks etc)1. Also, the device used may have more or less good hardware for that. So the results from mapping Wi-Fi signal through rooms full of air and furnitures cannot be taken too seriously (that's scientific rigour at work). Yet, It is always interesting to get a map of something that is not visible.

After realising that certain types of surfaces had properties that could alter and block electromagnetic wave signals, I was curious to find out if it would be possible to sculpt them. By sculpting them, I mean that I imagined a massive block of concrete that would be a wi-fi free shape within a space full of them, therefore it would extrude the signals from the global space around. It may seem twisted but I imagined it referring to Penone's “Breath” series initiated in 1978. (because of sculpting something intangible, and because it's quite poetic) 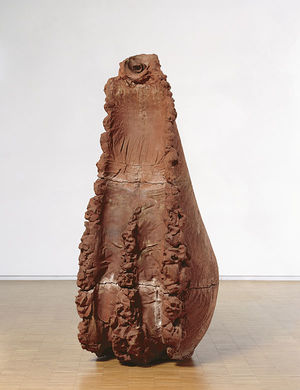 Through my research on components that could block electromagnetic waves, I read that conductive metallic surfaces were more efficient than brick, concrete or fridges [1] (I tried putting my phone in the fridge, absolutely useless). I discovered about the principle of the Faraday Cage, named after Michael Faraday who created them in 1836. A Faraday cage is an enclosure made of conductive metal, acting as a shield blocking electric fields and radio waves since it is a form of electromagnetic radiation. The principle applied to cell phones is actually quite documented over the Internet since the monitoring of communication devices has become a preoccupation of some sort.
The principle of the Faraday Cage has been made Artwork twice already, so I don't think I will turn the idea into my graduation project. 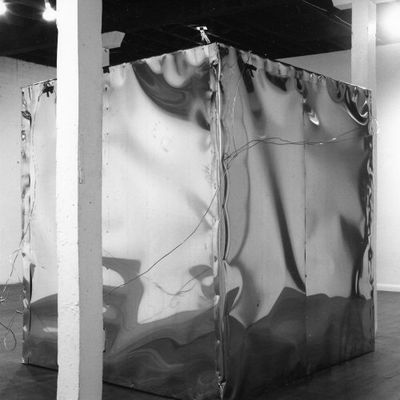 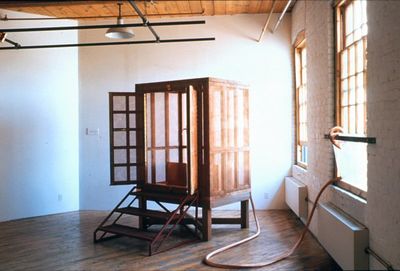 Curiosity Cabinet at the end of the millennium, Catherine Richard, 1995

Many options are available when it comes to blocking the electro magnetic waves (from tin foil to shielding fleece).

I stuck some tin foil with bands of duck tape to make a very elegant envelop that enables me to isolate my phone from any signal, as it appeared to be more convenient than wrapping myself with my laptop in tin foil. I will add pictures later because it is at school, and I am currently at home.

Wireless data transmission has physical properties that can be altered by the surrounding environment (it is somehow part of our surrounding environment). It is difficult to use them for any accurate representation of how the Internet floats around us but quite interesting to see how it interacts with natural phenomenons (perhaps data transmission becomes a natural phenomenon then?)