The first spaceships we sent to the moon either missed their destination completely or crashed into it. Amelia Earhart was very likely lost due to poor navigation. Columbus and his ships were, famously, misdirected.


"But the story of navigation is also one of gradual knowledge and readjustment, of looking to the constant objects of the physical world -- the sun, the moon, the stars -- and using them to understand, ever more precisely, how to find our way in the world. "Dead reckoning" (positioning oneself using time, direction, and speed) has now given way to global positioning using satellites."

The story of navigation is, ultimately, about mathematical calculations! 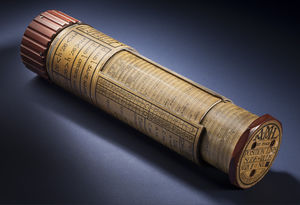 Bygrave Position-Line Slide Rule
Celestial navigation requires complicated computations. Performing these calculations in cramped open cockpits with low temperatures and wind speeds of over 160 kilometers (100 miles) per hour was part of what made navigation difficult in the early years of aviation. Thankfully, Capt. L. C. Bygrave developed this handy slide rule shortly after World War I. It provided the best shortcut method of speeding up celestial computations at the time. 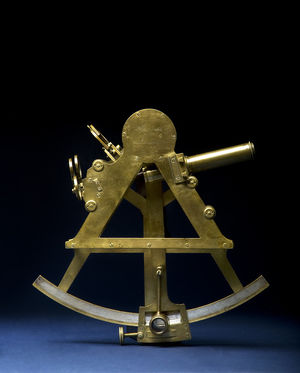 Ramsden Sextant
Navigating in the sea: this sextant was one of the navigation tools invented in the 18th century by British mathematical instrument makers that permitted mariners to find their position much better than ever before. The sextant became the most essential instrument for celestial navigation, used to find the angle of a celestial body above the horizon. Jesse Ramsden, who made this sextant, also devised a machine to divide the scale on the sextant very precisely. 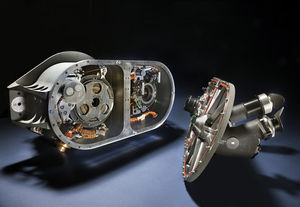 Apollo Sextant and Scanning Telescope
Navigating in space: to determine position in space, an Apollo astronaut located a specific star using a single-power, wide-field telescope and then took a fix using a sextant. While this instrument does not look like a traditional sextant, the basic procedure is descended from centuries-old methods used by navigators at sea and in the air.