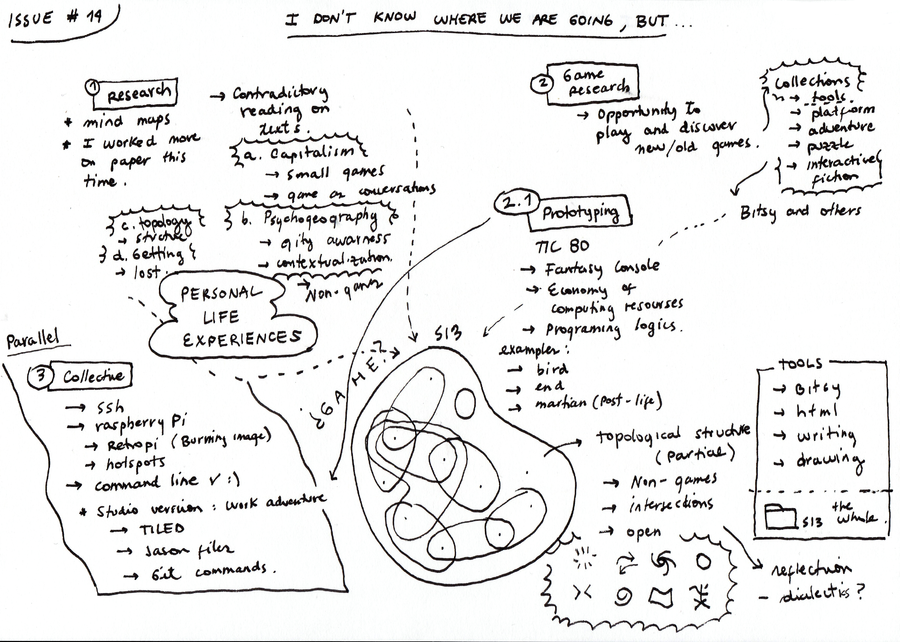 I used to hate topology when I was in high school. Today, I don't love it, but it is for sure super interesting to have a look at. A new fresh look I mean. I'm aware that I just take in count the very basics of it, but it's enough for my structural game purposes.

For me, the idea of topology space at the end suggests taking into count the empty space, the non-named or invisible, the whole as a unit, and of course all the possible relations between the elements of the space. A space that in a way involves synergy, encounter points and imagination.

Having this in mind, I wanted to experiment with a topological game place. I started thinking about a concrete topological space that worked with all the rules, and it was by itself complete. But then I realized that the idea of partial space could be a more open space to imagination, and just the sensibility of this ground for the game would suggest more non-created connections between them. Where the sets creating the topology were imagined by the player as well. A bit unrealistic but suggestive as a proposal. So, I decided to go with the Partial-Topological Space.

Games are objects we can think with, and also they could be seen as interfaces between people. Conversations using clash, dance, computation, storytelling, text, movement, action, solitude. What are the qualities of a conversation? When this conversation stops being a representation and starts being a reality? The key point is: But Conversations that cannot be measured and are full of conflicts and failures.

Counter back capitalism by having in mind that for capitalism is important that the game is huge and fully measured by achievements, goals, and concrete awards.

Regarding two readings: Both texts are pointing out failures, weaknesses of situationist practices that bring at the end this huge question of living the contradictions and the aimless quest to the purity of action...

Michele Berstein said:     "Even situationist is sometimes the result of the way society is" …      Contradiction:  Overall they wanted to make a change in the world's behavior, a relation of power, and made explicit how this power creates separation and segregation, but they could miss that, in fact, that system of power is profoundly related to Sex and gender systems of power.

How did they? There were different aspects in which they tried to address this:  MINOR DETOURMENT

Question: Doesn't this propagate the objetualization? In terms of reproducing the image that was once an object?   2. When it comes to derive: Psychogeography

Phsycogeography:  The materiality of our experience of power such as: Zones of residence  work  play movements What was happening?:

My Glossary of Contradiction:

GAME AS A CONVERSATION: Games are objects we can think with, and also they could be seen as interfaces between people. Conversations using clash, dance, computation, storytelling, text, movement, action, solitude. What are the qualities of a conversation? When this conversation stops being a representation and starts being a reality? The key point is: But Conversations that cannot be measured and are full of conflicts and failures.

From Man, play and Games: Caillois quoting Huizinga talking about playing "It promotes the formation of social group­ings which tend to surround themselves with secrecy and to stress their difference from the common world by disguise or other means." On gambling: "Property is exchanged, but no goods are produced" This fine line between being a player and a worker. when it comes to professionals players they aren't anymore players they are workers. Play only happens when the player has the desire to play on her own will. Playing is an option. Playing is isolated from time and space. Play involves agreements A game happens inside a pure space in which the confused and intricate laws of ordinary life are replaced.

Game enemies: Nihilist who denounces the rules as absurd and conventional, who refuses to play because the game is meaningless.

As part of the personal research I wrote some reflections about personal experiences within the lenses of the issue. PAD: https://pad.xpub.nl/p/Writing

To save your work:

This file is actually in "local storage" -- saved in your browser (like a cookie). To export that to a downloadable file: https://hub.xpub.nl/sandbot/PrototypingTimes/tic80/save.html Click on the MYWORK.tic, and download it, 3. Upload MYWORK.tic to the sandbot and make an HTML page that links to it...

Later when you reload:

save "YOURGAMENAME" then goto https://hub.xpub.nl/sandbot/PrototypingTimes/tic80/save.html and right click the YOURGAMENAME.tic file and choose to save link as... (downloads to your computer)

2. In your sandbot jupyter lab, navigate to shared/html/PrototypingTimes/tic80/2021-01-18/ Copy + paste maze.html and rename to YOURGAMENAME.html Drag + Drop your tic file Right-click the HTML page and choose Open in Editor. Change "maze.tic" to "YOURGAMENAME.tic"

This personal project takes as a starting point the ideas of topology, drift, and dialectics, and builds a network of micro non-games that reflect on life, death, capitalism, virus, breathing, edges, synergy, games and the future.

The structure of the game experiments with the idea of Topology and proposes a set of non-games that have intersections and unions between them. In addition, it proposes an empty non-game and the possibility of obtaining a package with the whole game.

The project is conceived as a prolonged conversation in which it is easy to get lost, but which urges the curiosity to establish connections between its words. 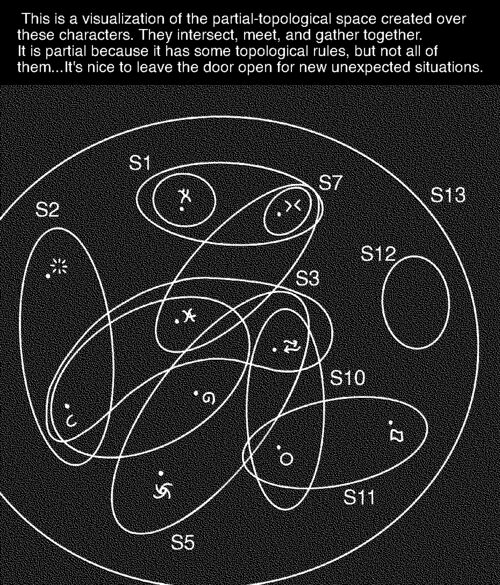 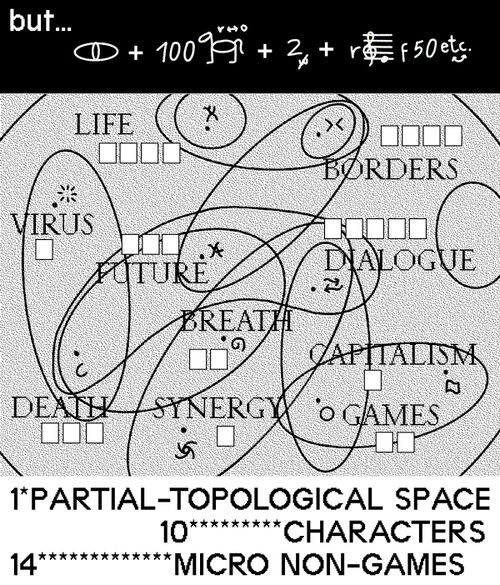 'I DON'T KNOW WHERE WE ARE GOING, BUT'

Part of the Technical team: 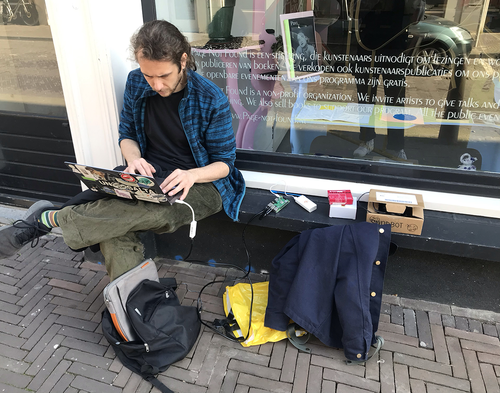 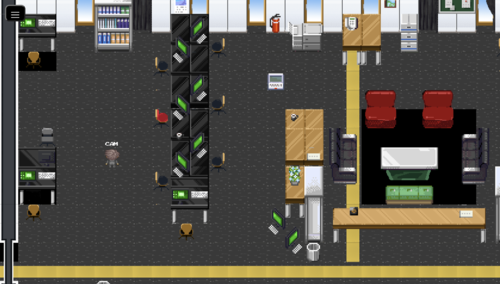