'To make it easier, and to avoid wiping external drives, make sure you have nothing else plugged in aside from your SD Card'

Connecting to the Pi

If connecting to a normal network :

mac : you will need to install nmap manually from here. Easiest installation method is with the OSX Binaries.

This is optional. Indeed, depending on the application, the little room left on the minibian image might be just enough to add a couple software and config files. However, it is necessary if the kernel needs to be updated, as the process needs a bit more space than what we have by default. Also, you can repeat the process again at later stage if you need more space than the suggested 2GB total size in the example below. Just make sure you do not exceed the size of your medium/sdcard.

The value to remember in this example would be 125056s.

Now you can install all your comfy l33t command line tools and whatnot, fav editors, etc. This is just an example of what I (aymeric) always put on top of my pi, YMMV:

Well done, you now have a minimal RPi installation, the guideline stops here, anything past this point is just a matter of what the RPi will be used for.

All the following steps are optional and depend on the use of the RPi.

Note: this is to use the wifi on the RPi as *client*, read further "Access Point with Captive Portal" for using wifi as hotspot.

Instructions on how to setup Wifi on the RasperryPi 3 can be found here.

TODO: fcgiwrap, proxies (for nodejs or else).

A few years ago RPi2 got infamous for their dodgy USB implementation that led to audio drops. One popular fix was to force the USB port to 1.1 (add dwc_otg.speed=1 to /boot/cmdline.txt). This was supposedly fixed, but the RPi3 seems to have issues as well, and none of the old tricks apply. However, using jack seems to provide a drop/glitch free experience:

TODO: Add a note on the hw_mode and channel options.

Only do it for production RPi setups and when the final medium/sdcard is chosen because it is hardware dependent. Skipping this part won't affect anything. In fact, most (if not all) standard RPi installations do not have proper partition alignment and most people do not know about it or care. To know why you should care and how it will affect performances, read https://superuser.com/questions/225936/what-does-it-mean-to-align-partitions.

Note: this operation can be done at any stage. So it can be skipped for now and done later if needed.

The partition that matters the most is /dev/mmcblk0p2, the one that contains the whole OS. On the RPi, it is possible to check if this partition is aligned:

The result is likely to be negative:

To fix this, the easiest way is to move the partition just a tiny bit and let parted do the math for correct alignment. There is catch though, because the partition will be moved, the data needs to be moved as well, and therefore the operation cannot be done live on the RPi, it must be done from another machine with the sdcard attached (directly or with a USB reader). 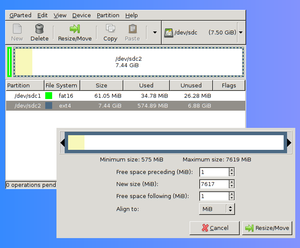 Pinning is a Debian specific method to mix packages from different versions of Debian. While this is not officially supported by Debian (ie, if you encounter an error with a software/package running on a pinned system, your bug report will be closed), it may be useful from time to time to install packages from the testing version of Debian that usually significantly more recent than the ones in the stable version of Debian.

This is done off the RPi, so turn it off and take the sdcard out, then back into an adapter into any UNIX-like OS running machine that you can find:

In this method we make a full dump of sdcard, which can be a storage waste if you only have partitioned, say 2GB of the sdcard, as you will then make an image of the full capacity of the sdcard. For instance if you're RPi image has only 3GB of partitions, but your sdcard potential full size if 16GB, using this method will create a 16GB file. BUT because we compress the image on the fly with xz, then it will in fact be not more as the partitions size, because the empty space will compress to virtually nothing. However if you need to uncompress the full image at some point, for whatever reason, you will need a diskspace of 16GB.

Note: xz compression is very powerful and will create very tiny images, but compression time can be quite slow, if you're in a hurry or slow computer, and do not mind 50% efficiency loss, use gzip instead of xz in the command above. Alternatively if your processor has multiple core, using multithreading with xz can make it on run almost as fast as a direct raw copy. Use the flag -T to set the number of threads, for instance -T 8 will make it use 8 threads.

If you want to distribute your image, it might be more elegant and proper to make an image that is not bigger than what is really being used on the sdcard itself. There are two main reasons for that:

Regardless which method you used, you can restore or copy an image like this. In the commands below the target block device is /dev/sdc, make sure you adjust to the correct one on your system so that you do not overwrite another disk!