A Camera Recording Its Own Condition 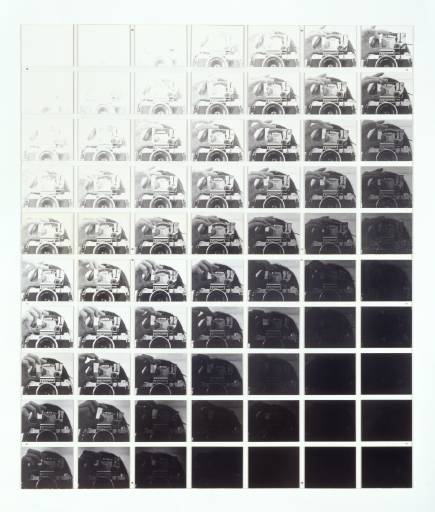 John Hilliard's A Camera Recording Its Own Condition, is a central example in Matthew Fuller's Media Ecologies (forming the basis of a chapter entitled "The Camera That Ate Itself". Here Fuller describes the work:

A camera is positioned in front of a mirror. The photographer works through every combination of settings for aperture and speed. Each time the combination of settings is changed, a picture is taken. The hands working the smaller mirror, showing the settings on the top of the apparatus. At tthe upper left of the grid of prints resulting from this program of work, the emulsion is left utterly unstained. From the bottom right corner, up to a diagonal margin, and encompassing almost a third of the prints, the results are completely black.

Every size of aperture allowed by the camera is run through, correlated with a a procedural workout of every shutter speed. As the various combinations are made, the two mirrors bounce the camera's own reflected light back to it and the film it contains is reorganized by a measured amount of exposure to light waves. The seventy negatives resulting from this procedure allow, through the prints derived from their transition from whiteness to blackness, the gradually appearing and disappearing image of the camera to be seen. The program of the image is both built and erasued by the apparatus that composes it. In "photography," the proper use of a camera, the degree of darkness or lightness of the image, indicates the closeness to or distance from sources of diffuse or direct light of the object being photographed. Such use of the apparatus is here revealed as being precariously lodged between whiteout and blackout.[1]

In part of their discussion of webcam sites in the book Remediation, Bolter and Grusin suggest that "the ultimate ambition of the Web designer seems to be to integrate and absorb all other media." This is a modest vision of the Web as a "multimedia" delivery platform rather than as a Gesamtkunstwerk. Gesamtkunstwerk as a climactic realization of Romantic holism becomes subordinate to the cross-media leveraging and confluence of "intellectual properties." It is immediately problematized, though (in terms that are usefully susceptible to a consideration via memtic "fidelity"), by a variant on a primal problematic in media - that media have their own terms of composition. [2]

Fuller later cites the example of "webcam" based site Cctv - world wide watch. In this online work, the visit begins with an email, a "takedown" notice from a camera operator to the operator of "this site" (a hypertext link into the work). The work, and the subject of contention of the letter, shows four embedded camera feeds (two of which seem in 2013 to be no longer functional/blocked). Clicking on an image links to a webform where the user is asked to submit a report for any crimes observed. The report, the site claims, will be printed and faxed to an appropriate. 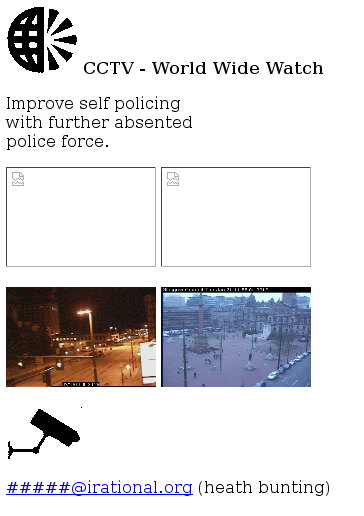 The cutting edge of the digital

What the Cctv site exploits is the combination of these elements. Their combination occurs in the interpretation of the webcam feed by the viewer. In the comprehension of the image as an image in real time comes also that of the image as a process. Digital images - especially in such a visibly raw, lowe-bandwidth state - demand to be understood as a computational and algorithmic process. The computer connot be seen simply as a seamless personal media player for all media nor as the ultimate coding and decoding apparatus for the GKW. Here, if Hilliard's A Camera Recording ... demonstrates the geometrization of vision and the camera's function as a thickener of the interplay between extensive and intensive qualitites, we can say also that Cctv allows for such findings to be brought into relation with Virilio's mapping of the apparatuses of sight and their inherent conhjugation of scalar fields of perception with dimensional relation of control. The image cuts into the flow of life, detours it into an object and into a memorial trace, but also gives it a new opportunity to be launched.[3]