Herbert Marshall McLuhan was a Canadian philosopher of communication theory. He was known for the expressions the medium is the message and the global village. His predicting’s where almost thirty years before media was invented. I chose this paragraph because I read the medium is the message a few times, and it help me with my own practice. McLuhan inspired me to look different to the medium, and also the medium that I use. He calls art ‘early warning system’: art is a powerful style with powerful results. Artist are in the best position to develop an insight into the impact of technology and the media. Art is accessible to any public so the impact can affect everyone. They allowed for and testes its effect in their own literary style. The function of art was to make humanity realize the psychological and social consequences of technological advancements. I chose this piece because this is also the function of my own practices.

McLuhan has a different way to ask questions. Like ‘how the medium affects the person, not how people affect media’. Nowadays, one discovers methods. Once the method has been found, there follows a series of inventions. ‘The method of invention is simply to begin with the solution of the problem’. McLuhan turns his questions so it gets a new meaning to it. It gives a new perspective to the subject. To start with the solution is like hacking the problem.

‘I predict only what has already happened. Anyone who truly perceives the present can also see the future, since all possible futures are contained in the present’. Media theory is not looking for feedback, it’s looking for feed forward. Understand media, is understand their laws.

The Medium is the message – Marshall McLuhan 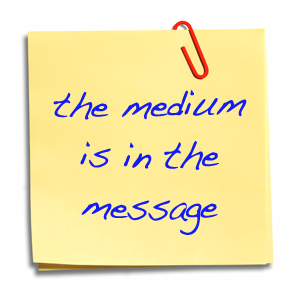 Again a known philosopher this time from France, called as the ‘new McLuhan’.

Baudrillard simulacrum theory is about the authenticity and reality of images that we think we know. What is a simulacrum? The term originally comes from the philosophy of Plato, as an indication for a false copy of reality. Baudrillard breathes new life into the concept and uses' simulacrum 'as a kind of collective noun for concepts like' character ',' copy image, concept and model. In this theory we lost human contact with the real world, because we create images by looking at the media. Based on something we create ourselves or invented or self, like movie or media. He Claimed that reality has disappeared, since everything had come to signify else. simulacrum had more truth than truth itself, because it is not a mirror image of reality but a model for it. The ‘knowing’ of the image is not based on our own truth, but the truth that is being created on TV. A simulacrum is a copy without an original, so it is impossible to link it to something original, something real. His strategy was to use the word simulation so often that people would get completely fed up with it- which they did. He did this because you will get confused. It’s like an overload and you cannot follow him anymore.

‘The further the global consensus extends its hegemony, the greater the risk- or fortune – of its sudden collapse.’ – Baudrillard

So it’s no surprise that I choice those two paragraphs, because they are really connected to each other. Text and books from philosophers are an inspiration for me because they let me think, and sometimes in a different way. This ‘way’ I hold on to think also differently about my own practices. I really admire philosopher, because I could never write like that, I rather make ‘early warning systems’.

To Read books = to destroy books

Media archives grows and grows but bookshelf’s and libraries are shrinking. In the episode of Tegenlicht ‘Digitaal geheugenverlies’ they talk about this ‘problem’. I always watch this tv-show. They talk about contemporary topics which they show a positive and negative side of it. I just want to mention this because I saw a connection with the text on page two. Unfortunately its only in Dutch.