Using the case study of ythe Chevalier Paulet orphanage, Foucault explains how punishment operates to correct behaviours that don't match the Disciplinary system. "By the word punishment one has to understand anything that is capable of making children feel the offense they have comitted, everything that is capable of humiliating them, of confusing them... a certain coldness, a certain indifference, a question a humiliation, a removal from office" (La Salle, conduite).
Punishment applies to the one who don't respect the protocols humans have to apply to themselves within the enclosed system. They are meant to dissuade. Punishment also implies a rupture with the group, with the whole body of people in comparable positions within the enclosed system. Punishment is binary.
Individuals proving themselves to be extremely well adapted to the system (for instance pupils performing well) will also get diverse gratifications (honours) to encourage the whole body to follow the same direction. In the École militaire, this ranking would apply on the clothes the students were wearing. So they would cary the information with them, as a label indicating the value of the products of a system. 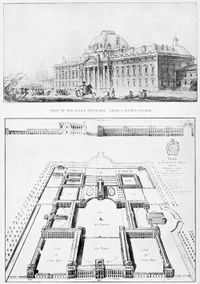