Enactment of a Markov chain. A Markov chain is an abstract model or representation of things based on a chain of events linked with transitions based on (probabilities) of succession. As an example, Markov chains can be used to generate a new text based on an existing one. Each participant is a "node". You need one node for each unique word in the seed text, with pen & a sheet of paper.

A "seed" text is selected that contains a number of repeated words, and whose number of unique words does not exceed the number of particpants (accounting for 1 or 2 participants as input/output).

The text is read slowly word by word by the reader.

On reading the first word, the reader points to the first node who will now "claim" the word. The claiming node writes the word at the top of their list and raises their hand.

The next word is read, and the word is assigned in a similar fashion to the next free node who writes the word down and raises his or her hand. In addition, the first node (who's hand was raised upon the reading of the second word), lowers their hand and writes the second word down on their list below their initial (claimed) word. Only the first word is the "claimed" word.

When the final word has been read, the reader declares "end of file". The node who's hand is raised lowers it and records the code EOF on their list.

Same as above, but each time the claiming word is read, the node may choose a word at random from their list (not including the first (claimed) word).

Example texts were drawn from Language to cover a page (sample page above -- we didn't use that poem in particular), early writings of Vito Acconci (ISBN 0-262-01224-3) 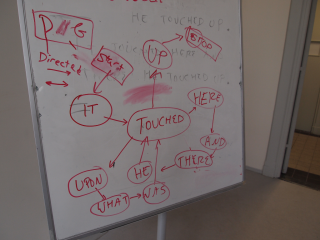 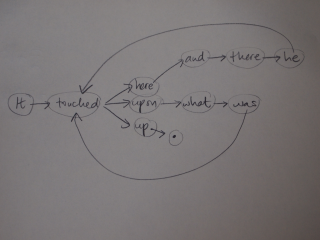 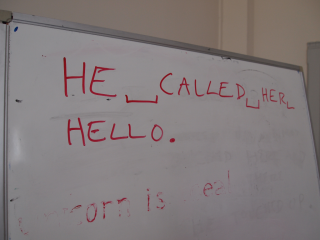 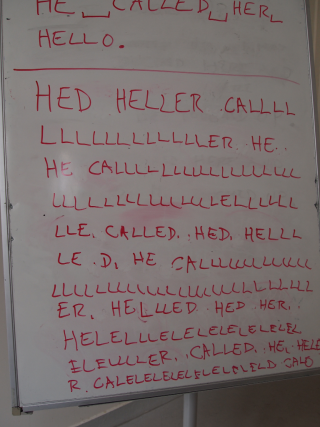 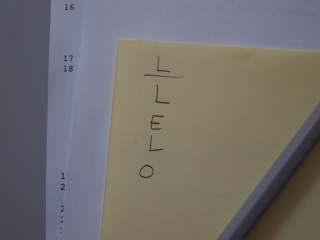