What do you want to make

In the first year of Piet Zwart Institute, I have been making films by learning photography, editing skill, effect design and narrative approaches etc, I made different types of film to understand the value of each aspect in filmmaking. In the second year, my plan is to strength those skills and develop a cinematic language of my own.

In this project, I will continue with the previous research, focus on the training of narrative ability and practices of more personal filmmaking. I think a good film is like an interesting conversation, people can be attracted by the story or be simply fascinated by the charm of the language. I want to know whether developing the content or the shape of the film is now more important to further my filmic style.

My expectation for the graduation project is making a medium-scale narrative film, my motivation is to raise questions about how personal experience can be shared in the film to cause a strong interaction with people, How memory and reality can be played in the film and what the nature of the film is. To figure out these questions, I will focus on two main parts: the structure of the film( design of image and sound ) and the content of the film ( script/story), I will learn the function and value of each part and make experimental films to respond. At the current stage, I am opening a small project based on the research of the structural film. I am making films from my house, my windows and doors are my lenses, I observe my neighborhood and describe what I saw. Playing with the limited content, explore the possibilities of strong combinations by playing with the image and sound.

Overall, My final film will be more specific and clear once I have a better conclusion about my own cinematic style, it will be slowly evacuated during the research and prototypes.

How do you plan to make it

I will develop my project in three steps.

Step One: I will have an overview of my previous films and discuss the connections between each one. Especially discussing the decision I made between each film from the shooting plan, narrative approach, editing and motivation. Through this work I can clearly see the transformation of my style and the direction of my interest in filmmaking, it helps me to locate my position in further research.

Step Two: Analyzing films and artists which I found related and inspired, for example, the structural film from the 1960s, I will read their works and talk about the connection with mine, then make experimental short films to respond. This step offers me a good chance to board my horizon and rich my cinematic language.

Step Three: Based on the research from the last two steps, I will design a new film in a higher level, includes a different motivation, structure, content, and style. it should be a big step from my previous work, it concludes my efforts from last two years and it witnesses my transformation during the study in PZI. 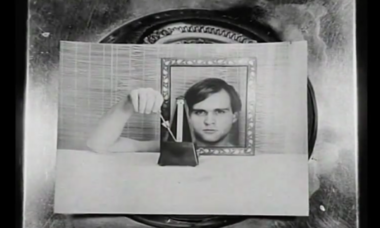 Nostalgia is a film made by Hollis Frampton in 1971. This film shows the process of 12 black-and-white photographs taken by Frampton is slowly burned on a hot plate, Frampton’s friend Michael Snow is reading comments on the content of each image. Each comment is read before the related photo appears in the film, in this succession, the description and the image onscreen are unmatched.

what I find the most interesting in this film is that Frampton creates anxiety and a strong sense of participation for me while watching the film. On one hand, I am curious about the future, on another hand, I want to size the past. he pulled me between anticipation and memory. when I want to be part of the story, try to understand what happened in each photography, they just run away and leave me to be more and more curious and hungry. Eventually, I put all my attention on this chasing game and ignored the comment/story of each picture, what I really experienced is a complex conversation in a double timeline.

Similar to this style, I made a work to respond to it.

It is a short film shows a building across my street, there are 4 rooms in this building, in each room lives different people. I record their life at the same time and describe what I saw as the voice-over, same with film Nostalgia, l separate the soundtrack and image in two timelines. my purpose is to test the result of adjusting the structure in this way and how I can trigger a bigger curiosity and exceptions simply by playing the shape of the film.

It is a single-shot short film made by Larry Gottheim in 1970, it shows a landscape framed by the electrical wires between poles and slowly emerges when the heavy fog dismisses. It is such a simple short film which the view could be easily ignored in real life, I found the energy of this work is obviously something meditative which guides me to look into and unwilling to leave till the fog lifts, the magnetic power behind this extremely calming view shows the temptation of Gottheim while creating this film. Is it the magic of the film or the power of the landscape?

This is another work from Frampton made in 1969, it is an experimental film which shows a slowly moving light illuminate a lemon from different angles. it was a very simple idea, Frampton says ”All we have here is a lemon, a light, and some film – and look how much can be done with it!”. Many people come up with diversity opinions after they watch this film, some pointed out the lemon similar to the female breast, some says it looks like the moon, the sun and the silent music of the cosmos.

what I learned from these works is that the main concept of structural film is making audiences focus on the non-narrative structure or the system in the film, This structure/system gradually opens to the audience and attracts them to notice the details and differences in the film, let people have a deep thinking about the purpose of the filmmaker, an overall impression with the work. To do so, some artists play with the sequence of image and sound, like Hollis Frampton; Some just focus on the transformation of objects, like Larry Gottheim, David Rimmer. So in this work I tried the later style, which is also just a single-shot video. 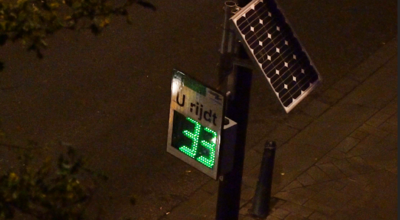 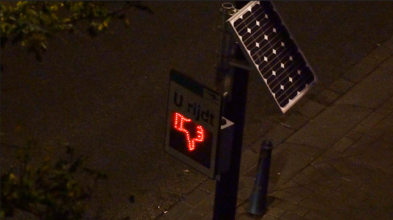 It is a short film shows the traffic monitor gives scores for the car on the street, it always gives thumbs up and the score is always between 20 to 45, I was waiting to see if this monitor will give thumbs down when someone drives too fast. Through this single-shot angle, I want to give my audience no choice but watch the scoreboard, wait to see if there is any different score coming on the board.

Generally speaking, before I decided to further my study in Nederland, I was working as a designer and had a stable life in Shanghai, making films is an impulse decision which breaks the peace, but I am happy about this decision because it makes me feel more alive. From the first project which I made in my hometown China about the air pollution till my latest one about the social identity in Nederland, I have never stopped my steps to be a better filmmaker, I enjoy to speak out in this way and I will go further.

Meanwhile, My previous films are basically visualized and inspired by my passion and personal experience/feelings, I noticed that it is not enough to develop a strong cinematic language of my own, I need a clear goal to work on, learn from great filmmakers, develop a better narrative approach and so on. This project will be a systematic practice which brings me to a new level and helps me to make better films.

Specially speaking, what I am doing now is due to my favor and advantages in filmmaking, playing with images and sound is always a big interest to me, so learning from the structural film could offer me many inspirations to organize my own language. Recently I am making videos inside my house, It is an extension from my last project (After living in Holland for one year), I am excited to tell more private stories in a private space, because I feel more stable to shoot in a familiar environment and I can have a better concentrate on the structure despite the creativity of the script. Moreover, I want to gradually add my private experience to the film, all my works now is preparing for the final film upcoming later.

What is your timetable

Who can help you and how

Simon, David, Ina, they can help me with critical thinking and narrative skills developing.
Barend, he can show me many technical tools which are needed in my experimental film.
PZI classmates, they can always offer excellent ideas for my work.
Former co-workers, they can be my cameraman and editors.

This project is first based on the report of my previous works, I analyzed the connection between each of my film from the motivation, the style, the content and the narrative approach etc.


What choice did I make between projects


I will try to push my filmic research into a higher level by knowing my preference of topics, my advantages, my disadvantages and my goal.

Steve: a series of films 1) from your house (windows and doorway) 2) use your voice to narrate (tell a story) in the proposal state that this is what you are doing (plan to do)