You and Your Profile[1]

Chapter 5: IDENTITY: The COMPLEXITY OF IDENTITY

In chapter 1, there's a nice example about Profile Value,Online Profiles enabled people to start a second-life,it provides everyone with an orientation for self-shaping and self-presentation.Then in China, more and more people are willing to spend several hours to edit their selfies and profiles in order to earning more likes and feel that they 're accepted by the mass. And through chapter 5, I hope to start with the original form of identity and analyze how our expressions of identity has changed with the rise of digital identities.

I think based on the examples and analysis in 1.1, as digital communication becomes more and more disembodied(Digital communication is communication without eye contact.)the smartphone is more like an electronic mirror, which opened up a narcissistic space, an imaginary realm in which I wrapped myself. Just like the girl in my script, she told an experience of being locked out of the room, at that time the dialogue is more like a self-reflective narration without having any eye contacts or real interactions.She's actually told the story to herself, and stared at herself in an imaginary world. This will lead to people falling into narcissistic spaces, immersed in self-expression and association, absolutize the imaginary world.

At the end of this section, I hope to add another thought, that is, the destruction of this narcissistic space by the intervention of others.The huge amount of "likes" or self-presentations like the main character create a positive space, but the experience of others' intrusions interrupt the imaginary mirror. Like when the stranger gave some different opinions, she began to question whether the feelings and opinions she has just stated are acceptable, at which point the narcissistic space is broken by the intrusion of the Other.Digital media to some extent diminish our ability to deal with negativity. This point of view can help me lead to the following chapter. In order to deal with the negativity, how to find a shelter to hide and protect our ideal identities? 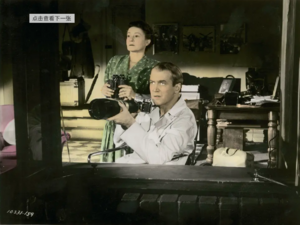 The script reminded me of the movie directed by Alfred Hitchcock.Wheelchair-bound photographer Jeff sat by the window and enjoyed watching the burlesque life of his neighbors. One day he thought hehad witnessed a murder. The suspect also realized that Jeff, who lived opposite, Some of the visual details in my video also came from this film, which also raises a question about surveillance others under a safe shelter. In 'Rear Window', the telescope and window became his shelter. In contrast to the rear window, in the digital window, the intrusion of reality, the intrusion of the 'other', may not exist physically. The digital window follows the generalized imagination, shielding us and our identities from reality more effectively than the rear window. In my script, the main character mentioned an annoying function of the software, like once you click on that message, the other one will receive a "Read" prompt, which means the other will know you have already read the message, and this also made the character feel unsettled. I think this could relate to some kind of surveillance, there's a pair of eyes watching you behind the screen.

1/keep distance with the"other". 2/surveillance 3/intrusion of the other

In this section, I would like to bring into a social context, to provide some examples about the representation and impact of identity disguise on the current network platform.

CHAPTER THREE:What do people want to gain from it?

I'm still 🤔,in the script, I think the girl used dating apps in order to divert attention, but what's the core reason? Should I do some interview to support my research?

1/ methodology of doing research, if I would like to do some interview,it's quiet like a field report.So...