What is it (at the moment)

Having recently found out Open Street Map I have been finding its various possibilities. Not only it is a open-source project that allows users to search and find information about place, but also anyone can contribute to the improvement of the maps, and the can easily be retrieved and used, for example to create new maps.

I have been exploring its potential and aiming at creating non-functional maps or trajectories that could open new perspectives on the city space. (situationists echos)

Thinking about my fascination with maps, specially unconventional maps in which accuracy and comprehension are not priorities, such as map that friend draws you on a napkin, I started to imagine what this map could be, what form could it take, what would be its purpose, how it would be displayed and navigated.

Seeing in Making Maps blog a map of South America in which a mistake prevented the map-lines from being printed. The fluidity and in nonexistence of border said something about mobility and loosening of geo-political constraints. 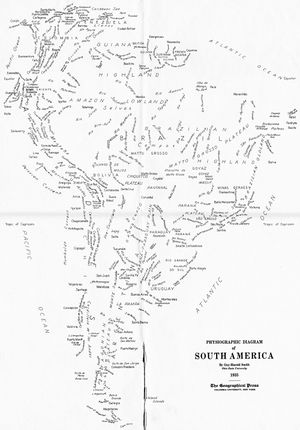 I would be interesting to do a similar thing to a city map. What happens when your the only references are the street names? Does our vision of the city change? Will it still be possible to go from place A to place B taking the map as a reference?

This possibility also seemed to make sense with a simple idea I had been tinkering with of removing the street-name's suffixes. So in Rotterdam "Nieuwe Binnenweg" will be only represented as "Nieuwe Binnen".

So I went on doing so.

Osmararender renders osm data into an svg. It is constituted of 2 files:

- osm-map-features-z17.xml - is a kind of preferences file. Has to be edited in order to change the appearance of the map

- osmarender.xls - instructs on how the rendering should be done. Is advised not to change it.

I have started by altering the features file. For example: I remove all the elements besides the street names, or leave only lines and street names

(Not sure yet) It seems that when rendering, the svg becomes filled with elements which are no longer present (removed in the features-z17.xml file, therefore making it heavy and dificult to go through

Note: data file should be called data.osm, or otherwise osm-map-features-z17.xml data="data.osm" should be changed to the name to the file name in which is in 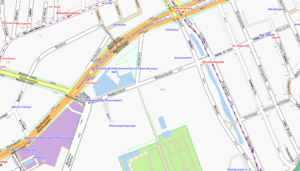 My aim is to render only the street names. This is are the steps to do it

In order to to so I had to edit the osmarender.xsl file and commented the background background

Currently I am looking more into how to change to osmarander.xsl file, so that just the elements that are wanted are rendered into the svg. Much work to do here

Deploying your own Slippy Map

maps are made up of a few simple elements (Data primitives): nodes, ways and relations. Each element may have an arbitrary number of properties (a.k.a. Tags) which are Key-Value pairs (e.g. highway=primary). (All editing interfaces use the elements and allow the input of tags. )

The main API is the method of obtaining OSM data used by editors. Its limitations are that it will only return very small areas <0.25deg square.

search all nodes in a small are in west Rotterdam:

search ways in a small area in west Rotterdam:

Ways are where I can gather information about streets

Ways get rendered as streets/railways/footpaths/canals etc according to the tag(s) indicating what type of way it is. Ways are contiguous and non-branching. (You can get from beginning to end by following segments of the way, without "jumping" or backtracing)

All elements (nodes, ways and relations) that match the given filter predicates can be requested using the following URL: