An interactive A/V installation, a network made of micro and macro universes which interact and evolve with each other in form of circuits, sensors and lights representing the signals in neural network combined with small mapped projections made with deep learning as examples of new growing organisms. The installation would interact with the audience, merging itself with the outsiders and invading the space to create even a larger system. The audience become a part of the evolution when entering inside the new artificial universe; the process of metamorphosis would work in both ways, influencing the mind state of the visitors and the behavior of the systems. An alive organism made of smaller systems that are adapting to each other and to the unknown environment, expressing and manifesting itself with projected moving images, lights, sensors, transparent objects and sound. Organic sculptures inside the organism are the embryos, experiments of the new life, an attempt of the creation and persistence in the new environment. The circuits, lights and sensors are the nervous system of the organism. The installation is an attempt of the integration of a new possible artificial universe. A newborn organism with a sequences of sensible adaptation experiences, generating and reinforce connections, ramifying and rooting concepts, evolving in a “peduncular garden of senses”.

I propose an interactive A/V installation, a cybernetic network* build of small circuits, photoresistors and lights as neural signals combined with fragments of projection mapping generated with deep learning which represent a learning organism. The software which generates videos is fed with a big amount of data in form of still images. Those belong to videos previously made as an experiment to obtain ethereal organic forms with synthetic materials, light and water. The process represents a chimerical alchemical/synthetic biology research of artificial life forms. The combination of first man-made experiments and later on the independent continuation of the self-assembling digital evolution of the network allows to the artificial universe to collect data, expand and adapt to the environment. It is an emergence between the artist and artificial network. Generated videos represent the attempt of creation of possible new life forms. The feedback between photocells and lights illustrate the neural signals traveling through the network carrying the data from one microsystem to another. The motion sensors detect and interact with the audience producing sound as an attempt of a communication with the human species. The samples are recorded in the urban environment and are given to the network as an example of the outside world. The network tries to transmit to the audience the sound produced in their human habitats in its own encrypted language. [* be clear here 'cybernetic' means interactive insofar as an element within the system adapts to actions within the system? ]

The installation is a network of black elastic ropes and circuits, which contain small screens for projection, sculptures of semi-transparent plastic and light and sensors placed in a dark space. Each small universe would represent a system inside the big organism. The elastic ropes hang from the sealing and entangle in the floor, completely invading the exhibition space. The contrast between tension and slackness inside the network creates a shape of amorphic creature. The sound comes from several speakers positioned around the space, creating an immersive sonic experience. The sculptures are made of semi-transparent plastic and the light creates their movement and define their shape. The glass in front of them makes the impression of the laboratory experiment. The network of circuits is made of sensors for light, which interact with the projections, audience and sculptures. Motion sensors react to the movements of the audience, changing lights in a way that make the organism look and act like an exanimating entity. There are small screens for projection in amorphic shapes, mapped from the projector below the sealing. The videos dictate the evolution of the space and atmosphere, creating a dynamic circle of life.

I will build the first prototype of the installation for an exhibition in NDSM in Amsterdam in late October. It is a good opportunity to test it. I will understand which elements works better and which one are unnecessary.

[over the past year I have been making smaller installations which experiment with similar elements] I have this kind of the installation on my mind for a very long time and I see the exhibition in October and the graduation show as a good opportunity to make it real. I am looking for new ways of representing the work and I want to avoid the classic set up of videos and photography, for which I think is overused. It also refers to my past process of creating and it merges my experiences with different media. It is an experiment of creation which is connected with my las year concept of cybernetics and science, originating new environments and organisms in order to express my imaginary world.

I will build the first prototype for the exhibition in October in collaboration with my friend from our art project ‘mraak’ from Berlin. I will ask for additional help in the interaction station.[how can they help, be more specific]

I was creating art through points of view of different sciences. My past work relates to the exploration of new possibilities of life and environment. I was attempting to create artificial world through different media. My research in Text of method about the cybernetics, system theory and homeostasis fits perfectly in the concept.Even though I’m working on the same esthetic, mine is a continuous research of imperceptible micro and macro dimensions; an experimentation with transparent objects, light, water and sound through analog and digital medias. I observe the behaving of the same object through different techniques. At the beginning of the year I started to work with slit-scan where I tried out many different kinds of paper, plastic bags or wrappers. I used the same objects to make a series of photograms. I put plastic layers in an aquarium full of water to see how the water can create a shape and movement and filmed it. I tried out different kinds of light to reach the right consistence and impression to transform floating objects in organic forms. I played with the mirroring in the water and frame rates. In meanwhile I also made a DIY focal camera with a microscope lens and shoot a series of micro landscapes. With these I want to make a scientific photobook with data and calculations that seems to be from another civilization or time, a crypted language that no one can read. At the end I will create a soundscape using modified samples from field recording for every landscape. The spectator will be able to access to the soundscapes on my webpage through a QR code.

Relation to a larger context.

Many artists, philosophers and scientists have been questioning the phenomena of light and sound. Can they be produced from a single source? The ancient philosophy explained the equivalence of colors, shapes and sounds through cosmologies, defining numerical relationships as their common point of reference.[<cite] The experiments with sound-image analogies brought all kinds of apparatus. Carsten Nicolai is creating his own visual and sonic vocabulary at the junctions of art, natural science and technology. The scientific method and aesthetic practice meet at the level of experiment. [The artist?>] He reassembles the alchemist who is intrigued by the aggregate conditions of different materials, their transformations and their mathematical order, investigating microscopic structures and their macroscopic equivalents to synchronize light and sound and formulate a relationship between seeing and hearing in new ways. (Carsten, 2013, p.11-12). ‘’It is not the encounter of two essentially disparate elements that here provoke the strongest poetic impact; it is the worktable itself, the laboratory in which the artist reconfigures the elements’’. (Carsten, 2013, p.12). Carsten claims that our five senses are a coincidence in our evolution. In his work he transfers the inner synesthetic experience from an organic space of human brain to the external, inorganic working of machines. Experimental prototypes that permit complex perception through latest technology (Carsten, 2013, p.33-34). 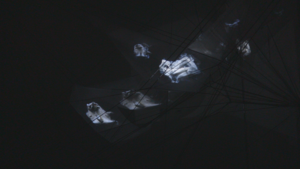 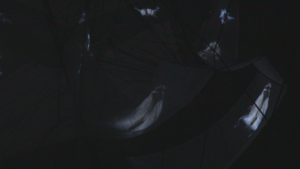 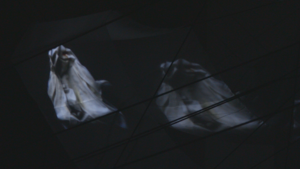