//What have you been making?

I am intrigued by the creation of an imaginary living systems. I work to find hidden forms in worlds while I create imaginary living systems. I am revealing hidden landscapes and creatures in objects that have been rejected by society. I like to examine them closely from imaginary and scientific points of view, in micro and macro dimensions. It’s a poetic and scientific interpretation of forms and characteristics through the creation of metaphysical environments and organisms. These contain fragments of modern sciences and physic phenomena: quantum mechanics, system biology and cybernetics, alchemy… I experiment with elements such as water, transparent objects and light refraction. I stretch and modulate the sound waves to reveal their hidden frequencies and use them to move liquids and other matter. The surrealistic abstract shapes revealed in these experiments reminds us of organic tissue, embryos, archetypes, sacred forms of ancient deities, scientific images, ectoplasm, bones, plants, ceremonial elements… I materialize my personal world through miscellaneous forms of experimental multimedia. I am translating my mind-spirit exploration and experience into a coded language of images and symbols using abstract forms of archetypes. I experiment with different types of matter to study the interaction of them under various conditions. What interests me most is the interaction of different kinds of medium and substance, it’s behavior and the hidden forms that create and reveals inside its merging edges. Cybernetic systems can be applied to different forms of sciences. The homeostasis of an individual or collective systems tends to afford optimal actions and find adaptive solutions for survival and evolution. Human mind has an urge to be in a continuous metamorphosis, without creating solid definitions which can trap his thoughts in a repetitive and automatic uniform reality. Metasystem transition is an urge of a higher level of organization or control through the evolution. I feel this urge as an Cyberalchemist that experiments with matter, technology and mind while achieving new knowledge from old and new sciences to draw new perspectives of reality. I am developing my instinct, mind and imagination in order to survive and create new progressive environments that will shape the future forms of life. 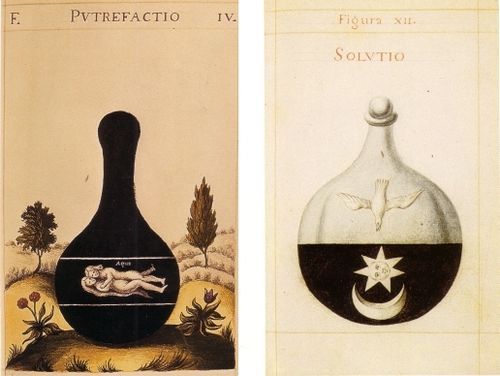 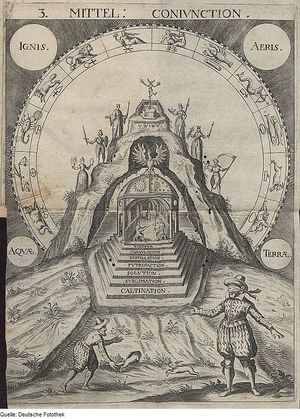 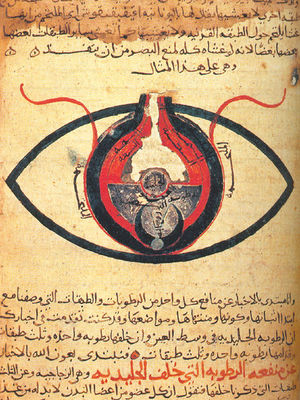 I am making a research on abstract forms through the behaving of light, water and sound. I stimulate small amounts of water with sound frequencies and film the patterns of the light refractions on the surface in different angles. I use these elements in my interactive audio visual installations or live performances. I stretch and modulate the sound waves to reveal their hidden frequencies and use them to move liquids and other matter. In the process I always try to test the limits of the media I am using and reveal their stochastic potentials. I film transparent objects in the water while trying to capture the organic look of the form through its movement and shape. I experiment with different materials, especially with various types of semi-transparent objects, exposing them to different light frequencies. I work with field recording, stretching and modulating sound waves to reveal their hidden frequencies and create new sonic experiences. I always have a recorder with me to catch the sounds I encounter on my way. At the moment I’m focusing on industrial sounds of the city. The audience can interact with the installation by touching found objects which are connected to the circuits and trigger sounds. When performing I use a FM synthesizer to make drones with low frequencies. Sound stimulates the surface of water that refracts light from LED lights revealing patterns of the reflections which are filmed with the micro camera. The effects for video input are applied in a software and the result is projected to a chosen surface. 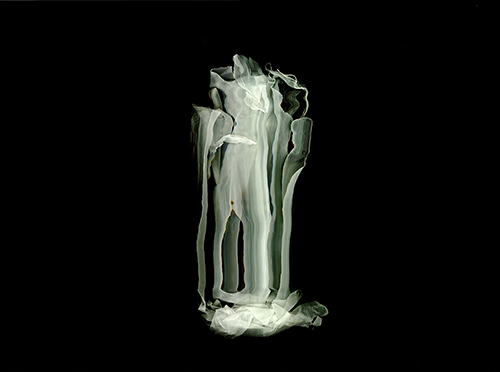 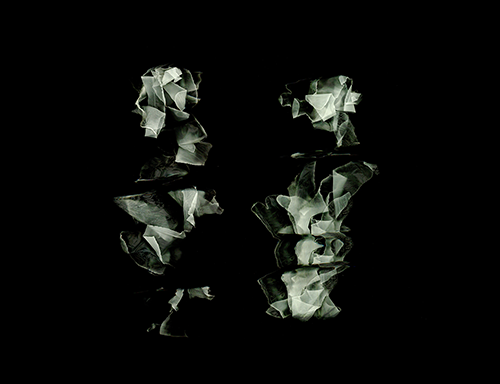 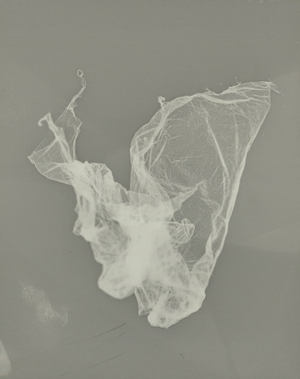 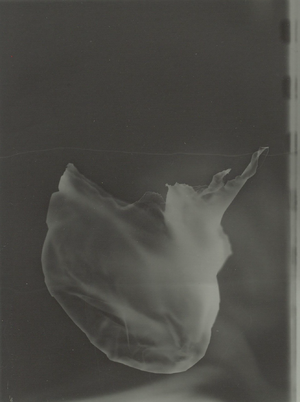 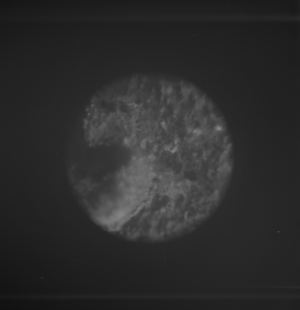 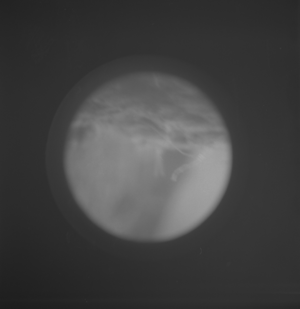 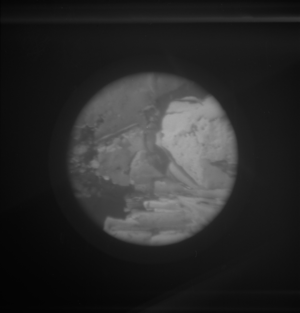 My work invites the spectator to explore the process of creation of new personal mind states. I want to give the imagination a chance to travel and distinctly perceive reality through different media. I try to reshape the comprehension of conventional environments and give an alienated sensation that is out of ordinary human social experience. The spectator should notice the subtle and hidden possible dimensions around us. How do we interact with subtle physical phenomena that creates, modify and move matter and light through the space? How can we expand our physical and mental perception over the borderlines of our ordinary truth? How could we feel in a body or mind state that doesn’t feel human? What are the archetypal forms that are revealed through the lens? This year I started to work with slit-scan where I experimented with transparent materials. With same objects I made a series of photograms. I placed layers of plastic in the aquarium to let the water create shapes and movements. I tried out different kinds of light to reach the right consistency and impression to transform floating objects into organic forms while playing with the mirroring surface. This is how I made my first short film The Pursuit of Anomalous Mind Habitats which won the award for best work in Art Research Lab in the Eye Filmmuseum Amsterdam. I made a DIY focal camera with a microscope lens and shoot a series of micro landscapes. I will use them to make a scientific photobook with data and calculations that seems to come from another civilization and time, all written in a cryptic language. Every micro landscape will be connected to a soundscape made by modified samples from field recording. The spectator will be able to access to the soundscapes by scanning a QR code. I am experimenting with micro cameras, filming and examining found objects while giving them a new visual form through softwares.

Even though I’m working on the same esthetic, mine is a continuous research of imperceptible micro and macro dimensions; an experimentation with transparent objects, light, water and sound through analog and digital medias. I observe the behaving of the same object through different techniques. At the beginning of the year I started to work with slit-scan where I tried out many different kinds of paper, plastic bags or wrappers. I used the same objects to make a series of photograms. I put plastic layers in an aquarium full of water to see how the water can create a shape and movement and filmed it. I tried out different kinds of light to reach the right consistence and impression to transform floating objects in organic forms. I played with the mirroring in the water and frame rates. In meanwhile I also made a DIY focal camera with a microscope lens and shoot a series of micro landscapes. With these I want to make a scientific photobook with data and calculations that seems to be from another civilization or time, a crypted language that no one can read. At the end I will create a soundscape using modified samples from field recording for every landscape. The spectator will be able to access to the soundscapes on my webpage through a QR code.

//What do you want to make next?

The latest instrument that I got in my hands is a waterproof micro camera. I can stimulate the water surface with sound frequencies and film the movement. I want to experiment with different liquids and small solid materials. I will continue the experimentation of micro and macro universes with plastic, light and water adding the sound. How can I move the matter with sound? What are the patterns that reveals to the lens? How can I influence on the output through different softwares? I will to merge my previous concepts of cybernetics and physic phenomena with my recent research on alchemy and other old forms of science. The alchemy is not only connected to chemistry, but it has a double meaning which is connected to human mind and spirit. I want to relate old sciences to cybernetics, system biology and physical phenomena. I want to find my own crypted language and materialize it in miscellaneous forms of multimedia. I want to translate my mind-spirit exploration and experience into coded images and symbols using abstract forms of archetypes.

Since I moved to Rotterdam I have made many connections inside and outside my school. With my schoolmates we made a new art collective to expand our visibility by organizing screenings, exhibitions and performances. I curate exhibitions where I invite artists based in Rotterdam and from other countries. I enjoy working as a curator. For me it is fundamental to connect people to create new realities where they exchange the ideas and points of view, expand their knowledge and upgrade their vision. I don’t make connections only for interest; I need to work with like-minded people to feel part of an emerging progressive force which creates innovative solutions, forms of art and society. Why do you want to make it? I want to continue to expand my artistic laboratory to create more complex forms of organisms and environments. I want to involve different kinds of matter and study the interaction between them in various conditions and reveal the result in it’s pure form. What interested me the most is how they behave between each other and what are the forms they create and shape inside merging edges. I am the alchemist that experiments with the Elements while achieving new knowledge from old and new sciences, drawing new perspectives of reality while trying to be in balance with the subconscious, spirit and mind state, developing instinct and personal growth and creating new progressive forms that will shape the future forms of life. 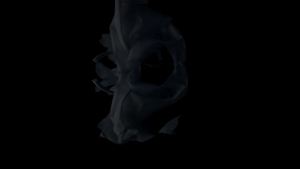 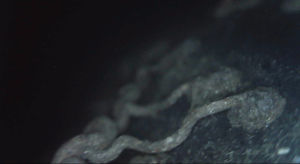 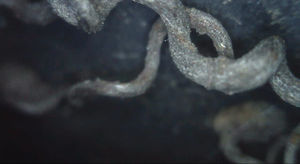 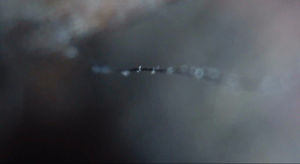 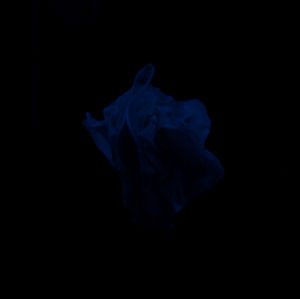 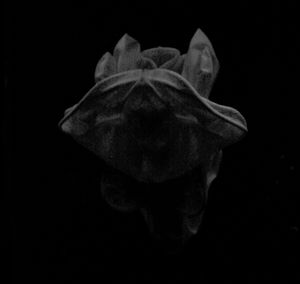 //Relation to a larger context

Many artists, philosophers and scientists have been questioning the phenomena of light and sound. Can they be produced from a single source? The ancient philosophy explained the equivalence of colors, shapes and sounds through cosmologies, defining numerical relationships as their common point of reference. The experiments with sound-image analogies brought all kinds of apparatus. Carsten Nicolai is creating his own visual and sonic vocabulary at the junctions of the art, natural science and technology. The scientific method and aesthetic practice meet at the level of experiment. He reassembles the alchemist who is intrigued by the aggregate conditions of different materials, their transformations and their mathematical orders, investigating microscopic structures and their macroscopic equivalents to synchronize light and sound and formulate a relationship between seeing and hearing in new ways. (Carsten, 2013, p.11-12). ‘’It is not the encounter of two essentially disparate elements that here provoke the strongest poetic impact; it is the worktable itself, the laboratory in which the artist reconfigures the elements’’. (Carsten, 2013, p.12). Carsten claims that our five senses are a coincidence in our evolution. In his work he transfers the inner synesthetic experience from an organic space of human brain to the external, inorganic working of machines. Experimental prototypes that permit complex perception through latest technology (Carsten, 2013, p.33-34).

Pickering, A (2010) The Cybernetic Brain Sketches, The University of Chicago Press