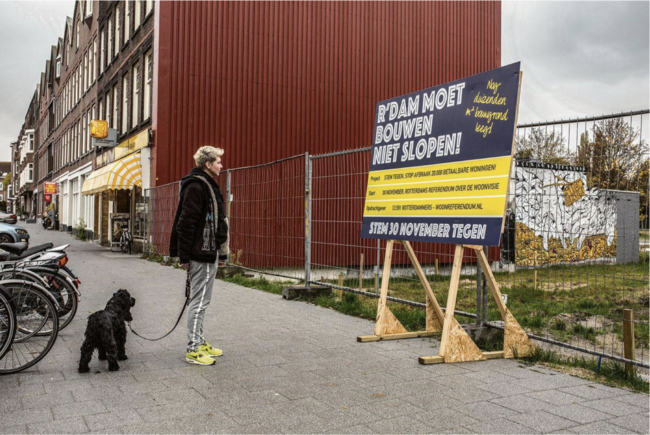 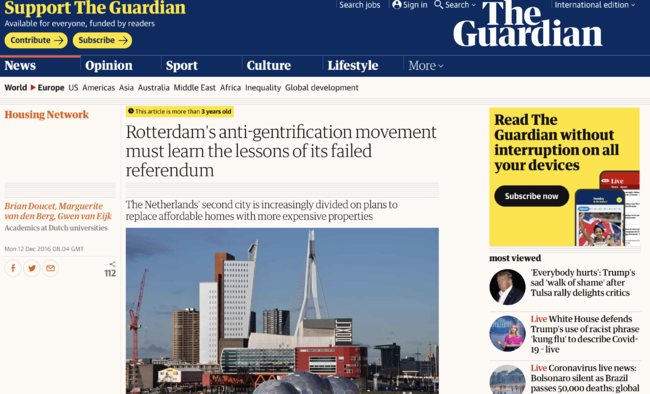 On Thursday, Rotterdam city council will vote on whether to replace 20,000 affordable homes with 36,000 properties for middle- and upper-income households.

The vote is the latest step in the city’s focus on “improving” neighbourhoods, by combining gentrification with rules preventing some low-income households from moving into poorer neighbourhoods.

Rotterdam, the Netherlands’ second city, is an increasingly divided one: while many neighbourhoods around the centre are gentrifying and the city is a rising star on the international tourist map, it is also home to some of the country’s poorest neighbourhoods.

Late last year, a diverse grassroots movement emerged to oppose the city’s housing plans. A petition calling for a referendum obtained more than 13,000 signatures, resulting in a vote on 30 November.

But the odds were stacked against the referendum. While organisers wanted a vote on the potential disappearance of the 20,000 affordable housing units, the question they posed to Rotterdammers wasn’t clear. the vague nature of the question: “Are you in favour or against Rotterdam’s housing vision?” was likely to have discouraged many people from voting, because they didn’t fully understand what they were voting for.

The city also stipulated a 30% turnout to validate the referendum. Because those in favour of the housing vision could win based on a low turnout, there was little incentive for the yes campaign, including the city’s government, to encourage people to vote.

In the end, 72% voted against the housing vision. However, only 17% of the electorate voted, well below the required 30%. The council vote this Thursday, 15 December, is expected to ignore the referendum and find in favour of adopting the housing plans as official policy.

The grassroots campaign offers several insights for those dealing with gentrification in cities around the world. Tenants’ associations, while active in initiating campaigns, need to do more to engage with people in their communities. Participation levels in these associations are very low in Rotterdam and a primary objective for this movement is better organisation of residents, particularly tenants in social rented housing. 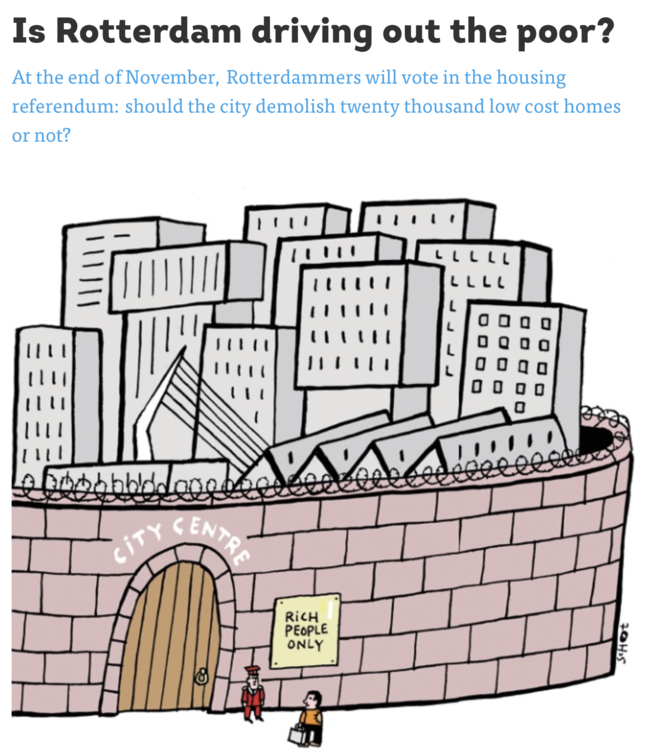 Gentrification is one of the biggest forces shaping cities and neighbourhoods and a central strategy for the neoliberal remaking of urban space (Kallin and Slater, 2014; Paton, 2014; Smith, 2002). In many policy and political circles, gentrification is heralded as the saviour of cities and is framed as both necessary and as the opposite of neighbourhood decay (see Davidson, 2014; Duany, 2001; Rotterdam Municipality, 2007, 2016). Critical scholars have described this as a ‘false choice’ binary where gentrification has:

left residents of low-income neighbourhoods in a situation where, since they exert little control over either investment capital or their homes, they are facing the ‘choices’ of either continued disinvestment and decline in the quality of the homes they live in, or reinvestment that results in their displacement. (DeFilippis, 2004: 89, as quoted in Slater, 2014a: 518)

Dominant discourses in gentrification research tend to also be polarised and support the idea of ‘winners’ and ‘losers’. Empirical studies reinforce this by focusing either on the gentrifiers themselves (e.g. Boterman, 2012; Butler, 2003) or those displaced or under threat of displacement (e.g. Atkinson, 2015; Huisman, 2014; Kern, 2016; Sakizlioğlu, 2014). Perspectives from those who live through gentrification have, until relatively recently, been less engaged with. Two prominent gentrification scholars, Tom Slater and Damaris Rose, have separately called for more research into the lived experience of gentrification:

My purpose here is … to point out that there is next to nothing published on the experiences of non-gentrifying groups living in the neighbourhoods into which the much-researched cosmopolitan middle classes are arriving en masse. (Slater, 2006: 743)

Our trio of case studies leads us to strongly endorse recent calls for critical gentrification researchers to pay more attention to how the power geometries of the latest incarnations of social mix will play out between the different groups in public space. (Rose et al., 2013: 447)