Read texts always with my work in mind, making parallels. The way to go about reading theory: Derive from my works, my thougths, make them central. Everything else and other is an extention, branching out. Necessary only as a contextualization, a point of reality check and reference, perhaps a source of inspiration.

Interconnections between texts have to be somehow established. This is the backend. The front end, I imagine, will be the final written thesis (as a summary and a static articulation of the research process).

Karen Barad: Posthumanist Performativity: Toward an Understanding of How Matter Comes to Matter

//&link: Barad production of bodies,... To Foucault (body can be controlled+later: industrial revolution) and Mauss (techniques of the body).

People become aculturated to them. External control and internal compliance is considered as normal and necessary. It is the seed bed for orthodoxy. Formative influence on philosophy, political thought and government (China). Aculturation of population through prescriptive technologies. Beyond production of material things.

The cyborg is a crutch that allows her to walk.

The Informatics of Domination 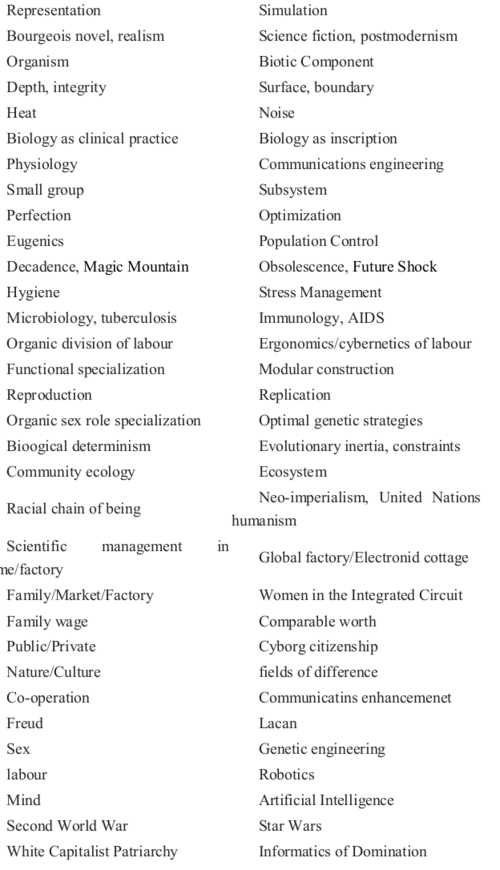 The 'homework economy' outside 'the home'

Women in the integrated circuit

Cyborgs: a myth of political identity

From Cyborgs to Companion Species

Alternative to the various versions of post-humanism ... Coming to terms with multiple decenterings/wounds to narcissism that the ontological human had to suffer:

companion specisism - accomodates the four wounds to the ontological of the human. (machinic+organic+humanic)

shut up and train

Marcel Mauss: The techniques of the body

Chapter One: The Notion of Techniques of the Body 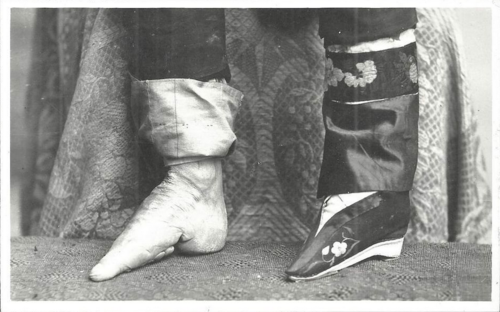 Chapter Two: Principles of the Classification of Techniques of the Body 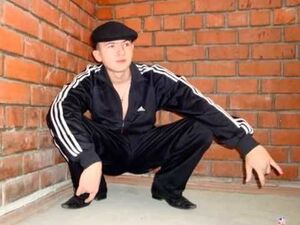 bones is simply the result of certain forms of posture and repose." pg. 8

he does not make a certain gesture and does make a certain other gesture neither the physiology nor the psychology of motor asymmetry in man is enough, it is also necessary to know the traditions which impose it."

Chapter Three: A Biographical List of the Techniques of the Body

presupposes an enormous biological and physiological apparatus. [...] But in general they are governed by education, and at least by the circumstances of life in common, of contact. [...] there are two big questions on the agenda for psychology: the question of individual capacities, of technical orientation, and the question of salient features, of bio-typology [...]" > psychotechnics. pg. 17

movements, domination of the conscious over emotion and unconsciousness." pg. 17

Ulises Ali Mejias: Off the Network: Disrupting the Digital World

&paranodality (Mejias, later in the text)

Part One: Thinking the network

The Network as method for organizing the world

Chapter 9: The outside of networks as a method of acting in the world

The Privatization of Social Life

"In other words, the commodifcation of the social in digital networks, the process whereby our social lives are subordinated to the logic of nodocentrism, can both open and close productive forms of sociality that challenge capitalism. One way to talk about these contradictory effects is to talk about the dual processuality, or double affordances, of networks. As Jan van Dijk observes, networks make two sets of outcomes possible at one and the same time: a scale expansion accompanied by a scale reduction, more freedom of a certain kind but more control of another, more openness at one level but more constraints at another, and so on. Alexander Galloway describes a similar tension between two opposite but complementary dynamics that play out in the protocol or code of digital networks: one that “radically distributes” control and another that “focuses control into rigidly defned hierarchies.” (footnote 11: "Galloway, Protocol, 50. The author argues that “at the same time that it is distributed and omnidirectional, the digital network is hegemonic by nature; that is, digital networks are structured on a negotiated dominance of certain flows over other flows” (75).") The double affordances in digital networks make possible dual processes to be present at once, which is why the commodifcation of the social might look very differently depending on which angle one is looking at it from."

Participation in the network is a template for being social, for belonging. It is perceived as socially rewarding. It gives the illusion of making us more social. In the disciplinary societies of the nineteenth century, the self was actively molded into conformity by institutions external to the body, like the factory or the school. The participatory culture of the digital network has more in common with the society of control, where the desire to conform emerges from within the body. By setting the parameters for inclusion, the network episteme perfectly expresses this new architecture of power. No external institutions are required to enforce this episteme because it is affirmed through our personal use of technology, establishing the network as the main template for organizing and understanding the real. pg. 25

&Not society of the spectacle, but society of control (=?) &Foucault (discipline and punish)

Simon Yulli: All Problems of Notation Will Be Solved By the Masses

Boris Groys: The Loneliness of the Project

Roland Barthes: From work to text

Albert Camus: The Myth of Sisyphus

Mazuir Rafal: The dao of improvisation=

//& Link to Franklin, she says the same about technology and its implications!