After finishing my bachelor thesis (september 2019) that encompassed all my thoughts and systems of thinking, it is time for me to continue. The construction of my further research and actions seems somehow more complex, as I have in the past year deeply rationalized all the previous works, that were before constructed more intuitively and reactionary to the occurences I had noticed in my surroundings. Now, I am searching for a new tactic to employ - one that would take into consideration everything already figured out and start from the position of knowledge and insight that I hold now, in this very moment, invisioning a future fold-out and reconfiguring my mission that does not have to be so basic anymore, but I also have no idea where it will take me. Continuity, decisiveness and focus are cruicial.

This is a collective process of articulating and [https://pad.xpub.nl/p/space1 collecting tactics] of being in (public) space, ran primarily by Tisa N. H., Ursa G., Blaz S. and Janja K.

The practice is fueled by the fast changes (turistification and gentrification) that we experience daily.

In order to reclaim the public space that belongs to us, we believe, we must become sensible to it. Here the tactics that we propose play a crucial part, a research tool. They are continuously being re-written and also performed/exercised/tried out by us and our friends.

We are thinking about ways on how to reach more people with the propositions of tactics, invite them to exercise them and improve them, gathering "pataphysical" & other subjectively sourced data (in the form of thought, concept, text, sound, photography, video etc). Reaching out (for now) happens within our circles of friends. The best way to make this practice public would be through conducting workshops, especially with already established groups (such as scouts, or crews of any kind).

The acquired data serves as a source of inspiration and relevancy for the construction of concrete responses - whether they are interventions in the public space, the way our interaction with it changes, a text or an artwork, a public talk, a collective activity or any other.

This project got some funding from the city of Ljubljana, Slovenia. 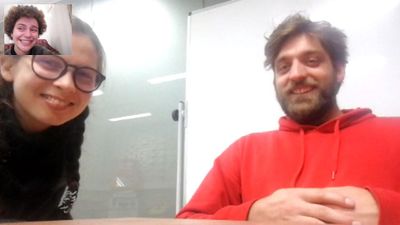 Meetings and working sessions are held via video, as we are ~1000km apart geographically, ~0km apart conceptually.

Can be programmed. But why? And in what way? What is the meaning of it, it's final goal? What does it tell about the world?

If programmed - it has to have a hardware "externality" - the input of the signals could be radio FM receiver:

Fantasize on possible end results: Is it chaos? Is it conformity to the general sound parameters found in the mainstream? Does it go agains the mainstream completely - denying and contrasting it.

Improvisation and machines? It is not randomness. It is not chaos. How could improvisation protocols be "translated" into intuitive-machine learning processes? (Really? Call Dre or smth -> check meta, check 50?)

Inda told me about this technique of composition - when you lack inspiration as a composer. You take three catchy refrains from known songs, transpose them all into the same key, and then shift around the notes, collage a little and here, you have a new catchy song. 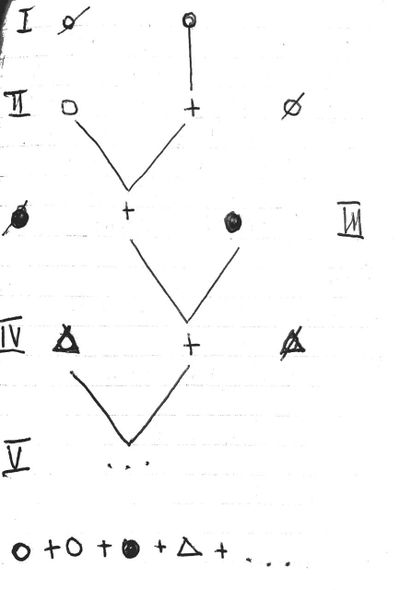 collect the material, choose the collaborators (human or machine?), write about it #todo 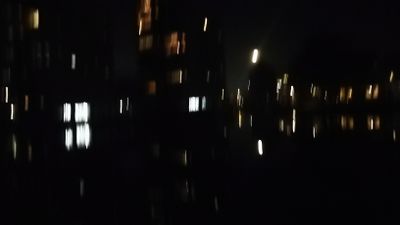 gestures takes from the minizine (or gathering new material), then played on a string instrument (cello). Making musical greeting cards out of the recording?

Txt to speech with my own voice -> at Klankenbos I met Melia Roger who did smth like that for her thesis. here

performativity of text. performative lecture. poetry. Also my own sound/general art work. Where does it go?

From the lack of abstract, metaphoric, conceptual exchange comes the urge to find possible channels of communicating ideas and reflections.

Why be ashamed of thoughts?

Channeling and making thoughts publicly accessible, by that entering the possible field of inter-exchanging and reflecting. By that letting conceptual loneliness behind, producing conversation.

I finally got some time to get this correspondence started. Hopefully we get to bigger depths as we go along.

I. We were in a smokey, late night underground club, after some sessions at a conference of improvised music and a friend said: "But you know, we always improvise. Everything is an improvisation." This kind of hit me as a statement, a state of being. Especially a specific kind of awareness that one can have about reality, extending the notion of improvisation outwards. Honestly I was in a shock, my reality somehow assembled, all I did was laugh from this sudden epiphany, this thought being so familiar, as if I have had it before, but then forgot about it. How would you personally respond to this thought?

All for now. Did I start this right? Better one than many?

Response to the first email:

Ciao, I think it can be a good start since the question is in bold. So, First of all we need to understand what improvisation is not, and why we invented a concept like that, that basically is how normally human brain works: reaction to single or multiple events, chosen in real time in reference to a solid or liquid system of rules, in order to give or express significance. The point is that a system of rules can sometimes be too hard to handle in real time, and if we want to do things that are relatively too complex we need to write or decide them first. And this is what improvisation is not, something that is determinated a priori. For anthropological reasons, we need to learn to improvise in social relationships; in order to avoid a deepening on survival and evolution criteria in western society, we'll just say that it's not considered necessary to learn improvisation for non social contexts, like the musical one. But things are more complex: now that we ipotized what improvisation is and is not, let's take a look to the combinations. If we, for example, consider the etiquette of behaviour, we can see how strictly this "system of rules" can be; would we say that it's still improvisation? Well, we could: it has ethical (=aestetichal) rules for phisical and verbal languages in relation to the context, and moments of free improvisation during the dialogues to speak about certain topics in a more or less defined way. Doesn't it remind us anything? Like jazz standards for example?

This is a field recording that archives the sounds of the Maastunnel (a tunnel under the river Nieuwe Maas in Rotterdam, NL) before being renovated in November 2019. I presume that after the renovation, these sounds will disappear, being exchanged for sleek, buzzing sounds of newer stairs. The sound is transient, the memory of it feels like a forgotten dream. 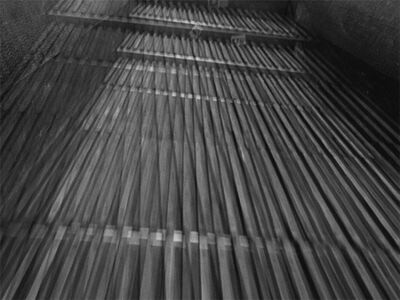 11-10-2019, 1-3 am, Radio Tonka, den Haag I was invited to the Club Res radio show at Radio Tonka, hosted by Kassen Oud (whom I have met and interviewed at Dutch modular fest) and Rob Bothof. I interviewed them about their show (meta moment) and then we had an improvised session live on air. add #todo report & audio recordings (edited?)

pad, transcription of composition available here and #todo add the sound recording of the thursday after rehearsal and the performance. 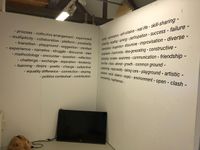 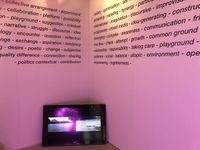 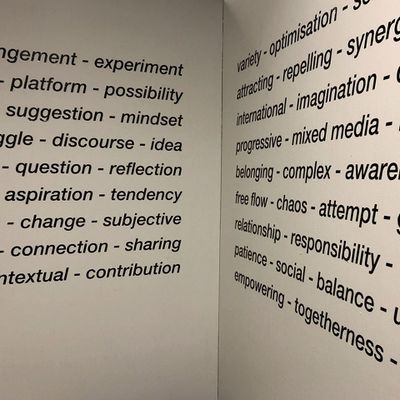 temp.tc (temporary transborders collective) was a collective process that took part in the Transborders festival, from 18.8. to 1. 9. 2019. A group of 19 young artists that were invited by the three curators of the temp.tc (Nina Selina Kern, Vania Geier and Tisa Neža Herlec) inhabited the castle Cmurek, on the border between Slovenia and Austria. Creators of a manifold of diverse practices and approaches have joined forces in order to explore cohabitation and co-creation, collaboration in the time of predominant individualisation and alienation. Thinking collectively, communication was crucial, decision making joint. The intense process that we fostered was pet-named as Kunst Banda or Schloss Kinder. The form of temporary collectiveness that we have been striving for presented each individual the challenge to be empowered, to overcome their own personal boundaries (of intensity, stress, idea-sharing and even sanity) in order to construct a fluid structure of our everyday together. We were strongly influenced and inspired by our surroundings, the context that we have found ourselves situated in - the fragile border, the majestic river Mura, the castle, its complex history and its stories embedded in the walls. Improvisation, communication and collaboration were the principal strategies that we employed, simultaneously developing our own methodologies and forming friendships and creative connections that will, we believe, resonate in our future artistic pursuits. Completely submerged into the process and the context, we have created many works of art and strains of thought that were presented on the first day of September, as a performative exhibition-in-process that took visitors on the path inside the castle, catching glimpses of what temp.tc was and could be. We have not attempted to be productive as such, our attention was given mainly to the quality of our process of creation, shared and experienced by ourselves and others. temp.tc were: Anna Sophie Adelt, Aljoša Dakić, Evelina Hägglund, Armin Imamovic, Eirik Jahnsen, Sascha Knebel, Johannes Lakinger, Bernadette Laimbauer, Henna Nerg, Ljubica Petrović, Ksenija Tomić, Sonya Woodruff, Morten Yoo, Jonas Žabkar, Miriam Roithinger, Mascha Illich, Vania Geier, Nina Selina Kern and Tisa Neža Herlec.

(Description written at RWRM session #1) River is an object, an artist book. A diary, written by the river itself, interspersed in 9 chapters. Loosely constructed, black duct tape is preventing it from falling apart. Each turn of the page unravels a block of hand-written text on the right, juxtaposed by a drawing, resembling the natural flow of water, peculiarly dried up and static on the left. While thumbing through the pages, the hands of the beholder get stained by the materials used.

From imagination into words, the personified river told her story fluently, without thinking twice, writing automatically. I didn’t have to do much, her stories have been present for centuries. Then big drawings, made out of natural materials such as charcoal, coffee grounds, soil, dirt and water were cut into equally small pieces. The wilted material opposing the fluid, ethereal subject matter. Bound together, it was put on display in a former mortuary, a place of memory.

The border river Mura served as my refuge for two weeks, while I was involved in a collective process temp.tc, somewhere in between Slovenia and Austria. Bathing in its waters, observing its ever-changing states and gradually becoming aware of its past, present and future - political denotations, the shifting roles the river plays, the human-made constructs imposed onto her. She was screaming to utter, without possessing language. I became the conductor of her content.

photos of the book here

text of the book here