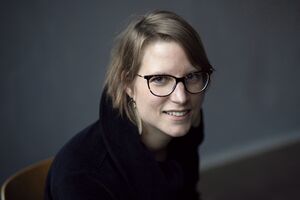 Tessel Schmidt (1983, NL) is a video artist (Piet Zwart Institute Rotterdam 2022) who stages scenes from everyday life. She makes set-ups of liquid everyday materials that she captures with her macro lens. The macro landscapes that arise then often represent something bigger. She also likes to put her camera on people. By using long images in a static frame, the viewer experiences change and transience. Her work increasingly revolves around the mental strength and resilience of people. She is interested in how people give meaning to their lives and what they do to overcome sadness, pain and anger and bring positivity to their lives. How do people look for mental challenges or how are their minds challenged by certain life events? How can the mind direct the body? And what can we learn from this? Tessel interviews people, build small set-ups with (liquid) materials, gathers images, investigates, and experiment in the edit with all these ingredients to eventually try to catch a feeling or come to an essence of the subject. She moves between the everyday and the spiritual by pointing her camera on everyday liquid materials, combining this with a chosen subject. With her films and installations, she stages a space with elements from reality. Her films are open ended and run in a loop. In the edit, but also playing with video projection or multiple screens in the exhibition space, the work will take shape.

As a videographer I am always looking for the story and how to choose my shots and decoupage to fit the story the best. Most of my assigned video work is story driven. During the years I developed a specific filming method containing series of small clips, filmed (extreme) close-up, showing colors, textures and movement (see instagram.com/tesselschmidt). I call them now macro landscapes. Most of the clips I use as visuals for music performances. But I would like to find a way to unite these tactile images with telling stories. Is it possible to make an image driven documentary work using my filming method? When do I loose the spectator? How can I immerse non-fiction stories? And can I make a work in which the story and the aesthetics of the images are equal? My main research question for my thesis is therefore: How do I bring the documentary narrative together with my 'macro landscapes'? This research is of relevance for me because I want to unite my deep interest in other people and their stories with my own macro filming method. How do I describe my filming method and what are the ‘rules” for my kind of framing, perspective and camera movement? In the proposed work I want to make a combination of real stories by woman, poetry by Tesselschade, macro images of glass engravings and sound.

Before entering the Piet Zwart Institute I made a work filmed in the carwash. The chosen frame and perspective create a new world within the frame.

I also experimented with filming shadowflicker on my walls at home caused by the blades of a typical Dutch windmill in my garden. I have been working on a treatment in which I tried to unite the images of the shadows with stories of people who suffer from shadowflicker in their homes. I have not finished this work yet.

During my first year at Piet Zwart I bought a macro lens to get even closer to my subjects and made some experiments with it. I made a video work with buttermilk dripping down a surface creating an image that brings the viewer to a secluded place in the snow. With this work I also experimented with sound. I started with adding music, but that made the work too bombastic. I searched for sounds of ice, melting ice and ice floes and edited under the film. That worked out very well. Especially when the video was shown in Eye museum on the big screen.

I also filmed bath foam with my macro lens. I love the structure of the foam and it’s popping and often assembling bubbles. I put my camera in front of a small amount of foam and kept filming to see what happens. In the first video the auto focus was on so the camera starts later on focusing on the curtains. A surprising moment! I wrote a text about this video from the point of view of my camers: Me, the camera In the second video (screenshots) I made a set with very small bubbles who in 30 minutes start sticking together more and more and becoming bigger bubbles. At the end you see the wonderful structure of the bubbles. This work is still in progress.

Last year I was as a videographer involved in a theatre project with refugees who live in my neighborhood. I started to interview them and tried to catch their emotions around the trapped situation they are in without filming their faces directly. I filmed with my macro lens very close to the skin (Samson’s hand) and in the edit experimented with more screens (triptych) in one frame. I used their voices as a voice over. This led to a series of very short clips.

In the summer of 2020 I did a testshoot with fisherman. I filmed the fisherman waiting to catch a fish and catching a fish. I am now working on a proposal for the municipality of Utrecht to get the project commissioned.

Another attempt to express a feeling of a situation (being in lockdown with my son at home) in a video work is Kid. I made close images of my son’s toys (toys that have movement) and mixed the images and original sounds in a triptych projected on cloth diapers hanging the wall. Video Kid1 is what the viewer would see in a exhibition. Video Kid2 is the images that is being projected.

I tried to explore this way of working already a little bit with the clips I made with refugees, especially because I was not allowed to film their faces. The challenge is to look for images that complement the stories and express the emotions from the stories. A few weeks ago I visited refugee Samson at his room in the refugee hoe (AZC). I shot small videos of details in his room and recorded our conversation. Samson also started to read out loud the cards he received during his period in prison (when there was no other place for him to stay). I made 4 edits. The first edit is the voice over of Samson and images of details in his room (still rough edit). The other 3 video's are an edit from what I think is the best shot I made there combined with 3 different soundscapes. I must say that my experience was not so pleasant at the refugee home. I wrote a text about it in Dutch. Her you can find the text: Dear Samson

I decided not to go on with depicting the stories of refugees for my final project because I needed more time to get my intentions right because the topic is very fragile. On my wiki I uploaded some new experiments I shot with Samson at the refugee home were he lives.

So distilling the elements from my previous work into a few words it would be: Neighborhood, macro images, people’s story’s, emotions, new landscapes, importance of the still frame, let it happen inside the frame, expressing a feeling of a situation, triptych, making a set-up with a material.