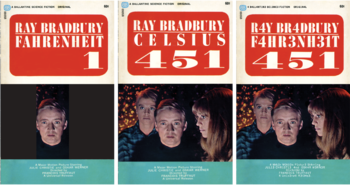 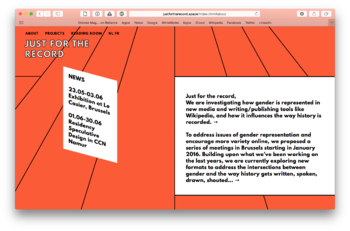 As a publisher, I have always been fascinated by the culture and the sociality of the internet. When it comes to online interfaces, who is being served? What power structures are we sustaining? And how do we design platforms with an attitude?

I want to apply these questions to the context of my home country Indonesia, where social media in particular has become inseparable from youth culture. Millenials like me use it to access information, perform their identities, and engage in alternative political discourse. At the same time, rising religious and political conservatism is putting immense pressure on freedom of expression in the country. With this project I want to explore the way social media could be used as a critical and feminist tool to resist these trends of state and self-censorship. First, I want to take on the role of researcher. What can I reveal about the way certain conversations and images are being shut out of these platforms? How do the self-censorship habits we have offline, manifest themselves online – and how do they affect women specifically? And then: can I talk back to these problematics, and propose new collective practices to engage with them? In this way I also aim to position myself as a facilitator.

Examples of existing projects which inspire me, include artistic interventions like Stephanie Vilayphiou’s Blind Carbon Copy Through a series of simple but critical hacks, she reveals to the reader the mechanisms of copyright (another legal barrier to knowledge). When it comes to platforms and services, I look to the likes of Just for the Record, Sisterhood, Ethira, Mastodon and Bibliotecha, for the way make space for new dialogues and networks, and how they explore the design of trust.

My motivations for this project are both personal and political. After 8 years in the Netherlands, I plan to move back to Indonesia next year. But recently I’ve noticed an alarming trend in Indonesian public culture: while the number of media platforms seem to be growing, the scope and diversity of discourses seem to be shrinking. New, stringent laws on issues like pornography, blasphemy and defamation, combined with rising religious intolerance in society, has slowly cut away at freedom of speech in Indonesia. In fact, according to a recent index on media freedom, “Indonesia was the worst-performing country in 2017, falling by 20 places in the global rankings from 48th to 68th position.” (The Economist Intelligence Unit, 2017). Worryingly, I don’t see these issues being talked about enough – neither by mainstream nor alternative media. As a publisher who is also non-muslim, female and biracial, I feel an urgent need to challenge these mechanisms of suppression.

Following this, I chose to focus on social media, which has become a fundamental part of daily life for urban Indonesians. According to a 2018 digital report by We Are Social, Indonesia has the fourth-highest number of Facebook and Instagram users in the world, and the fifth highest on Twitter. Thanks to its velocity, its polyvocal and participatory nature, social media represents a valuable space for young Indonesians to express and engage with political and cultural issues. However, it’s becoming clear that free and critical discussion on these platforms need to be actively maintained – and defended. What if we could set up a community and a toolkit, to troll the trollers, manifest the missing voices, empower the ‘almost-speakers’? In a country which is becoming more sensitive to dissent, I would love to offer resources and invitations for young women to engage with issues of online censorship, and to explore social media as a tool for radical and collective publishing. 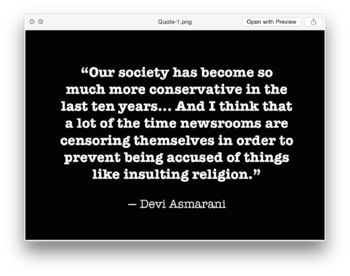 Quote from the editor of Indonesia's first feminist magazine 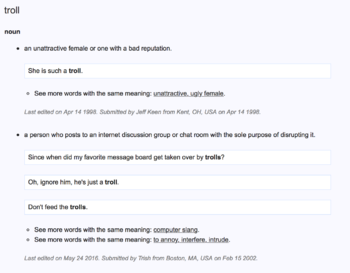 Definition of 'troll': Who are they and what are their tactics?

Like many countries around the world today, Indonesia is at a crossroads in its political and cultural evolution. In 1998, the authoritarian regime led by President Suharto collapsed, allowing the country to transition into democracy. Unfortunately, in the power vacuum that followed, media freedom (in both digital and print) has been difficult to sustain. One of the most influential forces creating a backlash today, is the rise of religious extremism. Divides in society are becoming politicized, and the moderate branch of Islam Indonesia was once known for, (and the one I remember growing up) is losing out to a much more conservative, restrictive version. Some reports warn that, "Islamist conservatives are in many ways the local equivalent of America’s alt-right – and they are just as adept at online disruption and manipulation." (Lindsey, 2018). For a young democracy which is heading towards another presidential election in 2019, these trends are worth questioning.

One of the most acute symptoms of the current climate is the spread of (self)-censorship. Throughout the last ten years, the state has intensified its censorship activities, drawing up legislations which inhibit freedom of speech and religion (Heryanto, 2018). According to a 2017 report by Freedom House, under the current administration of President Joko Widodo, “religious and other minorities face ongoing harassment and intimidation, often with the tacit approval of local governments and security forces”. Online, social media platforms become heated battlegrounds. This fear of harassment often leads to netizens self-policing and self-editing.

At the same time, organized interest groups take advantage, like the Muslim Cyber Army, whose militant members work to spread hate speech and troll opponents online (Juniarto, 2018). In this way, many subjects have become taboo, like the public expression of minor faiths, female agency and sexuality, LGBTQ rights, or indeed any discourse which is seen as a threat to Indonesia's muslim identity.

These issues are also relevant beyond Indonesia, as politics becomes more polarised across the globe, and social media becomes a more contested and dangerous place for journalists and citizens alike. Today, governments have been known to take an aggressive hand in shutting down digital channels used to by activists against them (Hempel, 2016). Many are even employing propaganda techniques (including astroturfing, trolling, buzzers, paid ads, using imitation accounts) on these platforms to direct public opinion (Ressa, 2016). In the context of online abuse and hate speech, women are especially vulnerable, with “studies have consistently shown that attacks against women online are distinctly different from men’s. Threats against women are often sexual, meant to assert dominance, silence and intimidate." (Gutierrez, 2017). Under these pressures, I think it's important to find critical and playful ways to redress the balance. Feminism has had a long history with self-publishing in print – why not on social media? First, I will conduct a close-reading of the problematics of social media in Indonesia. Specifically, I want to analyse the strategies used by different actors to limit the expression of women's ideas and images. Where is there a lack of representation? What are the barriers to critical conversation? Then, I will research existing modes of resistance, talking to as many relevant figures in Indonesia as possible. Interviews will be an important part of my research.

During this time I want to continue last trimester’s experiments of prototyping software that encourage new ways of reading and sharing information. For example, could I write a programme which helps me analyse the indicators of self-censorship in comments sections? Something like Politwoops – using Selenium and html5lib – that scrapes comments periodically and saves each one that has been deleted? Then, can I sketch out ways to republish these missing dialogues?

I've also recently come across social media profiles specifically aimed at Indonesian women ('akhwat' which translates to Muslim sisterhood) which offer 'Account-deleting' services. They target young women who have recently started wearing the hijab, and tell them they must erase all evidence of their previous 'sinful' lives – including any avatar or photograph of themselves pre-hijab.

For me, this represents a kind of social censorship, a literal erasure on the images and histories of Indonesian women. Could I collect more of these missing voices and identities, and develop a practice to reassert them – learning from the very tactics used to suppress them? Finally, I plan to learn more about web and mobile application frameworks like Django and Flask, so that I can prototype my own platforms. 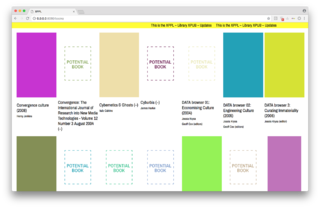 In my work, I like to explore the way netizenship and citizenship inform each other. This often means looking at the interactions betweens online and offline, and between technology and society. During last year’s Poortgebouw project, I also grew an interest in archiving as a political practice. Some of the questions I had then are still relevant to my research today: What are the politics of representation and of erasure? How can I best tell stories from communities in precarious contexts?

This urge to make visible what is usually not, was amplified in my next project, for the Special Issue OuNuPo. Feminist methodologies became an important part of my research, which I used to question the idea of technology as a neutral practice. What cultures do we reproduce when we write programmes? Who is included / excluded in the process of knowledge production?

I continued these explorations in the Interfacing the Law project. In designing the XPPL’s search engine and its social modes, I was focused on the following concerns: Can we design interfaces that are able to locate outsides and explore uncertainties / potentialities? What does it take to create democratic and open structures online? Many of these interests come together in my graduation project.

Clara Balaguer, for her experience as an online troll, and in running an alternative publishing platform in the Philippines. Amy Wu, for her knowledge on censorship in China and the political use of new digital media (memes, social media etc.) Artist Reinaart Vanhoe, for his connection to Indonesian collectives like Ruangrupa, Kunci Cultural Studies and Jatiwangi Art Factory. Other Indonesian platforms currently working in the intersection of media, technology and culture, such as Forum Lenteng, Lifepatch, Magdalene Indonesia and Perempuan Politik (Women in Politics Indonesia).

Juniarto, D. (2018) The Muslim Cyber Army: what is it and what does it want? [online]
Available at: http://indonesiaatmelbourne.unimelb.edu.au/the-muslim-cyber-army-what-is-it-and-what-does-it-want/ [Accessed: 11 Nov 2018]