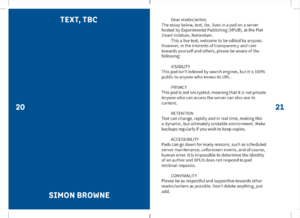 text, tbc is an essay commissioned by Onomatopee for a reader, published as part of the Meeting Grounds public program. In this essay I describe my interest in text's overlapping dimensions: the editorial, technical and social. The text is performed through the use of Etherpad: as a writing environment to create the text, a software to reflect on, and a live editable document which anyone may edit, if they know the URL.


The essay below, text, tbc, lives in a pad on a server hosted by Experimental Publishing (XPUB), at the Piet Zwart Institute, Rotterdam.
This a live text, welcome to be edited by anyone. However, in the interests of transparency and care towards yourself and others, please be aware of the following:


VISIBILITY:
This pad isn't indexed by search engines, but it is 100% public to anyone who knows its URL.

RETENTION:
Text can change, rapidly and in real time, making this a dynamic, but ultimately unstable environment. Make backups regularly if you wish to keep copies.

ACCESSIBILITY:
Pads can go down for many reasons, such as scheduled server maintenance, unforeseen events, and of course, human error. It is impossible to determine the identity of an author and XPUB does not respond to pad retrieval requests.

CONVIVIALITY:
Please be as respectful and supportive towards other reader/writers as possible. Don't delete anything, just add.

Text flies in an endless stream before your eyes. News reports, longform articles, facts and figures, documents and messages sent at all hours of the day and night; it is always daylight somewhere in the world and there is always something new to report. You see text, but you don't have the time to carefully read and absorb it. You have never read or written so much. Your phone buzzes with the input and output of messages and notifications. You are exhausted by the letters, numbers, punctuation, and spaces that make up what is usually called “text”.

But the overwhelming presence of text is not felt just in the material form of its characters, or the spaces between them. It resides in text's overlapping dimensions and resulting viewpoints and how these influence practices of reading and writing.

The editorial dimension; text is a sequence. A line of characters and spaces, the particular order that the writer sets these in. Text becomes an object, a carrier of thoughts and feelings, something that can be sent back and forth between participants in a conversation.

The technical dimension; text is a process. Messages and files that we share are text-based. A computer runs on software, programmed in encoded text, often the same characters that flicker before your eyes. Texts can be assembled on-the-fly as a machine reads scripts and writes output in response to input.

The social dimension; text is a framework. The English word "text" has roots in the Proto-Indo-European word teks-, meaning “to weave, to fabricate, to make; make wicker or wattle framework”. A piece of writing is a text, and so is a conversation; texts represent the exchange of shared concepts (words, signs, representations) woven into a fabric of communication. There is also an exchange between written and spoken texts; oral discussions which prompt writing, and writing which sparks conversations. Texts elicit further texts.

I’m typing this now using a self-hosted, open-source, browser-based, realtime, collaborative text-editing software called Etherpad. Etherpad is many things, as you can probably tell by the string of adjectives in my previous sentence. The pad, as it is colloquially (somewhat affectionately) known by many users, has its own peculiar twist on online public space and subsequently, the public it makes. An environment; a combination of particular conditions set by hardware and software that determine how a user operates within it. The pad is an unstable, dynamic environment open to participation, often without notions of consistency in formatting, or singularity in authorship. For a start, anyone who knows the URL can edit what is written here. This text could easily become an unruly wall built without convention, just sitting there in the browser. And though you, dear readers, may also become writers, you will barely recognise each other as authors.

Some of you will choose a username, some will remain unnamed by default. I often call myself karen eliot (all lowercase), a shared pen name favoured by the Neoists, an art movement famous for creating multiple definitions of itself. karen eliot is everyone and no-one, and on the pad, so am I. In collaborative writing sessions, what I type becomes intermingled with the writings of others until I can hardly say it is mine any more; copy-pasted, deleted, overwritten, rephrased, paraphrased and line-edited to the nth degree. As authorship colours and names change at whim, it's almost impossible for writers to know who is who unless you go back through the version history and/or sleuth the chat section for clues. But it's hardly important when the purpose is to write together.

Sometimes I use it to write by myself, typing into the pad as the server records a mind-boggling database of every key I press, every action I undo. I slide back in time through this text (the one you're reading) to see revisions in the version history. So far the only author there is myself, although all anyone needs to do is type (even a space), and they will automatically join karen eliot as a listed co-author.  Add multiple users at multiple keyboards, all free to edit autonomously, and the writing starts to become definitively less a work of singular authorship, and more a woven multiplicity of perspectives.

Often the pad serves as a note-taking accompaniment to a spoken conversation, transcribing each other's words, turning our speech into text. Fingers typing rapidly, trying to keep up with the pace of dictation will make mistakes. In response, a distinct protocol develops in support of diverse ways of reading and writing. Spell-checking is often unnecessary; writers may mis-type, but ultimately, their/they're/there spelling isn't a concern as long as it doesn't get in the way of communication. I'm reminded of Samizdat publishers, who eschewed the title of "author" in favour of “typist” or “editor” due to the unwanted attention and risk it would bring to themselves and their dissident republications of censored books. Editing, typing, reproducing texts by hand; all of this encourages a slippery form of authorship through human error and idiosyncratic preferences for a new phrase, sense-for-sense translation or structure. When no writer is the discernible author, everyone becomes a text editor.

The pad exemplifies the editorial, technical and social dimensions of text. New editors respond with reactions that range from eager enthusiasm to shy suspicion. For some, the pad seems too public, too immediate, too dynamic. What we type, delete, mis-type or mis-spell is there for all to see as we do it. But for the enthusiasts, individually-coloured sentences quickly proliferate into multicoloured streams of collaborative writing. For all its dynamic energy and realtime nature, the pad generates an aura of calm. It's not a feed which must be scrolled, there are no read receipts and no-one can be left on seen. Indeed, nothing can be sent or unsent, nor for that matter, unseen. There are no notifications, it doesn't buzz in the middle of the night. When I come back to it a day or so later, a new text has evolved. There are no other readers or writers there now, only myself, karen eliot. I pause, taking the time to read and absorb it.

With special thanks to Steve Rushton and Michael Murtaugh.