I want to make a website that contains a collection of mini games/interactive stories about how propaganda, suppression and political turmoil affect our online experience on a personal level. These games will not be the part of one single overarching story, but they will be thematically linked snippets. Through this collection, the viewers can analyze their own experiences and observe what parts they relate to and what parts they haven't considered before. These can be considered short simulations of real life situations that can happen to real people. Such as witnessing online censorship and trying to find ways to preserve content before it's deleted, or becoming target of harassment for stating an opinion. Or it can be a social media influencer trying to create relevant and humorous content that will be shared by a lot of people but also making sure it conveys a meaningful message. Or a mini game about someone trying to explain to their older relatives that not everything they see on Facebook is real.


My audience is people between ages of 18 and 35, who use internet at least semi regularly and interact with political content, either out of interest or because they happen to be in a situation where they cannot avoid it.

Why Do I Want to Make This? 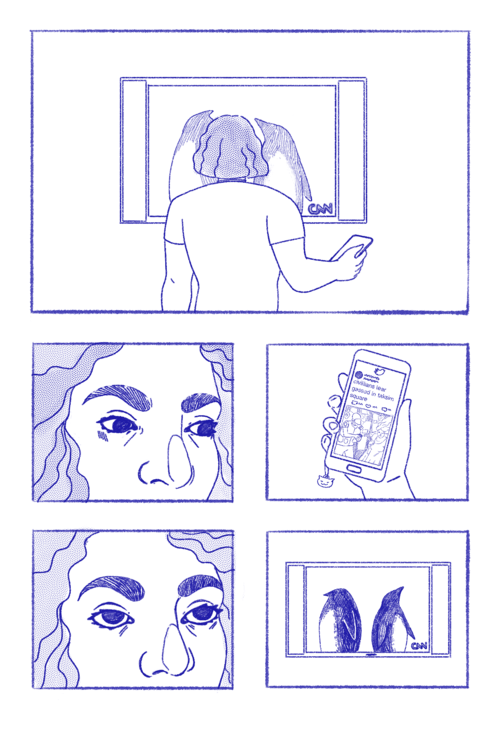 In the summer of 2013, I witnessed a local protest in Istanbul grow into a nationwide movement of unprecedented scale. While mainstream news outlets tried to stifle it by not publicizing the protests, this anti authoritarian movement grew through social networks. The Gezi Park protests changed the way I used the internet, from a source of entertainment to a tool to educate myself and find communities. Listening to other people who took part in the protests, and reading what they wrote online, helped me recognize the biases of my education, on both issues related to Turkey and to the rest of the world. These experiences stayed with me as an interest in media analysis and online culture. Other than graphic design and visual arts, this has been something I wanted to explore in my academic practice. While raising awareness to certain situations is a concern of the project, I aim to promote empathy and solidarity and highlight similarities of our experiences. A sentiment I come across often is that there is a clear divide between repression and propaganda tactics used by authoritarian regimes in usually non-western countries and the attitude towards freedom of speech in western countries; and that the chances of the latter adopting the tactics of the former are very low. But when the issue is discussed further we very often realize that similar tactics are used in different places, and we have more in common experiences than we think. In Media Virus, Douglas Rushkoff talks about various methods of media manipulation, and while the examples given are all from the US, lots of people who live outside the US can also recognize some of these methods in the media they consume. And I think there is an important conversation that we can have about this, one that can lead to understanding and mutual support.

Relation to My Practice

My bachelor graduation project was a VR experience titled Virtual Gallery. I used Unreal Engine 4 to make it. In essence it was a virtual environment where the viewer had control over the environmental aspects surrounding the artworks they are observing, such as light, point of view, and location. The purpose of the project was not to create an alternative to museums but to start a conversation about the relationship of the viewer and the artwork, and what happens to that relationship when the decisions made by the museum on how to view the artwork are removed.
Before I started my masters study, I worked on a project titled Sanctuary, which was a statement about the lack of green spaces in Istanbul, disguised as a product. This was a houseplant care starter kit, meant to help people who didn't have a lot of time to spend time in parks or other green spaces. The kit included tools and a guide to make plant care at home as easy and low effort as possible and presented house plants as an alternative to spending time in nature. I think the field of design is underutilized as a tool of conversation and awareness, and is more often seen as a way to find definitive solutions to structural problems that cannot actually be solved by products. I'm motivated to make design work that communicate ideas, which is how I see this project as well.


All three of the special issues I worked on in the first year of XPUB contributed to decisions I made about my project in different ways. While I was working for Special Issue 10, I did research on interfaces and how they can affect decision making, especially on websites. My work during Special Issue 11 really motivated me to study online politics. Seeing the similar oppressive tactics used by authoritarian regimes in very different parts of the world made me realize that If we had the chance to recognize these similarities and acknowledge each others struggles, we can learn a lot from each other. And as someone who had to deal with repression and censorship growing up, the way we used online tools to circumvent censorship was really empowering and it made me aware of the ways I can use my own practice in ways that can help me and those around me in a tangible way. Special Issue 11 involved an archive of political material, and I felt like it would be useful to have a section where statistics of this archive were visualized to make information more accessible. While working on Special Issue 12, I had the chance to produce a number of podcasts and the one I enjoyed working on the most was a podcast titled Souvenir (File:Damla-souvenir.mp3), which was about the controversy surrounding the Nefertiti bust on display in Berlin. Bringing my research together into a (real) story about colonization, European museums and access to information and artworks was a different way of working for me, and I appreciated this as an opportunity to work with writing.

Relation to Other Works

Zeynep Tufekci’s study on the role of social media on activism and protests such as Arab Spring, Gezi protests and later Hong Kong protests was one of the things that sparked my interest on social media as a tool of communication and connection, especially since I had personal experience with one of these events. I was also inspired by a number of online resources that were created as a reaction towards censorship and manipulation. Teyit.org is a fact checking platform that has managed to reach a considerable amount of internet users in Turkey, EngelliWeb is a Twitter account that tracks online content that the Turkish government blocks access to. As someone who grew up spending a lot of time online, the work these platforms do made me want to utilize my experience.

I have been doing research on politics and media with a focus on online media and drafting ideas on talking about findings of my research, as well as my personal experiences and experiences of people around me, in an interactive medium. I think interaction is effective in building empaty, text based games like Depression Quest and Grayscale tackle heavy subjects like mental illness and sexual harassment and make use of the medium in creative ways to pull the player into the fiction. Depression Quest severely restricts the choices available to the player but still makes the unavailable choices visible, putting the player in the place of someone whose daily functions are impaired by their mental illness. Grayscale mimics the interface of corporate email account, and gives the player the story of workplace sexual harassment. Both games also utilize frustration caused by making hard decisions as a way of replicating emotions people feel when they are really in these situations. It's important that the end result feels organic and relatable, i hope to achieve this through writing, experimentation and thorough research. This research will be an important part of my thesis as well, I aim for the thesis to be a deep dive into the subjects i explore in my project in a more accessible and engaging way. Throughout this process, I will be making storyboards and prototypes and editing the material I accumulate according to feedback I receive from testing.


I also plan to seek out game developers who feature real world topics in their games and learn from them. Having a clear foundation is important for me to understand the tools I use during the development stage, and so while I don't want to delay the prototyping stage of my project, I think the time I will dedicate to concept development is valuable.


In terms of writing for games, I would appreciate feedback from Marloes. For now, I don’t know what are the most suitable tools to make this project, In essence I will be making a browser game, so I think I would need help from Michael with Javascript and its libraries dedicated to browser based game development.

catching up on reading material necessary for the thesis

Fine tuning the game concepts i have so far, after the end of February I will be focusing on what I have instead of coming up with new ideas in terms of making games Bringing the games together into a cohesive experience, experimentation on structure and narrative of the website.

At this point I will be handling the project as a whole website, instead of looking at individual mini games. Testing, adjustments, design work will all be done in a holistic way If necessary, adding more content like about page and et cetera.