The World That We're In 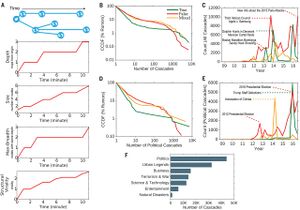 while the global society is being shaken up by one crisis after another, you managed to amass a considerable amount of influence in the turbulent online landscape. your position has many perks, but you need to be vigilant to keep enjoying them.


internet is a living organism, and it has a very short attention span. and for the most part it is uninterested in boring, sensible, dry facts.

most effective way to keep the attention on you is outrage and scandal, but be careful, your tactics can backfire and the angry mobs turn against you.


whether it's material wealth or social capital, and whether you are taking action for a higher cause or you are in it for yourself, you need to use all your resources to make your opponents disappear into insignificance, before they make you disappear. will you pick a hostile approach? or will you take the appearance of an ally? no matter what your strategy is, know this: you can trust no one.

rising star of Wall Street, the young and successful businessman Elijah Kendrick became the CEO of Cassandra after his fathers departure from the company. 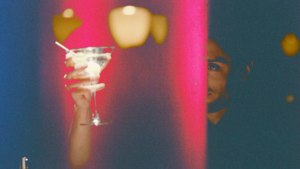 Cassandra started out as a local news network in the 90s, focusing on fringe conspiracies. Inspired by the Ancient Greek oracle, the channel insisted that even though their warnings are ignored by many, they will eventually be proven right. At the beginning of the 21st century, Cassandra went through a drastic restructuring effort and became an online bookstore. And after that, it quickly grew into one of the biggest companies in the world. It branched into numerous industries, from online shopping to tourism and media. Today Cassandra owns multiple online news outlets and a streaming platform. additionally, It is the biggest provider of various web services to majority of the tech industry.


with all these connections, its easy for Kendrick to influence the flow of online culture. He is the richest man in the world and he gets richer with every passing minute, and although he doesn’t publicize his political views, he can effortlessly suppress anyone who stands between him and exponential growth of his father's legacy. 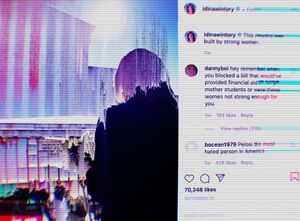 idina wintory comes from a long dynasty of interest representers. the lobbying firm started by her parents was credited with influencing around 60% of the public laws passed by the US Congress in 1985. Idina has been attending political fundraisers since she was a teenager and is praised by many for ensuring the enactment of Democracy In Agriculture Act in 2016. Though she is resented by many more, since the act gutted financial support for small farmers, increased taxes on purchasing agricultural equipment (though larger farms were exempt from this tax increase) and stripped their rights to produce their own seeds. 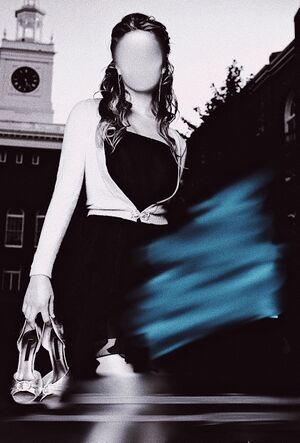 idina in a fashion shoot from the 80s

idina is very image conscious. she works with a team of public relation experts and social media analysts. she effectively capitalized on the rise of liberal feminism in the recent years and created the online image of a wholesome, fun loving girlboss, but in private company she will admit she doesn't really care much about feminism. while she is vigilant about staying away from controversy, if the need arises, she certainly has the necessary connections in a number of government agencies to shut down any slander for good.

while many claim to know how to influence public opinion on the internet, no one demonstrates their skills better than XEN. the identity of this figure is completely unknown, the grammatical errors on their posts suggest that English isn't their first language, but this could be a diversion. Their posts originated on anonymous forums around 2014. the earlier posts were controversial allegations about internet celebrities, and while almost none of these allegations had any basis, they garnered plenty of attention. XEN effectively ended the career of a beauty guru in 2015 with a forum post accusing her of conspiring with her husband to kill her in laws (who were alive at the time, but when the accusation shone a spotlight on them it was revealed that they were involved in money laundering).

In later years, XEN pivoted to politics and hatred towards them has been a bipartisan issue ever since. They don't target any specific group or political ideology, in fact, their targets are seemingly selected at random. They combine baseless, outrageous accusations with factual information, which blurs the line between what is reliable and what is not and leads more people to believing anything that they post. XEN is truly a wildcard, a mysterious figure with incomprehensible morals who constantly changes sides. They seem to be a cynical figure who hates everybody regardless of their politics, but occasionally they might be in the mood to play along and post something that benefits you.

alicia ahmed has multiple exposés of corrupt politicians under her belt. she has exposed multiple human rights abuses committed by Frontex in 2012. the documents she uploaded to Wikileaks also exposed large scale embezzlement related to EU-Turkey refugee deal and a number of coverups of deaths due to unsafe circumstances in refugee camps. Her actions earned her a considerable amount of infamy for her both in Europe and in Turkey, so much that the Turkish government asked her to be extradited to Turkey to be tried for insulting national values, even though she isn’t a Turkish national herself.


even with all the vitriol thrown at her, she believes that her work is far from done. With the rise of social media and internet being more and more accessible, there are countless more scandals to publicize and combat authoritarian media manipulation. She knows that she holds the power to end careers of CEOs, celebrities, even congresspeople and she is aware of the danger this puts her in. Alicia needs to be at the right place at the right time to stay alive and continue her work of exposing ugly truths hidden under shiny, expensive PR campaigns.

Alex "Debunking" Climate Change. A quick skim through his sources reveal that they're either unreliable or twisted to fit his narrative.

With 15 million followers on YouTube, Twitter and Instagram combined, Alex Peterson isn’t currently the biggest social media influencer, but his follower base is certainly among the most active. His videos and social media posts get more engagement than celebrities much more well known than him, thanks to the nature of his content.
Alex learnt that reactionary content thrives on internet and has been capitalizing on this since 2013, when he first started a YouTube channel. His earlier content were reaction videos where he would watch film and video game trailers and give real time commentary. Although he is based in London, his content is very popular in the United States, specifically among boys and young men between the ages of 15 to 21. In his earlier videos he would talk about the perils of feminism and social justice warriors, and how nerd culture is under attack from "normies". He harshly criticized games and films that featured women, people of color and LGBT people in leading roles, regularly asking his fans to boycott these IPs. Although him and his audience hasn’t managed to convince publishers to remove content that they found offensive until now, they certainly affected perception around many projects.
During the US presidential race of 2016, Alex pivoted to political commentary, but the nature of his content stayed the same. He uses aggressive, reactionary language to spark outrage but lately his targets are progressive public figures. Each vitriolic post he makes not only deplatforms his followers but earns him more and more media attention.

Where Do We Go From Here?

You have been introduced to the players in this game of intrigue. However, they are not your opponents. The players struggle for power and influence among each other, but you, you are their puppet master. Not the only one, mind you, there are others. And they are your real opponents. You and your opponents are the sponsors of Alex, the policymakers who look the other way when Cassandra violates antitrust laws. The companies that hire Idina to represent their interests. Or maybe, you're simply the public. After all, anyone who learns what makes all this tick can influence public opinion. Is that not what XEN did? Is that not what pushed Alicia into taking action?
Let me tell you how all this works...

Material wealth? lmao. We are in the 21st century. Posessions come and go, the real signifier of power today is your ability to influence public discourse. The currency for this game is followers. Each turn, you gain 2 million, and you can attempt certain actions when you amass a large amount of followers. But public figures who feed on outrage like Alex might launch defamation campaigns against the players you're allied with, and unless you have someone like him or XEN on your side, before you know it, some of their followers have migrated to his social media accounts. Or maybe something you shared angered that rich kid CEO, or whoever pulls his strings, and he ordered his journalists to write a hit piece against your allies. So normally you get 2 million followers each round, if there is no interference. If you have 3 million followers, and someone like Alicia on your side, a whistleblower who has a huge amount of dirt on your opponents, you can expose a player and obliterate their online presence. Unless the person you are trying to expose is allied with a Lobbyist. Like Idina. She knows how to get out of any scandal. But, If you have more followers, like around 7 million, you can get rid of allies of your opponents without any help.