[A title please. It's very good that you chose to write this with reenactment as the lens through which to examine the films, and highlight how re-enactment can be both a conduit for desire and ideology. Make Bibliography-- check citations--title and credit image. Also, look at the idea that ideology is scripted: See: http://pzwart3.wdka.hro.nl/wiki/User:Lucia_Dossin/Reading_Writing_Research_Methodologies/Assignment_6/Draft]

‘You don’t always have explicit rules, you always, in order to become part of a community you need some implicit, unspoken rules that are never publically recognized but are always absolutely crucial at the identification of a group’ [give citation]

In this paper I will present how re-enactment and staging can be applied to reveal implicit social codes and dominant ideologies.

In The Perverts Guide To Ideology Slavoy Zizek adapts a Lacanian pschyo-analytical approach to filmic texts to highlight how ideologies are formed and upheld [<<is this the right word? ] in society. In a specific example he looks at Stanley Kubrick’s Full Metal Jacket (1987) and how the obscene excess of military culture is crucial in maintaining a dominant ideology and that without these small obscenities the military system would not function. Zizek further states that Abu Ghraib torturing of Iraqi soldiers was not just humiliation, but also the public staging of the obscene underside of the American military culture. These perfomative actions demonstrate the obscene implicit culture of military society; they are a necessity that withhold the ideological apparatus. Taking this idea as a departure point I will analyse the use of re-enactment as a method to perform the implicit social codes of different communities in both the Act of Killing (2012) and Episode three: Enjoy Poverty (2009)

Re-enactment is used both in The Act Of Killing (2012) and Enjoy Poverty (2009) to reveal ‘implicit rules’ that Zizek regards as fundamental in the collective formation of a dominant ideology. How do re-enactment, performance and staging expose subliminal and previously hidden rules that shape the ideology of a community or social group. In this essay I will demonstrate how Joshua Oppenheimer uses re-enactment to articulate some of the obscene implicit social practises (often in military groups) to depict his characters. I will then look at a sequence in Renzo Marten’s ‘Enjoy Poverty’ where through a conscious staging and re-enactment the systematic structures of oppressive western capitalism are made visible. With both examples I will assess the use of re-enactment to highlight intentions of the artist.

Re-enactment has been adapted by artists working in social fields as an experiential medium to revive subjects to a wider audience. Artist use re-enactment for different means, a therapeutic model can be identified that allows for a resolve on the subject through restaging. An example of this would be Ant Farm’s staging of Zapruda’s single shot of the assassination of JFK where Chip Lord (dressed as Jacqueline Kennedy) declares ‘This is the end for me’. Re-enactment can bring closure to a subject or in the case of Jeremy Dellar’s The Battle of Orgreave (2001) open up a subject for re-examination. This site-specific public staging of the miners strike of 1984 involved actual ex-miners, locals and re-enactment enthusiasts that deliberately creates a strained relation between the participants, re-opening the social tensions of 1984. What’s important is the artist’s use of re-enactment to expose social tensions whilst retaining an authorship and level of control over their subject. This directed re-enactment is visible in both The Act of Killing and Enjoy Poverty! 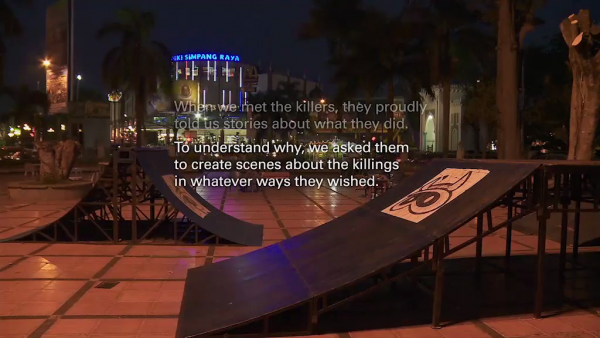 Director Joshua Oppenheimer presents the viewer with three text slides to inform the viewer of the context and reasoning behind the film we learn that he invites these men to re-enact the killings – “To understand why, we asked them to create scenes about the killings in whatever way they wished.” The film openly announces to the viewer that the following images are no restriction re-enactments of these killers’ experiences, facilitating and enabling these men to perform torturous acts. ‘To understand why’ is not the priority in this film and like the Abu Ghraib scandal Joshua Oppenheimer is deliberately restaging obscene encounters that reveal the implicit social codes of a military group. It is important to recognise how a limitless invitation of re-enactment can be a method to reveal inner fantasises of the subject and therefore the intentions of the artist. [interesting to unpack this - abu ghraib images were staged for consumption by whom? They have been proved to be 'systematic' torture by many independent reports. who is anwar performing for and who is Linsy English (sic) performing for? Very promising link here, which could be unpacked]

The film continues to repeat this re-enactment method of the militia publically restaging their killings within the framework of acting as celebrities and making a Hollywood movie. Frequently the obscenity of their acts within the relaxed social environment of the re-enactment process provides the cinematic tension. “I’m laughing – I did it wrong didn’t I?” reflects Anwar as he watches himself strangling someone and worries about staining his white trousers. The relaxed nature of the way these re-enactments are carried out heightens the horrors of the original killings and presents these characters as mercenary perpetrators that show little remorse. When referring to the intentions of re-enactment in social practice, filmmaker Joshua Oppenheimer is revealing tensions rather than making any attempt to heal them in The Act of Killing. 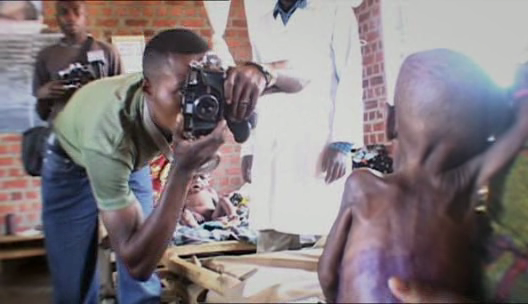 Enjoy Poverty “You are all actors”

Renzo Marten’s project ‘Enjoy Poverty’ frames the oppression of western aid and NGOs that profit from African poverty. He attempts to teach Congonese men to ‘own their poverty’ by taking their own images to sell to western aid organisations. Martin’s tells them ‘you are all actors’ before giving them cameras to begin capturing these valuable images that perform poverty. This sequence is important in discussing re-enactment methods because it simultaneously reveals tensions between a western economy and African people whilst also seemingly attempting to resolve some of those tensions.

When teaching Congonese men how to take pictures of the poor people in their community Renzo Martins is explicit in highlighting western economic value in poverty. Martins gives cameras to the men and assists them in staging impoverished images that can be sold to western media companies. This staging is important in realising the alienation of the western ‘other’ and the local men who cannot identify with western gaze and what produces a valuable image to western companies. Martens uses his western gaze to actively train these local men to see the poverty around them and frame it for a western market. The language Martins uses to invert the economic exploitation of poverty is about staging, acting and performing poverty for their own economic wealth.

Martins films local Cogonese men taking pictures of starving children, and as they discuss how the images can be composed to make more money, the hidden methods of an industry and its relation to a community are re-enacted by members of the community. Martens takes the new local photographers to a distributer and is told by a representative of Doctors Without Borders that ‘taking an image is more than just pushing a button’. To be specific what’s missing in the images is the western gaze that frames their poverty to the aid companies. The re-enactment of these images by locals does not convince the representative – he sees them as simulations and artificial reproductions. Even with Martin’s help the staging of these scenes doesn’t convince their target audience (the western market) and therefore this re-staging process is unsuccessful in challenging the current state of play. ‘The piece is the third in a series of films that, by enacting their own parameters, try to make visible their own complicity in a world obscured by depictions of it.’

However let us abstract the analysis with a wider lens and view this process within the production of a contemporary art piece. The film was initially screened at the international Documentary Film Festival Amsterdam and has go on to be shown at international art fairs and art Biennales. On his website Martens acknowledges that ‘the whole project seems bound to fail’ and that the end result exists within the models of representation that it is reflecting on. Once their photos are rejected Martens brutally admits to the photographers that he ‘thinks this will fail’, they turn and walk away dejected after embarking on this plan. It is here that Marten’s situates himself with a cynical distance and a bound to fail attitude that makes his intentions clear – that through this re-enactment process he is able to reveal the complex and oppressive market of African imagery, but not solve them. The speed in which he gives up on the project indicates his intentions as artist to reveal through re-enactment a social oppression that cannot be solved by an art documentary.

Both films apply public re-enactment of events or procedures to reveal a relational tension between the subjects and the filmmaker. In the Act of Killing Joshua Oppenheimer extensively covers an organised public re-enactment of killings committed by war criminals. The tension relies on an ambiguous relationship between himself and the characters that is created through this staged framework of the film being a making of an unspecified re-enactment. Renzo Martens uses re-enactment methods to reveal an oppressive social structure and although it initially appears that the staging of these images made by Africans is an attempt to resolve the tension, it serves only to reveal and highlight the his concerns. Both Filmmakers direct a process of re-enactment to reveal social tensions that form ideologies for the viewer to critique, they server as a catalyst for a discussion rather than a solution or resolution.[Maybe this text could be given a smoother landing.]

an arena in which to re-enact- Sven Lutticken

history will repeat itself -- Inke Arns

The Culture of the copy - Hillel Schwarts