An Installation in which real time online content is streamed and printed according to emotional categorization. Modified receipt printers continuously print out tweets containing the words ‘happy’, ‘sad’ and ‘love’. Tweets are sold by the performing stock brokers to the audience as shares in the emotion stock market. The audience then trade their tweets according to the share index of the emotion they have invested in. When the traders stop trading the installtion automatically continues piling up unsold tweets. A website accompanies the project displaying the share index and value of each emotion that is being traded in the emotional stock market.

Tech: 3 x macbook pro, 3 x g4 systems, 3x cpu screens, 3x plinths for them to be displayed on. Behind each plinth is an arduino and a circuit connecting the laptops to the receipt printers for the tweets to be printed through. Each plinth (1.2m high) is separated by 0.5 meters to allow for the performer to stand next to it. During the performance a stockbrocker stands beside his staton selling tweets to the incoming audience. Each one is competing to sell shares in their emotion for the lowest price. The audience member can read the printed tweets and select the ones they would like to buy. After purchasing the audience member can sell their shares back to the stockbroker and make a profit if the index value has increased. Emotional Stock Market was made to highlight the value in social data and its relation to markets. The fantasy stock market was an explicit presentation of the economic value in digital communication. I was responding to political discussions of replacing GDP with emotional wellbeing and wanted to present a system for data analysis that could monitor global wellbeing. At the time (2011) the implications of our data having financial worth for commercial companies was ambiguous and lacked clarity. Now however the data exchange for online free services is in an explicit model within the digital economy. Advertisers, companies and now Governments pay to access this data as our emotional state can influences our consumer trends.

A website that displays the google map interface with different landmark icons that reveal videos of people remembering where they grew up against a backdrop of the environment on google streetview. Each landmark icon when clicked reveals a video recording of somebody talking to camera remembering where they grew with a chroma keyed streetview landscape of their street and local area in the background of the video. The streetview chromo key explores the local area behind the person in the video while they recall their favorite aspects of their neighbourhood and where they grew up. The collection of videos is navigated through the standard google maps interface within the website. The people talk about what they can see, how the place has changed (or how different it looks) and what they can remember.

Making the videos videos are created by setting up the correct lighting and green screen backdrop for chromo key to work so that the google maps streetview can be layered onto the background of the video. Someone comes in and tells me the postcode or address of where the grew up. on a computer i search this location in google maps and make a screen recording using ishowu HD. Once i have recorded this video for 30 seconds i then insert the video file into a chroma keylive to test it as a backdrop on the video. Their is a computer monitor mirroring my desktop so that the participant can see themselves within the video preview. I start recording audio, go full screen on the chroma key preview, click to sync the video and sound and then ask the participant to begin. The streetview recording plays in the background while the participant remembers the area.

Creating the Website Create a map in google, turn all your participant recordings into a spreadsheet with postcode and video file link to youtube url. turn this spreadsheet into a table and then by using "google fusion" the table can be visualised onto google maps. you may also need to add a colour key for the landmark icons. this you do by entering the shortcode small_purple and applying it to the attributes of one of the columns or rows

YourHomepage is about the relationship between the user and the google maps service. By presenting personal memories in front of the ubiquitous digital interface the emotional expression and standardised navigation creates a conflict. im interested in relationship between the memory, the place and the digital representation. The piece is a an online work that returns to the digital form , creating layers of personal memories onto the google maps landscape. It is interesting to archive such personal histories onto a public platform, that sits within a discourse of the internet medium.

The Last Day of T.V.

A series of 5 boxes that contain 5 videos that together make up a bootleg recording of the last day of analogue broadcasting in London, UK. Each box has a different UK national channel logo on the cover and each video is labeled with the date and time information of each recording. The boxes are hand made with a gray tone with white lettering and are a single edition. Each video case contains an image of a television tower overlayed with 5 circles that represent an analogue broadcast signal. The logo is a rebranding to package the last day of TV.

5 Televisions with RF antennas are placed on individuals plinths with a vhs recorder below them. The recorders are constantly recording the channel that the Television is broadcasting. Each Television is showing a different Channel. Once the recordings are made card is screen printed with the logo and title information of each video. These were constructed using craft glue so they can be archived.

The Last Day of TV was made in response to the end of analogue broadcasting in Uk in April 2012. Primarily we wanted to raise awareness that the broadcasting medium that had served us for over 70 years was quietly ceasing transmission. The last moment was important to archive as the last frame of a historical broadcasting medium, and i wanted to record and archive this final frame onto vhs recording. This felt important because the vhs format and its relation to recording copyrighted television was also coming to an end. In the information age where all digital signals leave a trail capturing the last moment of analogue needed to be archived too.

History of society, power (discipline) and Control. pre 17th century we used to sacrifice our bodies for punishment (off with his head) then in the reformation we began using institutions to reprimand crimes committed. The word penitentiary derives from penance which means the voluntary self - punishment inflicted as an outward expression of repentance for having done wrong. We began to reform through prisons, schools, hospitals, military, all institutions were centralised establishments for humans to evoke a code of conduct, a discipline that helped create a better society. 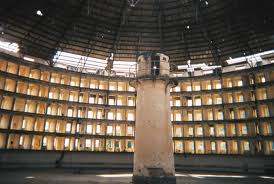 Panopticon The panoptican example works because when each subject thinks they are being watched they withhold the moral and social discipline affected to them through the institution. Even when you turn the lights off, they might still be someone up the tower.

The key thing is that we internally the surveillance system, this is the basis for participatory capitalism and the society of control.

Efficiency is gained through a codification of space and time, space and time are the means to which discipline can be regulated. for example - i have to be at work at this time, or i have to be at court at this time. The reason i talk about efficiency because this shifted the change in thought from sacrificing ones body if docile (pre 17th century) we began to discipline ourselves through time and space codes. This self regulation is key to understanding Foucalt's ideas of self discipline relating to the (more contemporary) society of control. The subject becomes a product of distributed disciplinary mechanisms that collectively can induce a populist mode of moral judgement. Observation + Examination = normalised Judgement. examples Muybridge - early photographs observing human form are often the body training attempting to achieve physical standards. Early 1870s typology of criminals are early examples of attempts to examine, observe and normalise judgement.

Key things - Panoptican achieving an internalized surveillance that leads to a self regulatory person, responding from time and space codes to become more efficient and in effect form a normalised moral judgement. (of what is the norm)

Now the time and space codes for forming this interalized self management spill into the digital. Everytime we enter a password for access, this is a gateway to enter a coded space with a regulated disciplinary schema. These environments are mechanisms to distribute power and in their very structure present an operational discipline. So we are encountering more spaces that are systematically built to inherently create a self disciplinary experience.

"Faocoult and Databases" (Mark Poster) "In the post-fordist economy , as service jobs became more important, it became imperative to present oneself not so much as an interchangeable supplier of labour power (which is the commodity most people sell) but to perform oneself as a unique commodity person. In a spectacular culture, everybody is a performer forever re-presenting him/her self in an attractive way" Lutticken

The Neo liberal performing subject = the reality TV star. Now the labour - power exchange has changed we perform ourselves as a commodity as this data has become valuable like labour. To return to Foucalt we are self disciplining ourselves for efficiency and to contribute to the economy. We update our status, we blog, we share, we comment all of this 'prosumer' data are bytes that distribute the self discipline that we goven ourselves with.

When we used to trade labour for capital we were striving for social efficiency in an act of self discipline. Now that data has economic value and can define the self we have becoming subjects that perform in the database.

The Database is systematically regulatory, every free service we use is built to so the interface works in programmed way, requiring a discipline from the user. The more interaction with this software the more self discipline codes are distributed through our internalized self.

"Performing in the database" Some notes from "We live in Public' by Josh Harris the film documents artist Josh Harris work with web, media and people in the late 1990s. "Everything is free, except the tapes that we record you on" "everyone is so exposed its hard to get to know someone" "I feel divorced from myself" the performance of the subject becoming so grand to actually detach oneself/

The self governance that comes from society of control and participated surveillance is ideal - you don't need an authoritarian leader. Power is inherently distributed through the infrastructure that is built to impose self discipline codes that we adhere to comply with them. The NSA / Prism scandal has happened without their being any apparent 'Bad guy' in the free democratic western world, the society of control automates power through distributed mechanisms. see evil media for more of this.