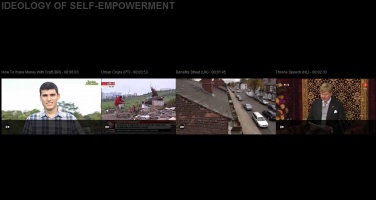 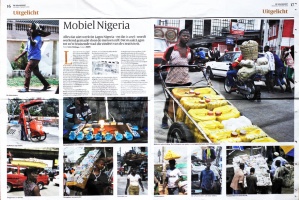 CRAFTS AND THE IDEOLOGY OF SELF-EMPOWERMENT

Rooted in personal skill and creative capacity, craft is deeply related to the notion of manual pleasure and authenticity. It is therefore ideologically associated with the fight for individual identity and freedom. Paradoxically though, the nature of craftsmanship is historically and in its essence collective. Craftsmanship gathers different forms of expertise at the service of a group, based on need, functionality and excellency of standards. Which meaning does any mention of crafts have nowadays without this socioeconomic purpose? What is the meaning of crafts in a global market and individualist logic?

This piece approaches do-it-yourself ideology as a governmental tool to control public unrest. The relation between this ideology and cycles of political and financial crisis has been evident throughout history (Arts & Crafts, Situationist International, Fluxus, punk movement), but today we find it embedded in mainstream culture. The idea of individual choice, ultimate freedom and self-sufficiency now serves a shift of responsibilities, away from public government to people’s own hands.

Social services are being dramatically cut down in most Western countries. A whole media apparatus introduces the ideological framework for it. We feel greatly empowered despite the increasing loss of security regarding work conditions, education, healthcare and cultural resources. It might be this sense of individual power that is greatly undermining our political criticism. What we used to consider tools of insurrection, freedom and self-expression in several radical movements since William Morris is turning into meaningless commodities.

Reality shows and documentaries on the decay of the welfare state like 'Tokkies' in the Netherlands and 'Benefits Street' in UK negatively depict the user of a social system, preparing the ground needed for political disruption and slashing of social rights. Stereotyping and blame are used to destroy empathy among individuals, rendering people apolitical and therefore vulnerable. When William Morris, in News from Nowhere, chapter XVII, explains how the Industrial Age was overcome in a new Utopia, this partly reads like a description of a welfare state:

"Therefore, though they knew that the only reasonable aim for those who would better the world was a condition of equality, in their impatience and despair they managed to convince themselves that if they could by hook or by crook get the machinery of production and the management of property so altered that the ‘lower classes’ (so the horrible word ran) might have their slavery somewhat ameliorated, they would be ready to fit into this machinery, and would use it for bettering their condition still more and still more, until at last the result would be a practical equality (they were very fond of using the word ‘practical’), because ‘the rich’ would be forced to pay so much for keeping ‘the poor’ in a tolerable condition that the condition of riches would become no longer valuable and would gradually die out. Do you follow me?” (...) “Well, since you follow me, you will see that as a theory this was not altogether unreasonable, but ‘practically,’ it turned out a failure.”

One of the videos is about urban crops in Lisbon. Urban farming is widely discussed in Portugal and it is perceived as a very positive tendency. However, most of the farmers cultivate ground they do not own and property legislation is very unlikely to change in favor of them. They will be soon expelled from the land, and nobody will hear about them anymore on TV. Yet the propaganda message went through: There are alternative ways of living in the midst of political and financial corruption.

Most businesses based on self-made products seem to have this ideological purpose. Hardly anyone manages to get something financially meaningful out of it. Taxes and market regulations increase by the day. It is a paradox, but our self-empowerment appears to grow reciprocally to our loss of capacity to strive independently.

Traces of a pure-democratic dream can be found everywhere around us though, in community construction of playgrounds, group action for green areas, neighborhood discussions on urban transformation, opinion platforms. The bottom-up principle, community interests and integrity of action are here to substitute the decaying welfare state. People are stimulated to embrace entrepreneurship, flexibility of work, schedule and income, to look after each other and prepare their own future.

Everyone is supposed to try to do what they are best at whilst adapting to market needs and finding their own personal way within it - exactly what William Morris had dreamed of. Whenever people don’t really want this, they are told that it is what they do want anyway. Eventually they will believe it.

"(...) The classical welfare state is slowly but surely evolving into a participation society. Everyone who is able will be asked to take responsibility for their own lives and immediate surroundings. When people shape their own futures, they add value not only to their own lives but to society as a whole (...)"