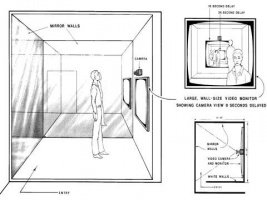 performance based in 'behaviorism'; perceiving or presenting the performance as a set of objective actions and observations, detached from subjective interpretation.

dan graham makes reference to Lacan's mirror phase and speaks about the layer of information he gets from the audience about his own presence and image.

[49] "from a behaviourist language to a projective psycologist"

[49] "contaminated by my impressions of the reactions of the audience"

the audience does not have time to memorize, because its coupling to the performer makes it a producer and not a possessor of time.

[51] "this double homeostasis (1) is the exact allegory of the politician's relation to the mass media in the advanced industrial societies. A candidate in an elections compaign does exactly what the performer does here. He describes himself and produces an image of himself in'real time', an image which cannot help but slip away from the reality of his time (...) Polls, press reviews, and instantaneous popularity ratings constitute the vast homeostatic machinery of a well-conducted electoral campaign. The politician also describes his audience. At one moment it will be the undifferentiated mass that he attempts to rally around an image, a sensibility, a program or a slogan in which it will recognize itself, at the next it will its different components, social levels or age groups, interest groups or pressure groups, which he will address selectivelly, and which he will endow by this very selection with an imaginary allegiance to a cause. here again, the media are homeostatic: they couple into a loop two images which aim to be the reflection of each other"

(1) homeostasis: property of a system in which variables are regulated so that internal conditions remain stable and relatively constant

[51] Is the political world, and with it perhaps even civil society, becoming a great sel-regulated machine that knows no other finality than those its own retroactive circuits generate, reinforce or moderate within it? A society without transcendency? That has often be said, and therefore must be true - the whole question being whether this is to be regretted or whether one should not instead look for the political where it actually is, where there is decisiveness without eschatology (2)

(2) Eschatology: part of theology concerned with what are believed to be the final events of history, or the ultimate destiny of humanity

Graham's works often consist in exposing the mecanisms of alienation or reification, and not at all in proposing an emancipatory alternative.

[53] the tour de force of this performance and of its experimental set-up, despite all its simplicity, is to allegorize the 'mediatization' of political life without the media being at all present in the performance. And it is their very absence that confers upon them, a contrario, such a powerful theoretical presence.

a screen with a camera on top. The camera records the visitors facing the screen and the mirror wall behind them. The screen displays the recording with 8 seconds delay. Every 8 seconds the recorder gets the reflection including the screen where the image from 8 seconds ago is being displayed. We get a screen inside a screen in an endless perpectival/temporal cloning. the 'historical individual'! The author points out that this performance can be seen as complementary of the audience/sequence one.

[54] It is the ideal of the bureaucracy, or rather of the admninistration: it records, and buries its recordings under other recordings creating the illusion of a tranquil historical perspective where history is no more than the reproduction of the same, creeping softly toward oblivion.

- numbers as image. 'pyramids' 1965. each line two layers: on top a number is repeated, bellow each of these repeted elements is numbered. The top line goes from 0 to 13. The 13 is on the base of the pyramid and counts 13 elements.

- tables with drugs and side-effects

- houses of america. information, tables, photography. objective display of inter-related data. the pictures are not supposed to be seen on their own, but associated within a layout including the text and diagrams. In the end the work was published by "Arts Magazine" next to the pictures of Walker Evan on row houses from the 30's. The attention on a certain milieu was brought together with Graham's photos that actually referred to an opposite position, to a 'no-man's land' (Gregor Stemmrich in "Daidalos", issue 66, 1997). Instead of showing this contrast, the association of both works dragged Graham in a sort of 'photographic tradition' on representing a place. "What Graham's article makes clear in both word and image, however, is the exact opposite: the radical loss of all relation to traditionand of any form of historical memory in a consumer culture"

- slide projector. caroucel, object as medium. 80 slides, projected every 5 seconds. the slides are of transparent and semitransparent images taken of the same box, built of glass with a mirror base, focusing the lens in different parts of it. the first four slides are made only like this, the second four are made after a second box is included in the first one. some more boxes are added to a maximum of five. In total 20 slides and made and then copied four times. The focus point of the shots are made following a certain logic and the positioning of the slides in the caroucel is also not linear, I'm not going to describe how. "the sculpture is the photographic residue, an effect of projected light" (...)

- exercises of speach. recorded voice of 30 people giving a synonym of the work 'like' (...) | performing exercies of breathing on the voice of a girl that repeats the same word fo 30 minutes. first the performer is aware of all three parties involved: himself, the girl, the audience. In the end only on himself (...)

- two cameras, one in the performers hand the other filming him from a distance, he is laying down and filming downwards getting his body in the footage. he struggles and roles, readjusting everytime to a new position with the camera. The two films are displayed simultaneously in the gallery on two distant parallel walls. Triggering awareness on gravity (...) object located in a space and an alienated body

- cinema / theater. italian gardens of the renaissance and baroque periods