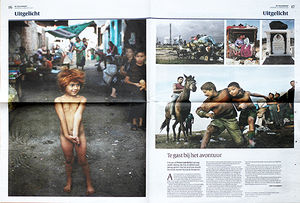 The exotic other is a research on photojournalism and social empathy. Prototypes on both new and existing material are used in order to address mechanisms of representation and deconstruct their inherent language.

Prototype_01: animation/loop - in a number of separate screens (45X60 cm), each animation document a process of deconstruction regarding a photograph. The photograph is kept in its original context, in this case a newspaper spread.

Prototype_02: installation setting - next to each screen there is a diagram and text description regarding what is going on with the collage/animation. The public has also access to an essay about the whole installation and other short form of description that might be taken away. The content at display is not an end product but a process of critical deconstruction. It is therefore important to explicitly unfold the undertaken steps; the public must be aware that this is not only an exercise of photo manipulation, but that each frame as a meaning within a broader context. The installation must reflect the concern about the hegemony of visual communication by giving equal relevance to text and spatial awareness. The close link between space, eventual seats, light sources and the material displayed should be able to define a zone within the gallery that has a particular identity. The spatial setting shall become part of the installation.

The work on photographic material attempts to reflect on the public detachment experienced upon images that are supposed to generate empathy and their failure to do so. The material collected refers to social and cultural concerns only, within the particular context of Dutch Media.

The detachment might also be related with an elementary dissonance in the process of experiencing empathy through a representation. Feeling empathy towards and individual or group implies the capacity of the observer to engage in the portrayed reality. The observer must be able to recognize on the “Other” “Himself” and imagine the feelings of threat, misery or fear upon his own skin. This is the natural phenomenon that allows one individual to be willing to act upon the reality of the other in order to erase an eminence of threat (Burke, Edmund). 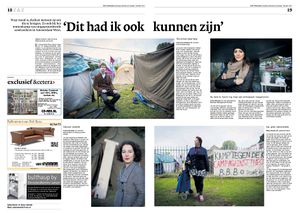 What happens when the observer is kept in a state of permanent safety and power regarding the reality that he gets to be confronted with? Could empathy actually take place in this state of unbalanced relationship of power between the one who sees and the one who gets to be seen?

The research addresses phenomenon of detachment regarding the particular sphere of local social problems in the media. The lack of empathy regarding peers in the same social, economical and political sphere might have direct consequences on the exercise of citizenship. Lack of empathy, in the sense of lack of willingness to interfere, results on a weak sense of collectivity and might trigger social conflict.

Photography plays a fundamental role in the process of shaping public opinion. It can easily deepen or reduce the phenomenon of empathy towards the reality displayed by several means, from the choice of the subject portrayed to the very emotional impact of compositional factors: perspective, light, color, background, sharpness. Photography can easily render a familiar subject “exotic” by the simple means of representing it in a certain manner. Assuming that indeed we are less likely to feel empathy towards a reality that we cannot refer to as ours, the exoticizing of images can be a tool to increase feelings of social detachment and ultimately conflict.

This matter only invests itself of importance when particular methods of representation apply permanently to similar contents or individuals, establishing cognitive links in public imagery that go beyond the reality portrayed. In this circumstance intolerance, exclusion or indifference regarding a particular group or context might be perpetuated in a subtle and silent manner. Photography, as a structure of communication, must rely on public recognition of certain signals in order to make a message go through. Inevitably the public developed a visual knowledge regarding photographical input since its very invention and this shaped a mode of perception.

Photography created its own visual language, its own set of signs charged with meaning, typologies of representation. Some of them are more obvious than others. It is clear how an ID photograph “should” look like or a family portrait, but there are also the informal typologies that developed with photojournalism: typologies of “truth” and “spontaneity”. Any theme is able to trigger public imagination regarding a possible photograph that could come along with it. We develop a visual memory that allows us to recognize a photograph as fitting a certain story or not. In the same way, photographs can induce a critical attitude towards contents that might not even be associated with it. The pre-association of a visual grammar with certain contents shapes the very way we might relate to any further stimuli.

The authority of the “storytelling” visual grammar finds its roots in the reporting of states of emergency, of realities that couldn’t be grabbed in a common photographic set. It is supposed to be a product of grabbing reality in its most authentic, improvised way. Historically it refers to contexts of social disruption, war, catastrophe, violence and decisive political moments. The urgency of capturing a moment justified the breaking of portraying rules regarding privacy, intimacy, emotional over exposure, sharpness, brightness and the very position of the subjects in the frame.

When this state of emergency is not justified or simply nonexistent, but its grammar is still applied, which are the consequences for our perception of the contents? Which are the contexts, subjects or actions that deliberately need to be rendered “emergent”?

The contents of early photojournalism and the irrevocable heritage of Magnum have an exotic aura of foreign affairs. Photojournalism was a tool to cut through the unknown and to generate awareness on hidden or distant realities. But the market detached slowly the product from its content. The visual grammar of this legacy became a product on its own; got into the realm of galleries and author editions. The depth and intensity of the engagement that the photographer had towards his subject didn’t find a marked demand. Storytelling was expected to be flexible and transformable. Photographs increasingly started to be valorized for their own visual agenda and their capacity to adapt to diverse market needs.

In one hand we have the growing authority of this genre, attested in contemporary editions and exhibitions of magnum photographs: the enormous impact of early photojournalism, the epic aura of the lonely world storyteller. In other hand, there appears to be no market for such an approach. Its visual grammar became a commodity.

Photography is historically related with the broad establishment of institutions and with the control of the individual’s identity (XIX). The disciplinary control of citizens as governmental policy grew side by side with its representation in photographical medium (Tagg, John). These visual records allowed the definition of early typologies of individuals, mainly related with criminal or medical research, representing patterns of deviation. Anthropological tables were made getting together pictures of madmen, thieves or political dissidents. Conclusions were drawn upon it and there was an attempt to predict behavior patterns based in the way certain individuals would look like. Photography allowed a visual representation of categories and its authority relied greatly in its capacity to unveil truth. Framing of reality and its immediate association with a category or typology exist from the very beginning of photography institutional use. The word “category” has Greek origin and it meant “public accusation”. The first step to have a critical attitude towards a certain subject is its very objectification. Defining types, ordering reality in typologies or categories is precisely what allows judgment to be made upon it. 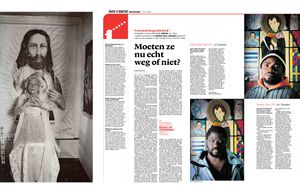 The research attempts to deconstruct hypothetical typologies in contemporary photojournalism, making use of comparative tables, critical essays, deconstruction of photographs and reportage exercises. To break patterns of visual perception may allow a broader critical attitude regarding media content and its social impact.

- Slums and the academicizing of poverty: Academic studies on informal settlements and organic urban sprawl are often completed with photographs of the local inhabitants. The contrast between the highly academic level of these studies and the vulnerability of the people portrayed is usually stunning. The exposure of their intimacy becomes integral part of the research material. This humanist form of representation helps to frame these settlements publicly onto something that can be worked on, at least that’s the purpose claimed by academics, but much too often just serves processes of gentrification. When confronted with the reality of the slums the public just tends to collect it as picturesque commodity and not act upon it at all.

- Photo-collage: The imagery produced in the context of architectural practice is carefully constructed in order to associate the design with a certain emotional charge, address tendencies or reach a particular group of people. The images combine graphics, 3D renderings and photo manipulation.

- The Ideology of Self-Empowerment: the work developed early this year within the thematic seminar “Politics of Craft” brought about a new way to look at the relationship between an individual feeling of power and its eventual consequence in lack of action. The installation presented diverse material relating the crisis of the welfare state and the Do-It-Yourself ideology.

- Photojournalism and the exposure of pain, suffering, poverty and misery as commodities (SONTAG, Susan) 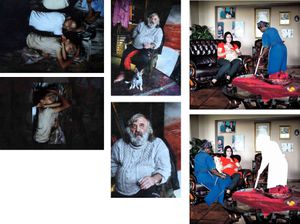 - Analysis: collection of photographs from Dutch Media, kept in the context of their publication: newspaper spread, article. Understand the visual grammar in use (composition, color, light and frame) and the narrative they stand for; deconstruct physically some photographs and display the process in a short animation;

- Text: Continuous reflection on the form of essays and textual documentation of the process carried on with the photographs (in this case graphics and schemes might be used additionally)

- Photograph: Reportage. Test forms of representation given a target group: asylum seekers / homeless in Rotterdam. Method of approach still to be defined and planned in time.

Typology: a systematic classification or study of types.

Type: a number of things or persons sharing a particular characteristic, or set of characteristics, that causes them to be regarded as a group, more or less precisely defined or designated; class; category:

Category: any general or comprehensive division; a class (…) from the Greek “katēgoría” accusation (…) to accuse, affirm, literally, speak publicly against (…)

Exotic: of foreign nature or character; not native; introduced from abroad, but not fully naturalized or acclimatized.

Semiotics: the study of signs and symbols as elements of communicative behavior; the analysis of systems of communication, as language, gestures, or clothing.

BARNEY, Matthew, “Prayer Sheet with the Wound and the Nail”, Schaulager-Hefte, 2010

BURKE, Edmund "A Philosophical Enquiry Into the Origin of Our Ideas of the Beautiful and the Sublime" Oxford World's Classics, 1998

FLUSSER, Vilém: http://www.youtube.com/watch?v=QFTaY2u4NvI: "television image and political space in the light of the Romanian revolution", 1990

SONTAG, Susan, “Regarding the Pain of Others”, Penguin, 2004

STEMMRICH, Gregor, “Dan Graham’s homes for America (1966): The Artist as Photojournalist and The Discovery of the Suburbs” in “Daidalos – architecture art culture” issue 66, December 1997

TAGG, John "The Burden of Representation - Essays on Photographies and Histories" Communications and Culture 1988