Words for the Future – The Re-Publishing Project

What does it mean to re-publish something? How to engage with new publics? And how to drive potential new meanings by departing from specific, already defined paths? We've been asked to re-work the original 10 essays and contributions previously collected in Words for the Future by Nienke Scholts, by unfolding the meanings deriving from the process of re-publishing. 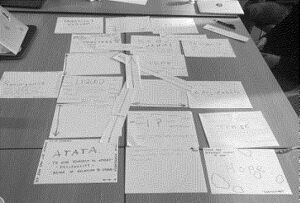 First attempt to highlight inter-connections between the 10 words

With Steve, we approached the original essays first by:

Questions of language: the use of the english is limiting the audience. How can the material be expanded towards different languages? How can we use the license for it? Encouraging different translations, or making an audio-lecture for blind people. 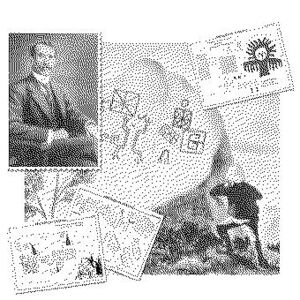 Then, the challenge of translation is generally defined by the variety of features, such as the language structure, which differs between languages. Could we trust to any translation? Or should we be sceptic about all of them? In the process of translation we could loose specific details, specially if we deal with ultra-local languages or lost dialects (See Otherness).

Otherness = Alterity, the "other of two" (Latin alter). It is also increasingly being used in media to express something other than "sameness", or something outside of tradition or convention.

We grow as humans with our "rightness", built on your life and education background. Religious belief for example fulfill the urgent wishes of human beings, working as an antidote to their helplessness. Our parents first shapes our idea of rightness, but we really start to know who we are when we first encounter the Otherness, just one step aside our home. What define us, as individual, is the complex pattern of relationships between us and our surroundings. According to trascendentalism, as we come to know ourself, we remove the otherness of nature. Working towards to remove this sense of Otherness will help to embrace it as a part of the Oneness that we seek with the world around us. Humans is only a part of the wholesomeness, occupying a specific part inside the world. Contemporary world is actually fighting against the Otherness. Migration Issues, Racial Injustices, Gender Inequality are just some frameworks where humans are badly dealing with the Otherness.
In physically and culturally constant environment innovation is rarely useful. The failed innovation turns into an advantage on environments. Languages came with the need to interact with the others, relating to the environment. The Pirahas language never changed too much in its evolution, and their environment too. Climate change affect the boundaries, leaving vacant spaces for the "intrusion of others". The challenges are to keep the diversity that makes flourishing the innovations.

Until free software licensing was developed, the only option was to just outsource the risk to the other users, but it could change over time. Eventually there were developed some rulesets, that would allow to use the software, following these certain instructions of usage. The licensing, that is a bi-lateral agreement between author and user, could be developed in many ways, depending on author's needs. When Free Software arrived, the goal was to distribute code with license, in order to give regulated access to the sources. From the 90s, Art and activism looked at software licensing practices in order to share content over and over. It could be symbolic gesture, to express a certain vision of the world, but also a manifesto for like-minded individuals. The main idea is to think about the license as a way of making an ideological or political statement, relating to your creative practice. 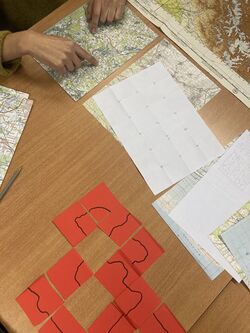 Words have the power to shape reality. Wor(l)ds for the Future is a set of map-making tools to re-imagine and collect wor(l)ds, and to re-publish an everchanging atlas. We invite you to delve into the materials and traverse the texts in any way you desire: by cutting and pasting the printed matter, or by unravelling the texts online. The choice is yours. You can reconstruct images and reinterpret words to create Wor(l)ds for the Future.

This project is a republication of Words for the Future (2018), a multivoiced series of ten booklets. In the 2020 version, we reinterpreted the original material through methods such as annotating and prototyping in Python (a coding language we used to analyse text as texture). The ten booklets were cross-examined and mapped in order to find interconnections and links.
Final outcome: https://issue.xpub.nl/13/index.html 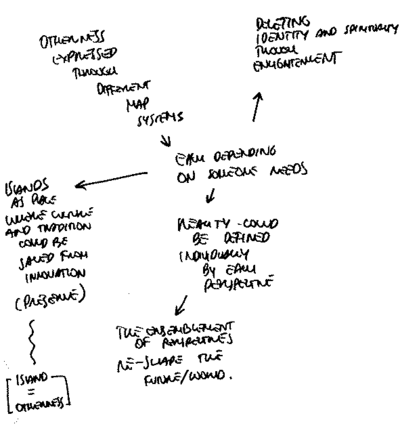 Experience is the necessary transition to achieve the understanding of the alterity. Facing the “Other” affects our identity on the pre-built sense of “rightness”, shaped first by family education. The text aims to explore - between an antropological and linguistic framework, a rare and still intacted sub-group of the human diversity.

Extract from You, the others – Wor(l)ds for the Future

This personal re-interpretation is based on pre-existing essay's narrative and structure. While deleting any kind of specific references to the author's experience, we find along the lecture blank spaces, to be eventually filled with personal references. This process of re-appropriation doesn't affect the message of the essay, but rather resonates a possible approach to Otherness that could be relevant in a wider range of its manifestations, such as the encountering of an Indigenous man in the Amazon or the casual meeting with your new neighbour.

Some of the original references to the people and places along the story have been erased to make space for your individual perspective.

Islands become an experience and a tool for understanding the world through the eye of the Otherness.

Trans-ocean explorations started in XV sec. and boosted by America’s discovery, have irreversibly changed the face of the world while affecting our perception of the “Other”. Otherness could also specifically describe how a dominant group could define other groups with less power, usually a dominant majority.

From the perspective of a map, the process of “Enlightenment” has been unreservedly redefined. Since its fruition, the drawn boundaries of the globe are made in a way as fluid and easy, as drawing some lines on paper during a phone call.

With the same readiness, it has been eventually possible to erase the spirituality and identity of “other”, small, submitted cultures. When the necessity to represent the “new world” by this new, western-oriented perspective came up, it brought with it the geographical renaming of places the conquistadores were imposing on. Naming is political, too. These outsider-imposed names (exonyms) are not the names that the various people knew in their own language (autonyms). The name is attached to stories that help people make sense of their lives, while also helping to understand how people fought to protect their boundaries. The current islands’ names have long been erased due to the limitations affecting cartographic representations.

Extract from Island of Alterity

Islands, for instance, are the only places where natural borders imposed by the water help to preserve local cultures from eventually-imposed boundaries. These are often followed by invasions; while making a privileged space for developing small and autonomous communities.

Sometimes centres of activity, residing on margins, the islands keep a hold onto an evocative force, even when they supposed to be only imaginary, as the example brought by Utopia by Thomas More (1516) would call back. Islands concretely represent the Otherness in its purest essence, while the Otherness finds in the Islands a flourishing soil to grow, remaining limited while still protecting, at the same time, their natural conformity. Islands become an experience and a tool for understanding the world through the eye of the Otherness.

Otherness In this Imaginary Atlas, Otherness is embodying various types of islands’ representations, which you can use to imagine and build new community-structures for the future.

All the pictures were taken from this database: https://historicalcharts.noaa.gov/search_col

Text as a Map

Etract from Text as a Map, Wor(l)ds For The Future

The nouns, stripped of all context, are just nouns. Otherness presumes at least two terms of comparison. What defines the identity of you and others; of all things, both tangible and intangible, are the correlations between these things themselves. Meanwhile, the ensemble of all these connections continues regenerating the reality in which we live.

Based on these assumptions, our world is shaped by complex patterns of associations between all the things we encounter day-by-day through life experience, which are dependently inter-connected: nature, people, culture, language and knowledge. Holding the Otherness becomes the only possibility to re-imagine a well-balanced future, that would include space both for individual perspective and small-fragmented realities, which, in turn, could be eventually preserved from a ferocious innovation. 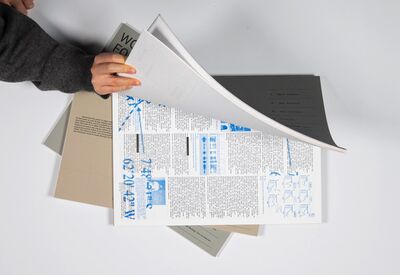 
My roles in the Issue