During the Special Issue 15, I learned new programs to discover hidden knowledge and diffused it using my own voice. I was fascinated by the continuous exchange of interpretation between the original text, the computer, and me. Especially, in the fifth broadcast « Broken Phone », I read aloud the 12th chapter of Exercises de Styles from Raymond Queneau and classmates made mixed sounds from my voice. When I received their outputs, the content and my voice were completely changed; to point that new content was almost created! At one point, I was bordered by my voice which represents too much my identity, so that the objectivity of the information may be spoiled. I tried to find a « neutral » and « standard » voice but after, I recognized the violence of the « Standard » idea. In the end, I created a virtual space (web) « Standard Dictionary » where all my linguistic errors are considered as Standard language.

Q. Do we want listens to understand or at least, feel the impression of the original file?

Q. Two different translations (from image and from text), do they have to be connected?

The XPUB Department of Digital Records - Case Number: 92 with Kendal

A statistical interpretation of term specificity and its application in retrieval

"This is the generated version of ‘A statistical interpretation of term specificity and its application in retrieval’ by Karen Sparck Jones. Those words you hear now are selected as « important » by an algorithm called TF-IDF when the text is juxtaposed with... 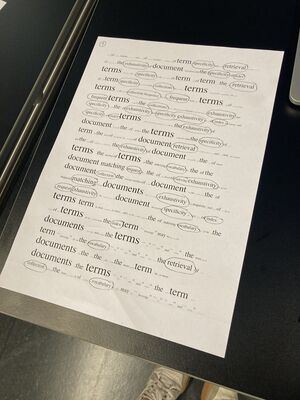 Camilo and I are working on a current protest in Colombia. Through our conversation, we explain what is happening there, require the empathy of the world and express a homage to victims. We start in English, but it changes gradually to each mother tongue. The linguistic notion represents geological distance; Colombia-Myanmar-80s Korea distance and our long-distance empathy.

There are many ways to call this internationally known children's game, often quite dubious and loaded with a colonial heritage. For today we chose to call it the "Broken phone", a broadcast of the master experimental publishing, Piet Zwart Institute Rotterdam and hosted by Martin and Euna.

The game is often played like this, the first person whispers a sentence to its neighbor, and the pattern continues. At the end of the loop, the first speaker is supposed to hear back what it first said, but most of the time, the stories is something radically different from the original.

What you'll hear first is the recording of the original text, The Rainbow, the 12th chapter of Exercises de Styles from Raymond Queneau published in 1947. One group of Xpub1 students modified this original audio file and the next group reused the previous group's recording and so on and on and on! The goal of this 5th radio session is to experiment with the unexpected audio distortion of an audio source that is being transformed, and retransformed, and on and on and on!

The Broken Phone is followed by 'between arepas and kartoffelsalat' (some badly translated tasty cooking sounds).

This week broadcast is hosted by: Euna Martin We would like to thank our contributors: Louisa, Jacopo , Kendal, Federico, Clara and Camilo Enjoy!

for "the port is already in use"