Domani ti dimenticherò meglio (Tomorrow I will forget you better)

First draft: I made a 3 min video by recording a virtual journey on Google Earth. The video starts with a still overview of a little town by the sea in the South of Italy. After a few seconds of silence, the voice-over breaks in speaking in second-person plural: "Forse non ci siamo mai appartenute", Maybe we never belonged to each other. That first We instantly engages the narrating voice to the recipient of its words: a mysterious other whose name won't ever be revealed. As the voice-over keeps speaking, the cursor crosses the software's interface all the way down to the bottom to grab the icon of a little, orange man. Once the icon gets positioned in a central spot of the town, the viewer is dragged into a street-view of the same. As they get sucked into the street-view, soft landscape sounds of the street and the sea approach the viewer, gently. They're now in front of the main facade of a modest, white hotel by the sea. The cursor keeps pointing out, scrolling, grabbing, and moving the interface of the software as the director of a film does to the eyes of the viewer. Only, in this case, the voice-over happens to be the director of the video and is live broadcasting a meta-virtual-cinematic experience. The cursor is then an immediate effect of their thinking.
Once again, the viewer gets pulled out to the overview of the town and the environmental sounds that surrounded them earlier get quiet. The narrating voice keeps addressing that mysterious other, though it feels more as if they were talking to themselves and no one other than the viewer was listening. Is the viewer the actual recipient of the voice-over's words? Words of love, words of loss, words of longing and memories. At times, the cursor moves tenderly on the screen as a human hand would do on a lover's cheek. When the viewer gets sucked into a street-view for the second time, they face a little trail in a cane field bathed in sunlight. The landscape sounds of the wind shaking the leaves, the cicadas hidden in the reed, and the sea from afar welcome them.
The images provided by the software are sharp, extremely factual, yet filled with glitches. This peculiarity of Google Earth's visual language breaks the illusion of actual, brutal reality that is able to create. In fact, Google Earth's aim seems to register reality, mapping the world's territory accurately rather than representing it. At the same time, the 360 degrees views uploaded by the users of Google on the software are everything but realistic. Frequently, these images happen to be distorted as it's possible to see in the last scene of the video: the line of the horizon is broken in the centre of the interface and tends downwards. Within these errors of transcription, the software becomes visible. Once that virtuality is declared, the eyes of the user are disillusioned. Disillusion is one of the principal tangible feelings coming out from the voice-over's words as well: the narrator virtually revisits a reality that they once lived and that is now lost in time. In a way, memories are also a virtual representation of reality. They are the images of the world impressed on one's peculiar subjectivity. Therefore, they shrink and inflate according to the emotional baggage that one has. 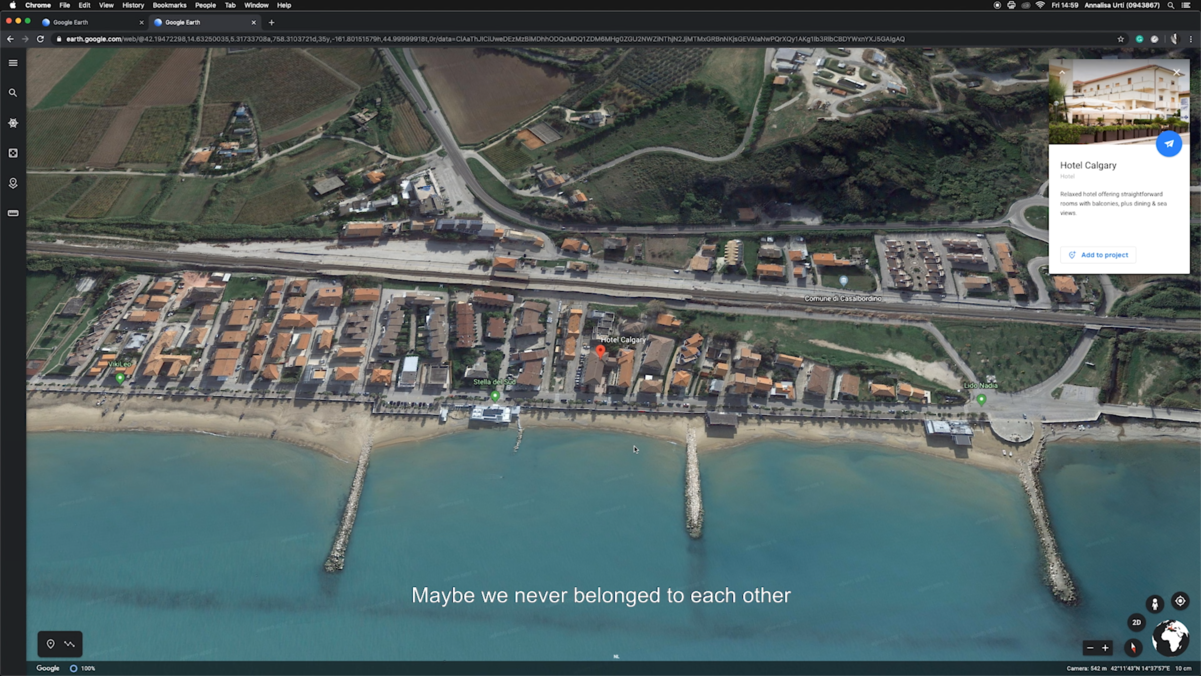 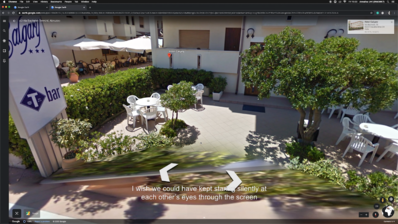 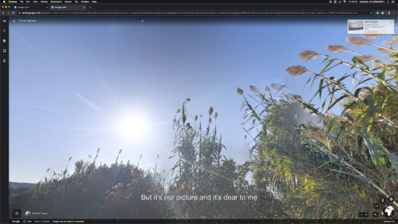 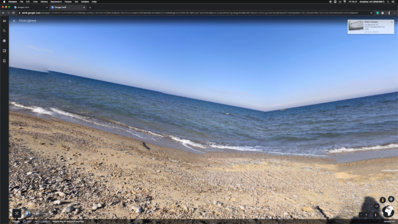