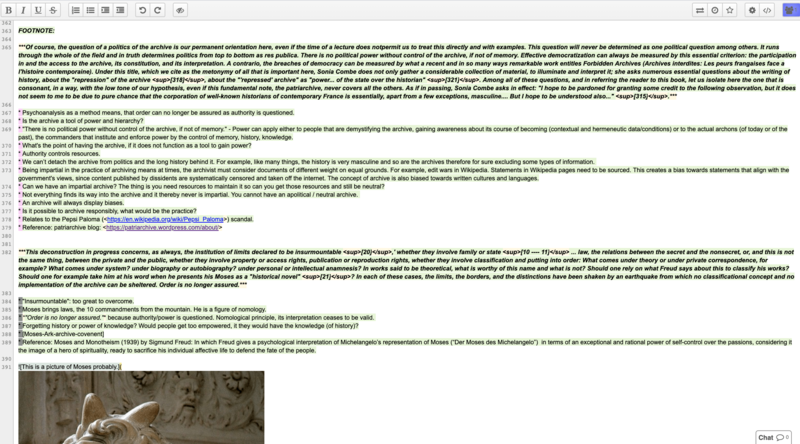 Revolutions are built in collectivity.
What is it to be in the position of publishers in period of conflict ?
Assuming a collective position within the group, for the good of the group ?
Somehow manufacturing conditions of urgency in an evironement of relative safety can highlight a certain sense of respect for the labours of urgency that we are archiving.

The "Swarms" were the result of three intensive seesions, from each of which a fully wrapped up publication had to come out.

These sessions were 3 session of Slow reading, where we opened a collective pad to gather random thoughts, comments, questions and ideas. We then used OSP's prototyping project "Ether2HTML", to design, wrap, and print them on the spot !


- HOT OFF THE PRESS

Parts of these Swarms found their way all around this website as bits of conversation and collective writings, that have accompagnied us all along the process —
a handfull of unreferenced snippets from a lot of different places, conversations.
This work was a work of assemblage, of collage, to create stand alone chapters that would then be sparkled around the web site, read independently or in relation to some of the tools and methods we've used during the project.

I thought it was nice, this idea that these Swarms were like carbage, from multiple writers and speakers — Carbage being bits of leftover cloth that tailors keep for future reuse.

For this to be possible, they had to be reorganised in chapters that would make sens as stand alone, to escort the tools and methods, and lead to a bunch of relevant (or not) associations as they unfold. One of our first references for the Website was the "Whole earth catalog". 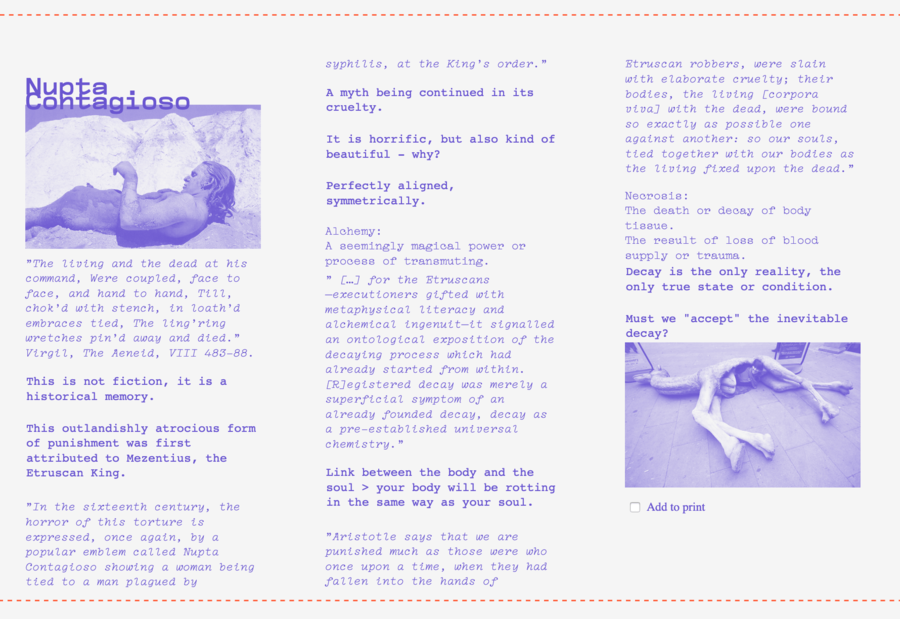 An annotated reader of "Archive Fever" By Jacques Derrida.

There is no political power without control over the archive, if not over memory.
You can’t detach an archive from politics and the long history that formed it.

All contemporary phenomena must be understood contextually and historically, in relation to the power structures — or institutions — that shaped them, and are still shaping our understandings of ourselves, and of our times.


Is it possible to archive responsibly?
What would that practice be? How do you sensibly collect, understand, and then *structure* memories?

"Let us not begin at the beginning, nor even at the archive. But rather at the word "archive" - and with the archive of so familiar a word." 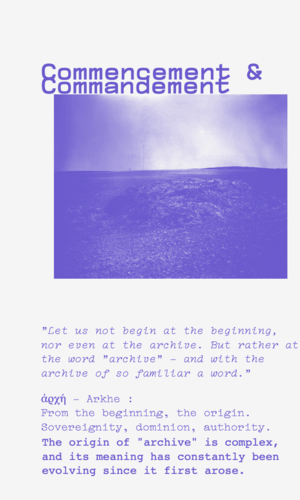 ἀρχή - Arkhe : From the beginning, the origin. Sovereignity, dominion, authority.

Commencement... : An act or instance of commencing, beginning.

...Commandment : A command or mandate.

Arkeion: A domicile, an address. Residence of the superior magistrates, the archons, those who commmanded.

ἄρχων - Archon: Ruler [Greek, *arkhein* to rule] One of the 9 chief magistrates. of the city states.

"On account of their publicly recognized authority, it is at their home, in that place which is their house (private house, family house, or employee's house), that official documents are filed."

What comes *first* and therefore is *chief* ?

Ontology...: Study of the nature of existence or being as such.

...Nomology: The science of law or laws.

" They do not only ensure the physical security of what is deposited and of the substrate. They are also accorded the hermeneutic right and competence. They have the power to interpret the archives. "

The one who holds the archive (the data) is in the position (and has the authority) to interpret it.

Domiciliation : Establishment at a place of residence.

"It is thus, in this domiciliation, in this house arrest, that archives take place. The dwelling, this place where they dwell permanently, marks this institutional passage from the private to the public, …"

Edict: A decree or proclamation issued by an authority, and having the force of law.

Black Box: Anything that has mysterious or unknown internal functions or mechanisms.

in which the nodes of a network are connected to each other.

"With such a status, the documents, which are not always discursive writings, are only kept and classified under the title of the archive by virtue of a privileged topology."

Topo-nomology : The intersection between the place and the law.

"At the intersection of the topological and the nomological, of the place and the law, of the substrate and the authority […]. They all have to do with this topo-nomology, with this archontic dimension of domiciliation… "

"…with this archic, in truth patriarchic function, without which no archive would ever come into play or appear as such." Topography: A description or an analysis of a structured entity, showing the relations among its components.

"A science of the archive must include the theory of this institutionalization, that is to say, at once of the law which begins by inscribing itself there and of the right which authorizes it."

Demystify: To rid of mystery or obscurity, clarify.

"This right imposes or supposes a bundle of limits that have a history, a deconstructable history."

The fact that for a really long time, and still today, it is harder to archive oral cultures, and there 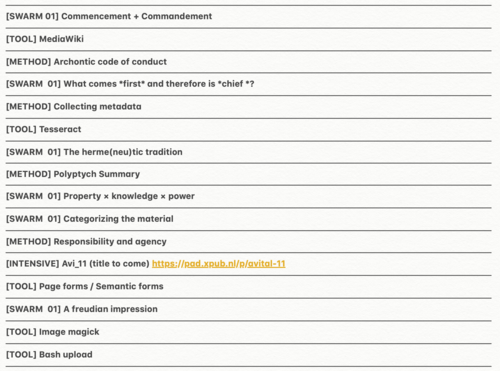 PARASITES
A cross reading of 'A Communication Primer ›, by Ray & Charles Eames (transcribed), and "Rat’s Meal/cascades, by Michel Serres"

Language is never just there, never neutral, nor innocent. Words are actions. Having a multitude of perpectives on a subject will broaden your understanding of it: iterrupting can be a tactic, a tool to narrow down the panorama, and shape it to their interests.


Propaganda and censorship are constantly trying to limit the fair distribution of communicating ressources. Authority controls resources, and will try to take down any content advocating for political dissidence or discordance. Who gets to articulates the laws? Who articulates the memory of it ? Don’t forget this.

How do you publish in times of such political urgency ? What do we have to protect ourselves about ? Who from ? For how long ? And what tools do we need to do it ?

Communication: Act or fact of communicating. Interchange of thoughts or opinions...

"The era we are entering might well be characterized as an era of communication."

Language: Any set or system of such symbols enabling people to communicate intelligibly with one another.

Signal: A gesture, action, or sound that is used to convey information or instructions, typically by prearrangement between the parties concerned.

transfer of signals or data within a computer or between a computer and its peripheral equipment.

"The *information source* selects the desired message out of a set of possible messages, the transmitter changes the message into the

Code: A system of signals used in transmitting messages. A systematic collection of regulations or rules of procedure.

Encoding: To change something into a system for sending messages secretly, or to represent complicated information in a simple or short way.

Decoding: To discover the meaning of information given in a secret or complicated way or to understand the meaning of a word or phrase in a foreign language in the correct way.

A term used in the communications field to designate any outside force that acts on the transmitted signal to vary it from the original.

represented objects and forms are perceived or depicted.

Noise is everything that leads to the interpretation of the painting: the eyes, and nervous systems, and previous conditionings of those who are watching it.

"The city rat invites the country rat, […] where the city rat lives in the house of a big tax farmer. But we know that the feast is cut short. The two companions scurry off when they hear a noise at the door. It was only a noise, but it was also a message, a bit of information producing panic: …"

"… a rupture of information."

Rupture:Breaking apart, the state of being broken apart.
A breach of peaceful or friendly relations.


Rupture de stock: French, A deficiency in amount, a temporary lack of material that prevents from providing the demand.

"Was the noise really a message? Wasn't it, rather, static, a parasite?"


Parasite: An organism that lives on or in an organism of another species, known as the host, from the body of which it obtains nutrient.

"If anything acts on the signal so as to bury it in an unpredictable and undesirable way in the communications system, it is noise."


The "Rat" is always interrupted

Uniformity: Always the same, as in character or degree; Lack of diversity or variation.

Distortion: The act of twisting or altering something out of its true, natural, or original state. A distortion of the facts.

Tax Farmer: A parasite who has the last word, who produces disorder and who generates a different order." A parasite, living off […] the land. Industry pillages and plunders: Such farmer is a part of a matrix.

"The modern illness […] , the engulfing of intelligence in the leisure [jouissance] of the homogeneous. […] ; Real production is unexpected and improbable; it overflows with information and is always immediately parasited."


Publishing in times of urgency

Idiosyncrasies: A structural or behavioral characteristic peculiar to an individual or group.

"Professional archivists have the power and authority to construct a dominant narrative on virtually any topic. Unfortunately, the archival world is built on a legacy of colonialism, appropriation, and community disenfranchisement. The power imbalance between archivists and the marginalized communities they often document leads to the dissemination of inaccurate and harmful accounts." Reference:

Wikipedia edit wars: Conflict of interest or non-neutrality. When Wikipedia administrators/editors keep going back and fourth with statements in Wikipedia due to a lack of source. This creates a bias towards statements that align with the government's views, since content published by dissidents are stategically and systematically censored and taken off the internet.

An annotated reading session of "The Corpse Bride: Thinking with Nigredo" by Reza Negarestani.

Decay is the only reality, the only true state or condition.
Must we "accept" the inevitable decay?
When ideas decay, history is boud to repeat itself.
An idea must be embodied, to be externalized to be passed onto different levels and states. Does the decay of the body necessarily lead to the decay of the thought? How do you counter the loss — or censorship — of the materiality that constitutes a body.   You can’t prevent a body from decaying, but you can engage in the perpetuation of its the intellect.
Intellect can remain through other bodies.  Intellect can be recorded, can be documented.  How can a soul remain when it is substracted from its body?