From Media Design: Networked & Lens-Based wiki
< User:Claxhanson
Jump to navigation Jump to search
" Capturing images of law enforcement officials during intervention, and distributing them to various media, including social media, can pose a risk to each of them and their families.

Indeed, the police are intervening more and more frequently in a context of significant tensions linked to a distrust of public authority and associated with an increase in daily violence.

[…] The purpose of this bill is therefore to systematically make law enforcement officers unidentifiable in the entire media sphere, including social networks. This is essential to ensure their safety.

The single article provides that the dissemination by any means whatsoever and whatever the medium, of the image of officials of the national police, the military, municipal police or customs officials is punishable by a 15 000 € fine and 1 year imprisonment." 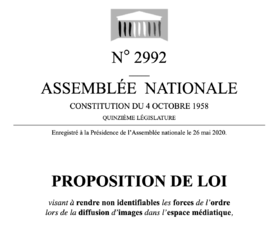 This is one of the latest Law proposal at the French National Assembly. This same proposal was brought up last December, without passing, but their insistence is in the image of a state, among many others, which constantly seeks to censor by adopting increasingly authoritarian measures, and prohibiting anything that would compel them to bear even minimum responsibility whatsoever on their management of crisis. These governments are all about impunity and immunity and are trying to constitute their complete starter kit for the perfect little dictator's poop bag. Perpetuators of violence and abuse must be seen, and MUST BE HELD ACCOUNTABLE !

Without these images, the thousands of complaints filed by hospital staff and other citizens, for manslaughter, failure to assist someone in danger, deliberate endangerment of the lives of others, and so on so worse, can’t be supported, and are in the process of becoming purely and simply neglected and overlooked. This law CAN’T pass, and WON’T pass, but this mythod is an attempt to think together around ways in wich we can overcome these forms of censorship.

The sounds you hear are encrypted images. In this case, close up screen shots of the badge numbers and faces of the police officers that have been filmed while perpetuating acts of abuse. These images were found on the app "Urgence Violences Policières", that is particularly targeted by this Law Proposal, and accused, in the said Proposition No.2992, of "Police bashing" and of "stigmatizing the police and circulating erroneous information about them."

The aim is to be able to defend ourselves and share important information (in the future, and in even more critical or grueling situations) without being repressed or selectively removed. This technique will need revision, because we’re not totally sure if the re-encrypting of the sound data (to reconstruct the image) is on point, this is why it is only, for now, a Mythod.