https://hub.xpub.nl/sandbox/~mmurtaugh/botswaller.html
"Developping some kind of chat bot is a good exercise"

(my contribution to the e-death industry) 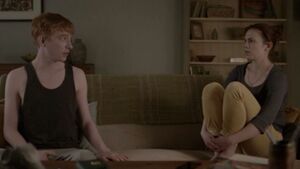 The 2013 "Black Mirror" episode "Be Right Back" centers on someone who's partner is killed in a car accident.
In mourning, she signs up for a service that allows her to communicate with an AI version of them based on their past online communications and social media profiles -- ultimately, turning it into an android version of her deceased partner. But he's never exactly the same.

Of course, making bots is a source of monetization that deserves the best engineers to be looking into it. GAFA&M have all started to integrate chatbots to their platforms. They’re even starting to infiltrate our discussion spaces with them already.

For the time being, it seems that virtual immortality’s appeal is more philosophical than practical.


Even though we leave an insane amount of data, we still haven’t reached the point where we have recreated the ultimate human soul.

Once you’ve uploaded all of your lost one’s (or your own) digital footprint into a digital version, it will potentially copy the way they/you used to speak but will be solely based on the things that have been said in the past. We haven’t managed to create an entity that embodies every conceivable aspect of human complexity. The real challenge is to be able to interpret emotions coherently so that your AI version of yourself can contextualize such of data.

Astrology, though the use is early related to astronomy, could be seen today not only as a set of data from the movements of the planets but as the attempt itself to use a mathematical system to interpret other sets of data that we do not yet understand.

It’s an intersectional practice between the scientific observation of cosmic movements (astronomy) and the esoteric realm of symbolising, searching for keys to understanding realms to which we do not have access, like the emotional realm, and others before.

If we can find some of the important features of a human, and classify them in a way that would be machine readable, we would be able to provide people with a soul to all these shadows. It might be a key to access our deepest, most private, intimate emotions, and enable us to recreate the people we really are.

Astrology is not a science, but a social fact. Despite being based on astrophysical and mathematical knowledge, it can be better understood as a language game and possibly as the most universal personality theory ever conceived by human beings.

The fact that it was never so good at predicting the futur became a great pretext for putting the whole subject under the table, and wasting the potential of the discussion around astrology as it needs to be intended today : an ancient symboloic language that can provide a deeper understanding of ourselves and of events, a healing art.

Reading the past instead of predicting the future

Because looking into the past is how we become immortal.

While it's difficult to really ‘define’ astrology, because of the many different systems, there is one thing that remains unchanged throughout each one of them: it is all about interpreting the influence of celestial bodies on our lives, depending on their alignment at moment X. (past events, future events, dates of birth,…).


Imagine being able to chat with any of your lost ones, reconstructed not only from their digital footprint but also with their mood at the exact moment they sent the message, the knowledge of the most intimate motivations that pushed them to listen to this song at this particular moment. Your AI could interpret and recreate each of these patterns, in real time. Your behaviours, your attitudes, all generated by the energies of the physical world.

We look into astrology to keep you immortal in the cosmic realm.