"a and a" is a series of generative story workshops each developed to adapt to a specific audience and topic. The stories have blanks to be filled in by the participants in order to create their own wonderful narrative. All based on Clara's Master research of "How can generated short story workshops be used as a method to express and deal with an issue?"

"I am using workshops to teach creativity to all" Clara, 2022

We believe that at a certain age creative activities such as drawing and writing are skills and not forms of play and expression. Many leave them behind with the excuse of not being skilled enough to use these "skills". The generative workshops Clara developed aim to forget this notion and help people relearn their potential. Anyone can write and draw. And anyone should be given the opportunity to use that to express themselves.

a project by Clara Gradel

The workshops use a printed and set story structure with elements to be filled in by the participants. With the addition of a set topic, the participants are taken on a story making journey to solve and express the topic given to them. It brings problems through the form of a “to be filled out” story and allows space for imagination. The structure of generating a story is very important in order for these workshops to work. One cannot simply give a participant a blank page of paper and tell them to write a story and expect results. The structure invites the participant and gives them creative control without feeling lost. After filing out their stories the participants have to illustrate the story which gives it new dimensions. Illustrating the story gives space for a different interpretation of what they have written and could also change the perception of their words.

This method aims to be therapeutic as the participants are engaging with the topic in their story. The workshop also opens conversations as the participants are invited to discuss the story they created with their given problem. It aims to create a playful way to tackle serious topics. It also aims to open minds and create a new perspective on expressing and dealing with a topic.

This whole project can also be valued in the digital archive that was created. The archive is in itself a playful interactive way to read short stories created by previous participants. If you wonder about how a pen and a banana can help you create a remote office then there’s a story in the archive just for you. It lets you wonder in your mind about the possibilities the things around us can do. It also makes some of the story stay with you and influence the way you might think about the things around you. It gives an impression and does so in a playful way. The archive also portrays the “random object method” utilized in the workshops.

The random object method is simple, it is inspired by a child’s imagination. The method allows any object to be anything. An object to be clear is anything from a lion to a carpet. It is an animal, an insect, a thing, a letter, a thought as long as it can be imagined it is an object. This method can be used in many ways for different objectives. The first step is to think randomly of an object. The next is to be faced with an objective. And the last is to give your object the ability to overcome this objective. Let me create an example, my object will be a potato, the objective is to travel and so I decide I will use my potato to grow more potatoes and then mash all the potatoes and fry them in the shape of a boat which will take me on a journey across the sea. The hardest part is about thinking of how to use the object in what might seem unrealistic. It is about giving your object the capabilities you desire and need. That is the random object method used in a simple form but this method can be used further. It is used in the structure of my generated story workshops. The essence of it is not complex, it is rather simple. All you need is an objective, such as the ones set in the generative story workshops. This whole random object puts into practice the way a child might solve things. It’s about triggering and in a way practicing borderless imagination. A tree is not just a tree just as Jean de la fontaine teaches us that a lion is not just a lion.

how to generate a story

This was the kickstart of this project and was used to develop the concept and idea further. There was no theme other than trying to figure out what was necessary in order to get people to generate a short story. The workshop took place in Leeszaal, in Rotterdam, on the 11th of October 2021 and it was split up into 3 short 10min workshops. The challenge was the short amount of time but that was also the tool used to get people not to overthink about the story they were creating. The participants of each workshop had to pick a piece of paper that contained a thing they had to use in their story. For the first workshop the participants picked characters as a set variable, for the second workshop it was a location and for the third workshop it was an object. This workshop was a great first step in order to understand the dynamic of creating a story and the amount of guidance required. 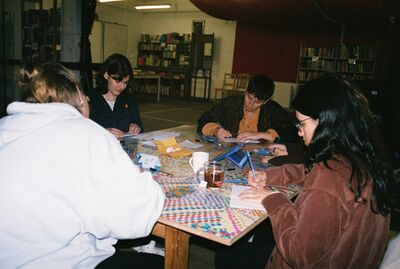 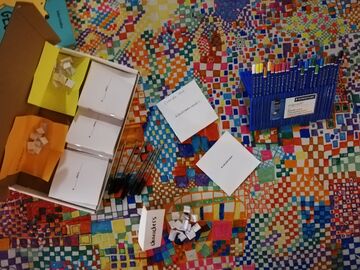 how to find housing

This was a collaboration with Jara van Teeffelen. After the workshop at Leeszaal it was clear that the workshops needed a storyline driven by a specific topic. Jara tends to work with Palestinians living in the West Bank, she focused her work on taking a Palestinians' daily life struggle into context and how one could use an object in order to help them overcome a challenge. Together with Clara's use of a generative story structure they created a workshop on the topic of housing problems. This workshop took place in Mediamatic in Amsterdam from the 28th till the 30th of October 2021 and at the time there were ongoing protests about the housing crisis in the Netherlands. This workshop was a way to open up a different way to have a conversation about what was happening. There were 4 different versions of the story with each a different problem to overcome which were problems they had faced as students in search of housing. 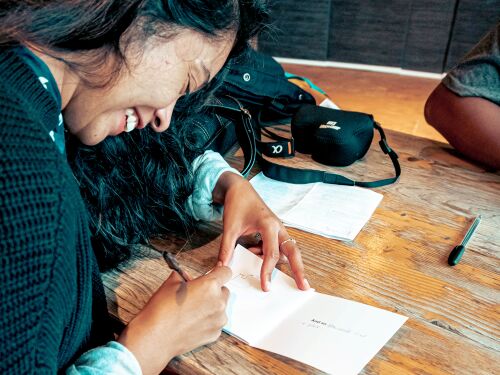 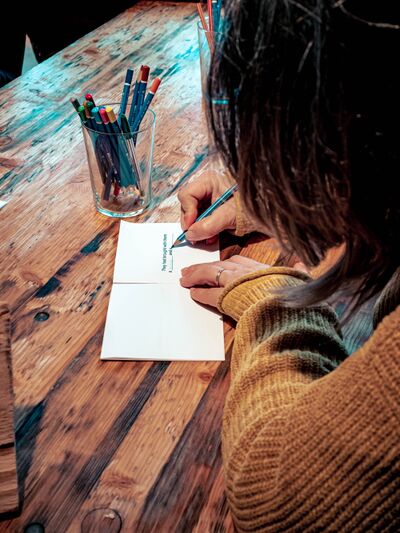 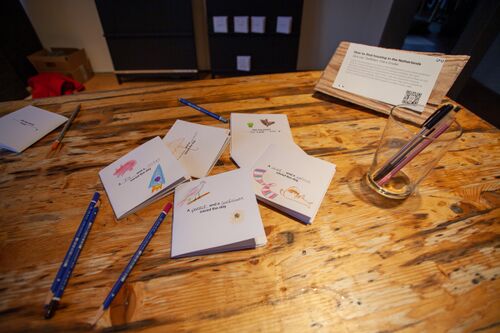 how to work remotely

This workshop was with people working in an office in Amsterdam and it took place on the 17th of December 2021. The topic of the workshop was about working remotely which was something they had been dealing with during the pandemic. The format had to adapt because it had to be online with a group of more than 30 people. The book format changed into a google slides and instead of drawing the participants could use any found image to illustrate their story. This was an insightful workshop that made people open up to being creative as the workshop provided an easy and comprehensible format with just enough guidance. It helped them have fun and bond with each other as they read out their stories. 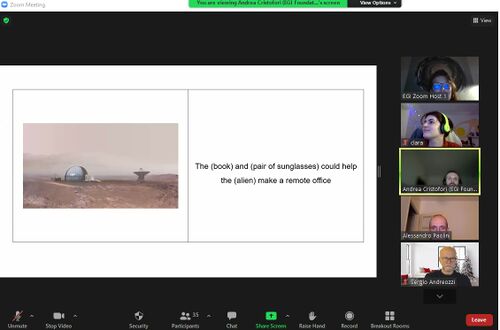 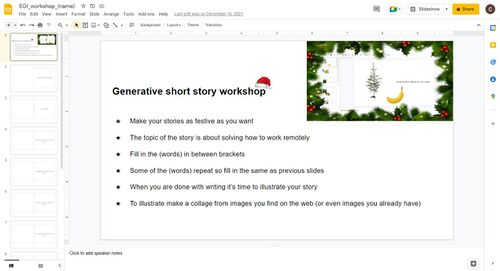 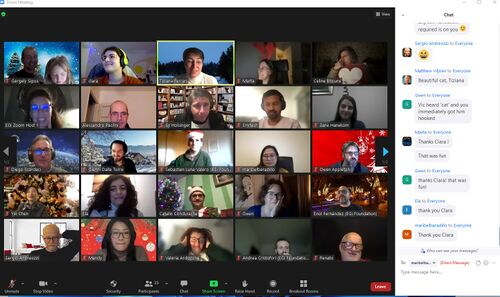 how to confront time

This workshop was organized to work specifically with a younger audience. It took place in Den Haag on the 19th of March 2022 with students aged 12-16 that were from the Young Talent course at the art academy KABK. It was up to the students to come up with a topic they wanted to have the workshop about, which ended up being "time". The format of the publication of this workshop was inspired by a calendar format to reflect the topic of time. 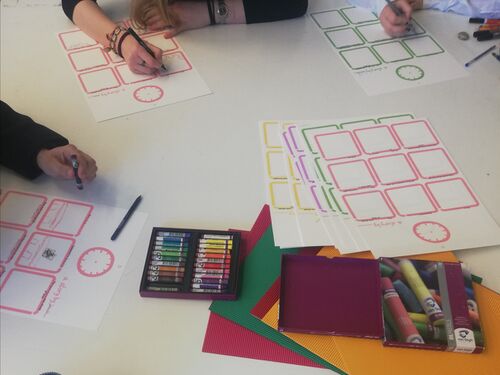 how to regain freedom

Again collaborating with Jara for this workshop but this time using a topic that was inspired by her thesis. Jara being half Palestinian perceives freedom in a certain way and was interested by creating a workshop that would enable you to regain a lost freedom. The workshop took place in the art gallery W139 in Rotterdam on the 20th of March 2022 and welcomed people of all ages. In their stories the participant introduce one object that would help them regain the freedom that they’ve been missing. How could a random object support their value of freedom? Using a poster zine layout the publication also played with a contrasting idea, the poster could be displayed and played with the visual of protesting whilst the fact that it could be hidden and folded was to reflect on the sensitivity of protesting for freedom. 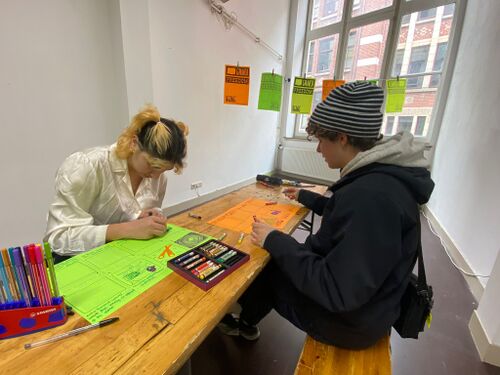 how to find childhood

The topic of this workshop was created as a reflection on the research collected for my thesis. It took place during the XPUB 2022 Graduation show at WORM. This generative short story took you down memory lane in search of the child within you. First thing the participants had to do was pick a random stone animal that later they would learn was there to help them find their lost childhood. The printed format of the story was like a stage allowing you to visualize your story in 3D. Which allowed everyone at the end to put on a show and take us through how they regained their childhood imagination. 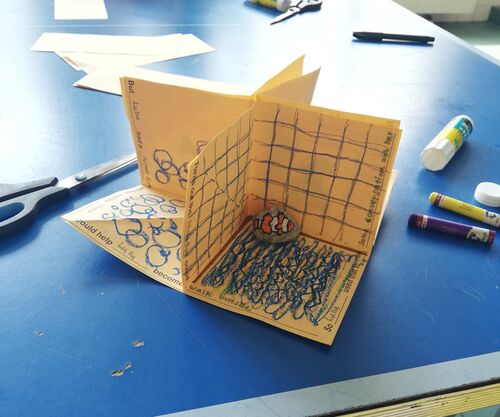 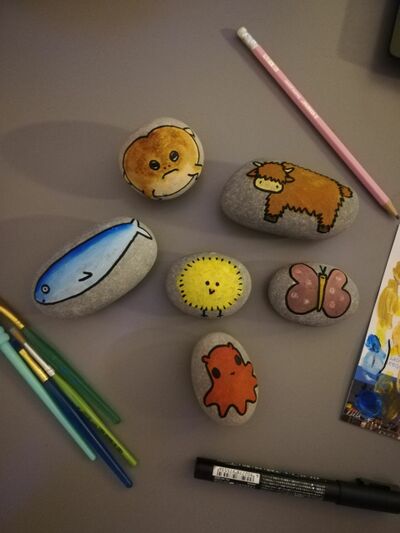 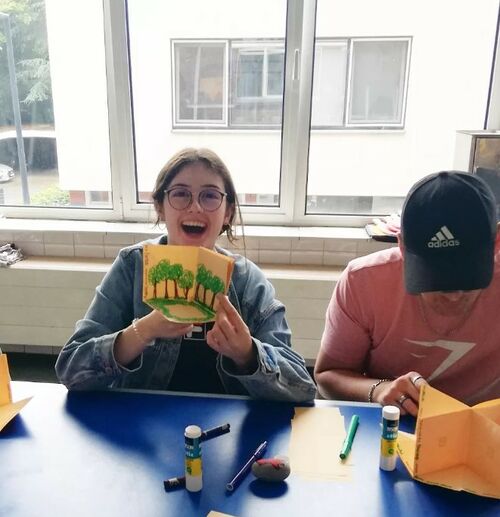