At the end of the introductory first session we were annotating a recording. The recording was a reading of "She Unames Them" by Ursula Le Guin.

Annotation:
~sliding into their anonimity
~return to the donor
~gave back their names to whom they belonged
~trailed behind them like tin cans tied to their tales
~the hunter could not be told from the hunted
~my words must now be as slow as tentative as the steps I took going to the path away from the house

Reaction:
I have a name
I am present
I am not seen
I have been muted
I am not here
I am in the background
Unheard
Unseen
Unoticed
But named 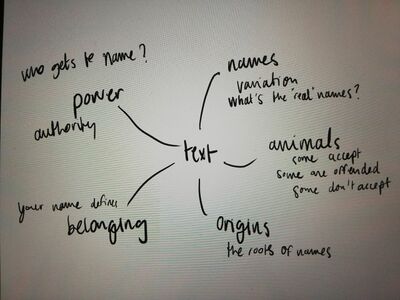 For the first broadcast I stayed with the text of Ursula Le Guin and focused on reinterpreting it. I played with repetition and also used it as a way to learn basics on using Audacity as a tool.

This week I was together with Nami in charge of the broadcasting so we had to make a website and also broadcast on thursday.
I wanted to develop from the last session who was not technically a live broadcast and I wanted this time to learn how to do a live broadcast much like a radio. I learned to use BUTT to stream live from my computer and from that set up a live sound on an html so people could as soon as they opened the page listen to what I was streaming from my computer.
After gathering all the material from the class we created a schedule with some live performance and pre recorded sounds that would be streamed.
For mic input I used a jisti call because when using butt you could only use one sound input which was the sound in computer and so we couldn't plug in a microphone, so this was the way to solve that and still be able to broadcast live talking input. Started learning to use Sonic Pi to create sound, which is a code-based music creation and performance tool. So after the previous week where I was caretaker I decided that this week I would be more free and experimental using this tool.
add visual Work created for the broadcast

I created 3 short recording to be used as transition sounds for the broadcast of the week.

Exeprimenting with text to speech and again working with Sonic Pi. I used a speech to text and then from recorded a voice recording of that text. 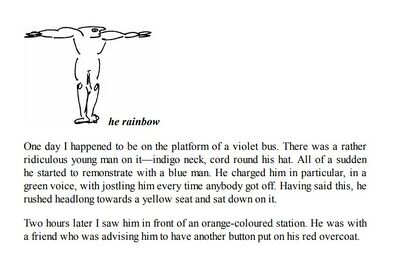 Speech to text:
The rainbow.One day I happened to be on the platform of a violent bus. Yeah, there was a reading this young man on it.Singing.All of a sudden he started to remonstrate with the Blue Man.It charged him, in particular in a green boys with adjusting him every time anybody got off.Having said this, he rushed headlong toward the yellow seat and sit down on it.Two hours later.I saw him in front of an orange colored station.He was with a friend who was advising him to have another button put on his red overcooked.

Work created for the broadcast

Reading of the reinterpreted text from speech to text to speech.

Each week I created a web based soundboard on a certain theme and recorded a work from the soundboards I created. I also worked with ascii animation and other various elements that brought the webpages to life such as gif and web page never ending ambient sound.
This was all inspired by https://driveandlisten.herokuapp.com/ which is a beautiful website that takes you on a drive and let's you listen to the live local radios. 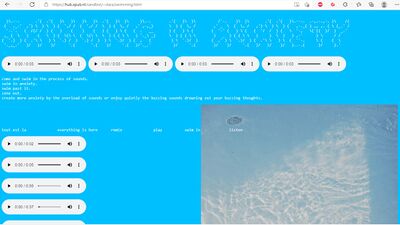 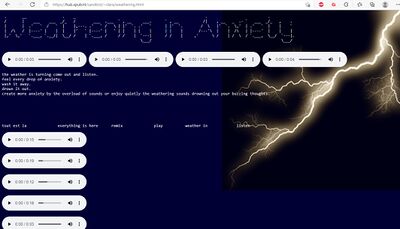