Special Issue #08 — The Network we (de)Served

In my project, There are three infrastructures I made to host, to chat, and to publish.
My server — A hosting infrastructure where I talk about a dependency map, a web tool for tracing the routers, and some situations I went through whilst installing the server.
An XMPP(Extensible Messaging and Presence Protocol) that is a chatting infrastructure which I eventually made my own tool with.
An Annotation Bot as a media tool — A publishing infrastructure that I had been developing as a way to annotate some thoughts.

From the very beginning of the special issue #8, we started to have the Infrastructour where we visited each other's place to install our own server. I remember I was quite confused on what Roel and Manetta meant by installing the server, and how does the procedure of installation will be going on. I have to admit that I was quite knowledgeless on network as a subject of this special issue #8, except some of my shallow knowledges on how to connect with WIFI on the electronic devices or how to reboot the router that seems to create a WIFI.

With running about a bit of confusions, we had to choose a device for our own server in the meantime. There were six RaspberryPis, a very old mini laptop and a device that looked like a gameboy I had back then around 16-year-old. I was doubting a lot in my head on deciding a device. Although all the devices seemed to be working equally, somehow I was very serious on the selection of the device that is going to be used for installing my server. Ridiculously enough, my laptop was broken at that moment, and I was waiting for my new laptop to be arrived from Korea. Since we needed to have a screen to set up some configurations with the device immediately, I had no choice but to choose the old mini laptop that has a screen, so that I don't need an extra screen to set up some configurations. Moreover this means that whenever I want to check my device, I could check the server in a convenient way because it has a self-contained screen included so logging into the server from another device that has a screen is not needed. It was like killing two birds with one stone.

Having a decent device, it was still hard to install the server. The problem was that my apartment has a central network system where they control all routers connected with the central system. Eventually I couldn't access to the router in order to open my server. This centralized network system on top of my router blocked me from installing the server. At that moment, I was very disappointed that I won't be able to install in a proper way. Luckily, I settled down on Artemis' router which shares different devices including hers, mine and Rita's.

At this point, I questioned myself on what does dependency mean in our network. Having planned to host the server that is independent on the web, it's not anymore an independent server when sharing the router is happened. To me, owning your personal server means that you possess full control of the server. However I could already see some physical and social dependency problems in many ways. Some of dependency issues occured not only from the accessibility of the router, but also from getting permission to use someone else's router. If Artemis doesn't allow me to come over her place to check my device, then I can't do anything with the device. Moreover, if Artemis ever going to move her house and change the Internet service provider, technically my server will gone, likewise, if she ever unplug her router too.

I've been questioning and thinking about the following: Why Couldn't I have my server hosted in my house? What does dependency mean in network? How much are we dependent on network? On who are we depending within our network? There are different layers on dependencies in network, how do you define that you're reliant or not in something/someone? With the Special Issue #8, I experienced self-hosted network, documented on some dependency issues, recorded my observations in my personal level with the annotated publishing tool that also has some dependency stories to tell.

Currently I'm living in the apartment owned by a housing company called Holland2Stay, mostly international expats and students stay, where everything, including a bed, a table, a sofa, drawers, dish plates, cups, wineglasses, even an iron, mini spoons are all included as a full package. Obviously Internet service was included too, and you only needed to purchase a router. It seems very convinient, however, when I tried hosting my server in the router, it never made me pleasent. The central network system where they control all the routers connected to, is prohibited me from hosting my server because I couldn't have access to the router. Eventually I can't install any other server under this network that's highly secured. The housing company(Holland2Stay) has a bigger power on the network that I can't do anything with my Internet which I pay for my own service.

As a student in Holland, you live in housing where everything is provided for you. Everything is included even Internet. So I didn't need to apply for the Internet company, but just needed to plug in my router at home. Once I had Internet connection problem, which have come from the main server of my apartment, everyone in this apartment couldn't use Internet for some periods.

Although I'm hosting my server, I feel that I have a sense of distance from my server that I don't tend to use it often for such a long time. While my classmates made use of it for saving files and images, I left my server empty for quite long time. Because I am not physically possess my sever at home nor I didn't want to bother her for asking to visit her checking my device, I tend to forget using it nor thinking of it. Moreover if she doesn't allow me to either visit her to fix my device that is connected to my server or if there is a disconnection from ethernet cable, her network will disjoin from me.

The result shows me whenever I or Biyi would visit each other's website, we will have to pass by the three routers from the aforementioned company. From this research, I convey the Traceroute is not showing us how the server is relying on something because it doesn't show the hierarchy of our network. But it gives the information such as how my server travels through the routers provided by telecommunication company.

What if one of those telecommunication companies stop their business and remove the router? Then my server can't approach to the destination unless there are still some routers provided by another company.

For me dependency is about who owns the power, and to whom it has more power to control the situation. I see the relation of a power ownership here: When visiting someone else's server, I should have some routers that is a part of a journey to the destination. Moreover I need telecommunication company, who owns the router, to make connections too. If there would be no companies, there will be routers, which means there will be no hops at all: Eventually my server wouldn't be able to travel to the destination. Each hop is a bridge between two server in our network we made, and if the bridge broke, you can't reach to the final destination unless there is an alternative bridge instead.

There are bunch of XMPP clients that are available. An XMPP clients is any software or application that enables you to connect for instant messaging with other people over the Internet. Basically it's like a platform where you open your chatting room. There are many free clients you can use to open the chatting, for many different devices and operating systems. In my case, I used an XMPP client called 'Converse'. 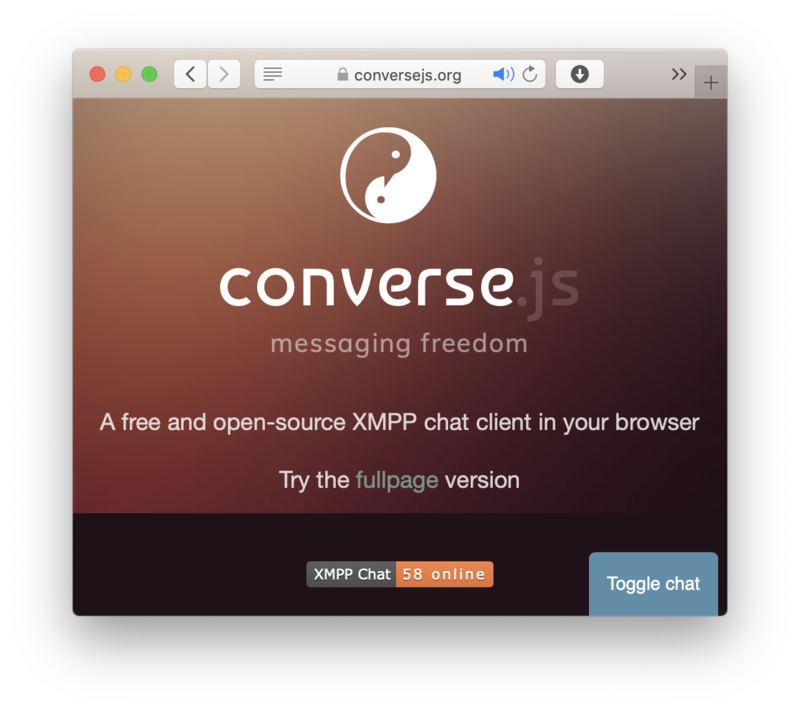 In order to use an XMPP protocol, first, you need an account to log in via client. Having your own domain name system on your server, you can create unlimited amount of account for users who shares your local area network. Or you can log in to different devices such as phone, laptop, desktop, ipad with one account. Once you're logged in, you can start creating any of channel you'd like to make, and start chatting!

Since I am a parasite on Artemis' local area network(LAN), I had no choice but to create my account from her network. Although I have my own server with the port number '4444' provided by the host, yet I am residing in her local are network. Eventually I couldn't create my own account. Again this idea of parasitization is coming back: I don't have the right to change neither my account name nor create another account.

Therefore when creating an XMPP account, I had to ask her permission again. whereas, she never asked me to get permission to do something because she didn't need to.

After receiving an account, finally creating a channel is possible. In any channel I created, I can be a host myself. However, in order to make the channel, an address of groupchat is required. For that I need an local area network address, in my case, of course: Artemis' address: please.undo.undo.it. Every step of creating my own server to XMPP account to a channel: I needed her permission.

Although an XMPP protocol is meant to be a free and open-source chat client, I can't be fully independent as a user in this protocol. From A to Z, I am fully relying on her.

Annotation Bot is an XMPP based web-publishing tool to annotate texts associated with thoughts, images, and sources. With this tool, a user can add comments or image references from any XMPP client via several digital devices. 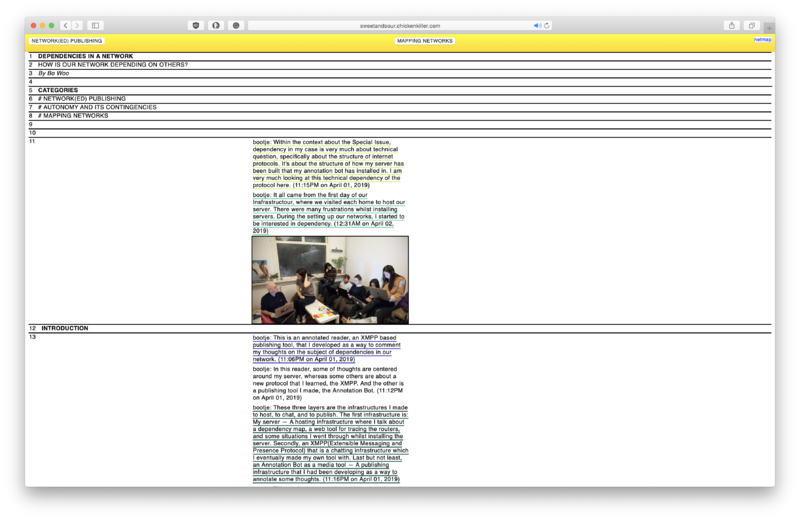