Arduino is an open source hardware and software. The software is used to transit code to the memory of the connected machine.
It provides a user friendly environment to type C code: this is possible because it doesn’t show all the processes going on in the machine. This aspect could be really helpful for beginners but it could turn turn into an obstacle :((.

Alternative method to create a sample

Then I tried to let my Arduino speak

To connect a 1.8 TFT screen with Arduino

How to wire the screen to Arduino:

Libraries to include in the code:

It is not that easy to find the right library for this kind of screens. Most of the tutorials available online suggest to include only the TFT and the SPI library but It didn’t work for me. I made some research and I found out that my particular model of screen needed the Adafruit GFX and the Adafruit ILI9341 libraries (which are the one compatible with my TFT display).

Visible Speech employs phonetic vocabularies and other oddities to visually reproduce conversations, not only as a stand alone unity but also as a part of a choral act when combined with other modules. It communicates by using constructed & non-constructed languages, human-readable and machine-readable alphabets.
Visible speech module comes from a fascination for constructed languages, phonetic translation of speech and the endless human desire to reach an ideal universal language. This leading interest has been arranged by considering the structure which sustains a module’s technical core and interface: an instrument built and programmed with its own particular kind of widespread alphabet, human developed and machine readable.

I started to research for this project by looking at the possibilities of written language as a transcription of sound. Starting by this interest I’ve focused my investigation on phonetic alphabets but also on the alternative alphabets created among the history in the attempt to create a universal vocabulary.

1. a set of symbols (such as the IPA) used for phonetic transcription;
2. any of various systems of identifying letters of the alphabet by means of code words in voice communication.
A phonetic transcription is used to display a “one to one” relationship between symbols and sound. To make it effective it is based on the assumption that all the linguistic sounds are segmentable into discrete units represented by symbols.
There are mainly three types of phonetic transcription:

Alexander Melville Bell’s Visible Speech is a particular kind of phonetic alphabet which visually represents how to physically make the sounds needed to say any word. The system was developed in 1867 by using a spectograph to translate speech into its visual representation: Bell’s original idea was to use it as a system to translate sound into something readable in the hopes to make deaf people able to receive phone calls one day.
The spectograph system could also be used to let the deaf see their speech organs while talking in order to make them able to improve their ability to speak and articulate sounds. Bell’s research revealed itself useful for later developments in the field of computer speech recognition, a field of research studying the recognition and translation of spoken languages into text by computers.

It is a constructed language conceived as an ideographic writing system by Charles K. Bliss.

characteristica universalis= 1.the ideal language, projected by Leibniz, in which logical relations would be so transparent that, when people used the language, there would be no irresoluble dispute, but only the need to ‘calculate’.
constructed language=1. a language whose phonology, grammar, and vocabulary, instead of having developed naturally, are consciously devised; 2. artificial languages, planned languages or invented languages and in some cases fictional languages.
pasigraphy= 1. a writing system where every symbol represents a concept.
lingua franca= 1.any of various languages used as common or commercial tongues among peoples of diverse speech; 2. something resembling a common language.
glossopoeia= 1. the creation of constructed languages for artistic purposes.
universal grammar(UG)= 1.theory of the genetic component of the language faculty, usually credited to Noam Chomsky.

“[…]learned men have long since thought of some kind of language or universal characteristic by which all concepts and things can be put in beautiful order.” Gottfried W. Leibniz, On the General Characteristics [1679]

During the 17th century, Gottfried W. Leibniz – the German philosopher, famed as inventor of the modern binary number system and also for his exceptional optimism - started to dream about a universal language. He was trying to create a vocabulary able to rationalise universal concepts and numbers. A similar pattern to the machine language used in today’s encoding systems based on binary arithmetics. Today, four centuries after Leibniz's utopian system was theorised, we can ask to what degree his dream has been accomplished.

Are our machines speaking the ultimate Characteristica Universalis?

Leibniz’s ideal language was conceived to be effectively expressive so as to become universal. Today, by contrast, we perhaps face the opposite condition. We can see the proliferation of too many universal languages, aiming for the same result but differing at their cores. The dream of a Characteristica Universalis seems stuck in the complexity arising from the duality of human languages and machine languages, caught between the aim for entirety and the impossibility of reducing plurality. In a similar way machine languages of today can be really far removed from the user-friendliness that Leibniz theorised: “[…] a new language or script, that could be learned in one week or two”. Unfortunately today’s scenario presents itself as radically different. While anyone can use and interact with programmed technologies, the knowledge of their language is limited to a comparatively small group of people. This language, whether it is the Characteristica Universalis we were supposed to reach, is trapped and carried by people everyday, as a blackbox filling our our rooms and pockets.

Notes 1. A constructed language is a language (also known as a conlang, glossopoeia, artificial language, auxiliary language, and ideal language) that has been consciously created by an individual or group. 2. Gottfried W. Leibniz, Letter to Johan Friedrich von Hannover [1679]. 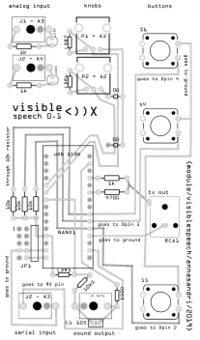 
How to build the module*

How to Connect the module*

How to interact with the module*

To convert images into HEX ( *and make a sort of animation):

1. I prepared a simple black and white image using illustrator\photoshop. I exported it as a bitmap file with a resolution compatible with the one used by the TV OUT mode (128x96px).
2. I used an online tool to convert the image into hexadecimal code. Not all of the options found in the internet are able to create an array compatible with the arduino code. These are the ones that worked better for me:

3. I added in my Arduino code folder two file extensions (.cpp & .h) copied from the DEMOPAL example. Then I replaced the code of the previous image with the one that I generated with the converter tool:
(.cpp):

Arduinos can send messages to other boards by using serial communication. It is possible to do it by connecting the required pins directly on the board. In my case I decided to test it by making an hardware adjustment on each module. I added and soldered an extra mini jack input for each of them.

How to connect it

for the sender (TX)

for the receiver (RX)

for the sender (TX)

for the receiver (RX)
I arranged the code to let the Arduino be able to output the message on the TV. It is also possible to “translate” the bytes received into HEX, BIN, DEC or OCT.