What do you want to make

My focus is on the food practices of everyday life, magnifying the often overlooked actions we take every day regarding our sustenance, and reflecting on the reasoning behind our food-related decisions (de Certeau et al., 1998).

Food is a huge part of our lives and our social interactions. This is why it's important for me to use food as a medium to discuss a broader social context. My project will take the form of a public research into specific food practices, focusing on the representation of food in tech culture. In this context, I will also focus on the political act of cooking as reclaiming independence over food production, the shift towards the removal of cooking in contemporary life, and the over-efficientization of food production and consumption. These topics will be analyzed through a series of workshops and experiments in which the participants would deconstruct the practice of cooking and discuss various procedures taken for granted, take apart the structure of a recipe and reconstruct it based on their experiences, as well as discuss the ethics and politics of food production.

Eating is primarily done to satisfy the energy needs of a living organism (de Certeau et al., 1998), but the approach in food technology reduces food and cooking to an engineering process, in which efficiency and profit is valued over pleasure and ethics. In startup culture, for instance, efficiency of the mind and body are the ultimate goal to achieve, and activities which slow people down in search of that goal need to be removed. In achieving that, cooking and eating meals have been replaced with drinking complete food liquid meals which contain all nutrients necessary for the entrepreneurial lifestyle, without the hassle of planning, prepping, chewing or cleaning. In this context, one aspect I want to look at first is the concept of collaborative cooking. The first workshop, which will be tested in the py.rate.chnic session, will look at the act of cooking together applied to two dietary variations on traditional food recipes. Participants will cook together either a vegan cake, or a liquid complete food cake (Cultofmonkey, 2015) and reflect on the experience of preparing a dish together in these altered circumstances. 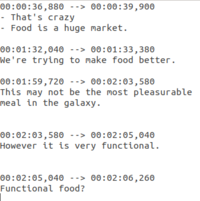 Another aspect of food that I want to focus on is the representation of cooking in tech culture. To discuss this perspective, I plan to create a media object, inspired by 'Semiotics of the Kitchen' (Rossler, 1975) which will provide me the medium to express a feminist critique to the juxtaposition between food culture and technology. In tech communities, cooking is often used as an analogy to explain other technical processes and concepts, such as programming. This is done under the assumption that everyone is accustomed to the act of cooking, and can therefore understand more complex concepts through it. Furthermore, the recipe has often been compared to the computer program, and terms such as recipe and cookbook have been appropriated. I see this as a sort of gimmick to ease people's understanding of complex issues, while diminishing the importance and complexity of the medium used for the explanation.

Looking at the language being used in tech culture, I've done some experiments with creating supercuts of YouTube videos using Videogrep based on certain words and structures. I plan to dive further into similar experiments, in the hope that the results will reveal a certain language pattern I can play with.

How do you plan to make it

I want to conceptualize and host events related to food production, reflecting on the issues mentioned above. By looking at similar events and projects, I want to compare and contrast them in terms of approach, participants and outcomes. I will create plans for each workshop idea, source ingredients, and test them together with my fellow colleagues.

I am also interviewing several people who are or have been consumers and advocates for meal replacements. I plan to document my findings, which might turn into small publications in preparation of my thesis.

At the same time, I want to reflect on my own habits around food production and consumption. For instance, in an attempt to understand the meal replacement phenomenon that has been adopted by the male tech world (Bowles, 2016), I will keep a liquid diet for as least a week, replacing two meals per day with their liquid equivalent, while keeping detailed notes of my experience. 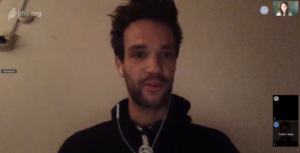 Why do you want to make it

For me, food is political - it's gendered, can be oppressive, and its infrastructures are extremely complicated. (German, 1989). Our food choices are influenced by our cultural background, class, level of privilege, education and so on (Cairns et al., 2010). Reading on food culture, food politics and other food related topics has been one of my main interests for many years, so this project comes as a natural progression. Furthermore, my recent introduction to the world of software and technology culture has opened new possibilities and insights. I want to explore the relationship between food and technology, how the principles connected to one can be transferred to another, what is lost and what is gained through the association of the two, and how one can critically inform the other.

A further point to make here is that I have come to programming and technology in general from a completely different medium. For me, it is not the end goal, but a tool I use to prove a point, or to practice a concept. Coming from a deep, lifelong interest in food culture, I find it surprising to see it now used as an 'easy way in' to tech world. I am conflicted on my position towards this path, but I am extremely interested in the critical exploration, and the social and political implications of this connection.

Who can help you and how

Talking to people who have taken time to reflect on the relationship between humans and the food they eat is the most valuable source of information. So far, Femke Snelting has been my biggest inspiration, since many of the topics I am reflecting on are part of the work she has already done in the past decade. Among her projects that inspire me are her essay on Stoemp (Snelting, 2011) and her code inspired by Isabelle Beeton's instruction book for housewives (Snelting, 2009).

Another person that I'm talking to is Marketa Dolejsova, who has done her PhD on human-food interaction and has developed a number of amazing projects. I took part in her workshop at CCU, and found that her research topics are in line with mine. I am also interviewing a number of other people who have chosen to include liquid meals in their lifestyle, in the hope I will get more insight on their motivation. What is more, I recently got involved in the planning for a potential Food Station in Willem de Kooning, a project led by Reinaart Vanhoe, a place where food workshops and events could be held. In the past couple of months my research focused on women's labour in the technology sector. More specifically, I was interested in how women were first introduced to the technological world to perform menial and basic tasks. These tasks eventually became the basis of programming today, a culture completely appropriated by men.

Similarly, food production has always been associated with women's work, done behind closed doors, with little or no attention being given to it from the outside. In time, cooking has become appropriated by a different culture, hacking culture, stripped of its emotional layer and turned into a programmatic practice (Bowles, 2016). I want to reflect on this phenomenon and come up with ways to translate my own personal involvement.

Furthermore, the disconnection between our daily food habits and the food industry has also been one of my main paths of exploration. My previous work has also involved shifting the focus from other daily activities which might seem more important, to the food consumed and the decisions leading to consumption. For instance, I created a zine based on a food diary that I kept for an entire month, in which I documented through drawing every single thing I consumed. I found it to be a very insightful experiment, since it revealed my way of capturing my own life in memory, a way that largely revolves around the food I eat. I am interested in the idea of cooking as an anticapitalist political act (Pollan, 2014) in which people can become more than simple consumers in an industry ruled by big corporations. As an opposing trend, I am also looking at the socio-economic and political neoliberal context, rising with the help of Silicon Valley, in which there has been a rise in food-like substances meant to replace real meals with nutrient-packed powders sold by startups around the world, in yet another expression of techno-solutionism. From my research, I have found out that food innovations have, in general, made people more aware of the food they consume. This is, for me, enough reason to give proper attention to emerging food trends that appeal to our contemporaries, however outrageous they might seem.

For a complete bibliography, head over here.