The Language of Images 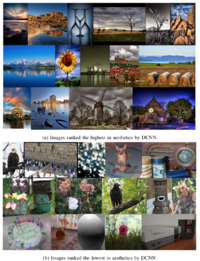 So what does aesthetic mean for an algorithm? Is it just categorisation? Therefore: what is in the dataset? -> making art that pleases the machine -> how can the algorithm be convinced by art? (new criteria for aesthetic)

(Is it augmented reality if what we see is not real? Maybe it is more intervened reality)

what happens without training? → direct visualisation of the algorithms (the algorithm is the art)

also interesting with their stamp on it

From the database the computer is being trained. While feeding these datasets into huge models we lose sight of it's connections, that make sense for only the computer now on. A model that tries to describe reality in order to generate, to analyze or predict.

I want to put a special focus on generative models and discriminative models of the world.

While these models simplify reality by trying to calculate probabilities and reduce to features, in the same time it makes reality more complicated. These computed models are black boxes. Mostly it is even impossible to see the data it is being trained on.

From features to reduced reality

So an image is being reduced to its most contrasting points, to its pixels that hold a certain array of color values. But what is it that makes an image? If I was to describe an image, I wouln't say: Oh, there is some contrast going on in the left corner, lots of brightness in the middle and

A sentence is being reduced to its words and connections. But can we describe the value of a sentence by only this features?

It becomes even weirder when we look at algorithms that create models by learning from themselves. So we do not only encounter the problem of creating an abstract model, even the database, that otherwise enables us to gather insights on why models act how they act, is incomplete.

How models are built

Models turn chaos into sense (for a machine)

Bending the model - an experimental approach in understanding

> what can we learn from that different view on reality?

How can we bring models to fail or to its limits, how can you abuse them?

Errors in images > what do they mean?

Main question: what makes these aesthetics so different from

What is new and what is old?

How does machine learning change the generation of form and image. What are the implications on culture and art production through those generated forms. Side question: what makes these new aesthetics so different from the old?

Relation to Production of Art and generation through algorithm. (Walter Benjamin -> from mechanical reproduction to digital production. Art is not only reproduced by machines but it is purely produced by them)

What is visible / invisible for machines / humans.

Making visible as form of understanding.

Error images as understanding, when you cant see the model anymore.

ml on any device

neural network that guesses, and tries to learn but doesn’t quite succeed.

Text to image: generate random sentences and apply to network (see which images result from it)