This synopsis is a personal approach on the text, because everyone has a different take and option on it. I write some pieces out of the text combine with some notes during class, and end it with a take on my three objects (or things).

What is perceived and what is ‘real’?

Heidegger thought you could get a handle on Being by approaching it though the Nothing. That ‘Thingly’ meeting of absence and presence conditions, and is prior to, all our relations to it as an object. In that sense, our subjective experience of things could be compared to our subjective experience of time, which is a continuous unfolding of presence framed the absences of past and present. This abstract thinking of Heidegger clearly commits himself to a concern for essences, and that’s way he choice a handcraft pot as his example; the jug.

Short distance is not in itself nearness, nor is great distance remoteness. What is nearness if it is even repelled by the restless abolition of distance? No relation of far and closeness. Film and TV are short-cuts to get somewhere. There is no nearness/closeness or intimacy. Technology is destroying the distances, it’s already local. To know the intimacy, you have to know distance. Everything gets lumped together into uniform distancelessness.

The terrifying is unsettling; it places everything outside its own nature. What is this unsettling and desettling? It shows itself and hides itself in the way in which everything presence, namely, in the fact that despite all conquest of distance the nearness of things remains absent. Near to us are what usually call things, close to intimacy.

What is the jug? We say: a vessel, something of the kinds that holds something else within it. We have never thought of things around us like that. The way how we live. As the self-supporting independence of something independent, the jug differs from the object. And independent, self-supporting thing may become an object if we place it before us, whether in immediate perception or by bringing it to mind in a recollective representation. However the Thingly character of the thing does not consist in its being a represented object, nor can it be defined in any way in terms of the objectness the over-againstness, of the object. But what does it means to say that the container stands on its own? Does the vessel’s self-support alone define the jug as a thing?

May be the way it brought to stand. The process of setting, of setting forth, namely, by producing the jug. The craftsmanship? What exist by such producing is what stands on its own, is self-supporting. When we take the jug as a made vessel, then surely we are apprehending it – so it seems – as a thing and never as a mere object. but in truth we are thinking of this self-support in terms of the making process. Self-support is what the making aims at. But even so, the self-support is all thought of the terms of objectness, even though the overagainstness (beingness) of what had been put forth is no longer grounded in mere representation in the mere putting it before our minds. We shall not reach the thing in itself until our thinking has first reached the thing as a thing.

The making, it is true, lets the jug come into its own. But that which in the jug’s nature is its own is never brought about by its making. Now released from the making process, the self-supporting jug has to gather itself for the task of containing. The maker knows the outgrowth appearance. But what shows itself here, the aspect, characterizes the jug solely in the respect in which the vessel stands over against the make as something to be made. But what the vessel of this aspect has this jug, what and how the jug is as this jug-thing, is something we can never learn – let alone thing properly – by looking at the outward appearance, the idea (Plato). You have to know the idea to become a thing. The thing has to define the idea, the concept. Instead of ‘object’ – as that which stand before, over against, opposite us – we use the more precise expression “what stands forth”.

We become aware of the vessel’s holding nature when we fill the jug. The jug’s bottom and sides obviously take on the task of holding. What is impermeable is not yet what does the holding. When we fill the jug, the pouring that fills it flows into the empty jug. The emptiness, the void, is what does the vessel’s holding. The empty space, this nothing of the jug, is what the jug is as the holding vessel.

It’s the making, the solidness, the idea? Not what a does and doesn’t? Heidegger is looking at what the medium does not. What is nothing? The thing holds emptiness, is this the function of the vessel, the jug?

The vessel’s thingness does not lie at all in the material of which it consist, but in the void that holds, the emptiness.

The thing is more a sculpture, self-sustained, independent- dependent, could be crafted, to a self-supporting-process.

The craftsmanship and the industrial is never a clear cut between them, so therefor hard to define.

Heidegger sees it in a negative to define the object. Like the emptiness of the vessel/jug.

Heidegger goes against his theory by placing it in a book, and using a vessel image.

But does a thing still exist? Nothing is near, or local, or handmade. And what about “what stands forth”, because when we think about it, it becomes an object? to the moment of thinking and perception you think about an object not a thing. Everything disappears (Baudrillard), everything is a reproduction.

So there for everything can be a media object? 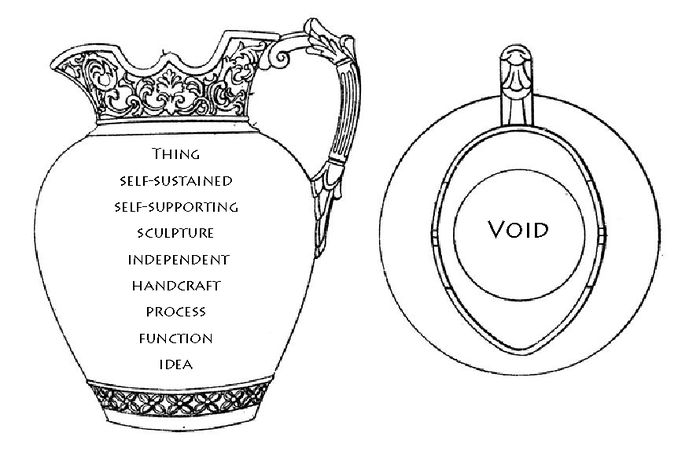 Charlie Hebdo - Because it’s a collectable, it is maybe a thing? But it is a reproduction, there are many of them it’s a object.

Internet Memes - Meme is something digital but can still be an object. The photos are a representation and is can me mass reproduced.

Wifi Symbol - I want to approach the symbol in a historical context. What makes is an object, I don’t know yet.