Being a terrorist: Video game simulations of the other side of the War on Terror By Marcus Schulzke

Marcus Schulzke analyzes videogames that allow players to have the uncommon option of playing as a terrorist. While most videogames cast the terrorist as the enemy as a quickly understood villain, some games allow for the more problematic option to step into the shoes of terrorists. Schulzke theorizes that these games have enormous theoretical potential to allow players to experience the subjective perspective of terrorists that are normally understood to be natural villains. This would allow the player to question terrorist motives, including those motives that have been unfairly characterized as terroristic. More importantly, it problematizes the traditional narrative of the War on Terror, which reduces complex political motivations to a simple binary of good versus evil. However, videogames have completely failed to offer any change in perspective. In fact, they ideologically reinforce the traditional narrative by hiding terrorist’s subjectivity while creating the illusion that they have provided for its accurate representation.

Schulzke analyzes the games America’s Army, Modern Warfare 2, and Medal of Honor: Warfighter, which allow the player to step into the terrorist’s shoes. While these games differ in how they choose to structure that experience, they all share a fundamental flaw in their failure to provide a meaningful change in players’ perspective. Instead, these games purport to offer players a new subjective experience without providing for any challenge to the player’s established perspective.

The flaw begins at the design-level: video games invest heavily on visual realism. Slick graphics and accurate combat are the focus of game developers, who are further advised by Western war veterans providing a Western point-of-view of warfare. This “realism” masks the fact that no sincere attempt has been made to represent opposing subjective realities of the enemies of the War on Terror. Furthermore, casting terrorists as the default enemy provides game designers with an archetypal villain. Fewer steps need to be taken by designers to justify the violent killing of an enemy by the player if that enemy is understood to be intrinsically evil. In that sense, videogames set themselves up for the failure of any meaningful challenge to the gamer’s perspective by reinforcing the Otherness of the enemy. Videogames ultimately reinforce the media narrative that ignore any possible motivations or underlying ideologies behind terrorism (leading to their false identification with religion and ethnicity).

Schulzke is not arguing in support of terrorism, he is interested in understanding them. The War on Terror narrative has led to a gross simplification of geopolitics based on ignorance of the enemy and has led to an unsuccessful fight against real terror. Because videogames allow for the merging of spectatorship and participation, they provide a phenomenologically unique experience for players to access the Other’s subjectivity. However, the following examples show how videogames make a false claim to subjective experience.

America’s Army: This game takes the player from bootcamp into battle as an American soldier. In multiplayer mode, players are divided into American soldiers and terrorists. The game, however, only allows players to see themselves as American soldiers. Every player sees themselves as an American, even though their online opponents see them as a terrorist. In effect, the game identifies the American army as the ‘good guys’ and does not permit for any change in perspective; a radical approach given that traditionally, multiplayer games allow you to choose which side you fight for. Since players understand that opposing players see them as terrorists, the game unintentionally turns every player into a terrorist. But rather than provided valuable insight, the games suggests the only difference between American and terrorist is a matter of perspective reinforcing the cliché that one person’s terrorist is another’s freedom fighter. In America’s Army being a terrorist is nothing more than being identified as such by the opponent.

Modern Warfare 2: This game includes a stage that puts the player alongside terrorists shooting crowds of innocent people in a Russian airport. The player has the option to join in the killing, or watch passively. The mission fails if they try to prevent the massacre. This segment of the game has been noted for its incredibly graphic depiction of violence, and the realistic portrayal of the innocent victims (their screaming, cowering, pleading, etc.). While one can be tempted to argue that the accurate depiction of terroristic violence brings the player closer to stepping into the terrorist’s point of view, the player is in fact taking on the role of a secret agent fighting terrorism, nullifying any actual change in player perspective. By creating distance between the player’s motivation as a CIA agent and the accompanying terrorists, the game only serves to further reinforce the terrorist stereotype as morally evil individuals exacting meaningless violence upon innocent people. 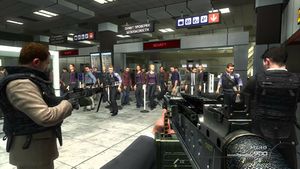 Medal of Honour: Warfighter: Similar to MW2, the game allows for a player to step into the role of a secret agent posing as a terrorist. However, filmed sequences in the game suggest that the agent may have in fact defected, making his participation in terrorism sincere. The stage where the player can control the seemingly ambivalent agent is restricted to a training exercise in Yemen with no simulated combat. MoH seems sincerer in its attempt to shift perspective; the level’s title is “Through the Eyes of Evil”. However, the use of the label “Evil” once again reduces the terrorists to a simple good vs evil binary. Given that the training exercise (that allows for the player to familiarize themselves with the controls) is essentially identical to other training exercises in FPS games, the game suggests that the only difference between good and evil is the cause for which you fight for. In this case, the agent is exhorted in the training mission to kill Americans, making him evil. In this level, players learn nothing about terrorists’ point of view; the same terrorists that they later fight in other stages of the game. Nevertheless, upon completion of the training exercise players are awarded a “Know Thy Enemy” distinction, despite having learned nothing of the enemy, other than they are evil. 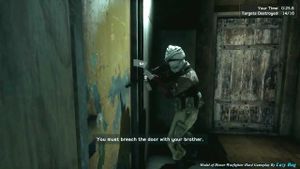 Videogames play an important role as media in the shaping of the public’s understanding of the War on Terror. Their use of simplistic narratives fails to challenge dominant narratives. While their design seemingly allows for players to have their understanding of the Other challenged or expanded by stepping into their shoes, the games discussed above illustrate that they fail to provide any new information and only reinforce established stereotypes of evil. Currently, videogames only further conceal any real motivations terrorists may have and create a false illusion of new perspectives.