My work explores emerging realities produced by new technologies, online communities, and the digital image. I often work with found images and videos, attempting to understand and make sense of our contemporary visual culture, using video and moving images. Rather than the artistic production of new images, my concern is with the interpretation and manipulation of pre-existing visual languages. In the context of my Masters, I have chosen to structure my methodology using technical exercises to develop formal skills that in turn inform a complete work. Works themselves often apply collage, digital manipulation, and editing to existing images and video. In parallel, I am developing written research informed by my own works as well as academic and artistic works of others. My current artistic research explores the political implications of image-based cultures. 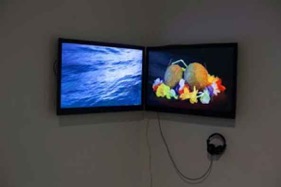 My working method uses a series of monthly exercises designed to inform larger, ongoing artistic work. These exercises combine prototyping, writing from RW&RM, and research. Whereas the courses in the Masters program set out a methodological approach and routine for our personal practice, these exercises attempt to bring the strands of these courses together to realize a complete work. As a goal, they help me develop a general methodology of cycling through all the steps in the creative process, including research and writing, quick prototyping, and the translation of research into work. As exercises, I am not concerned with their "exhibition quality"; they allow me to quickly execute a work within my ongoing research, and to develop technical, writing and presentation skills. It has been an effective way of quickly articulating ideas based on long-term research. To date, exercises include: Error View, While you were sleeping, Vanitech, Toward an argument for visibility, Nikinta, Casket, and On Holiday. 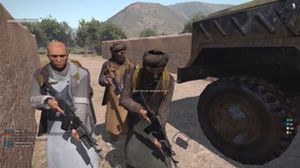 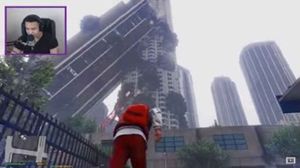 In my first trimester's work, Aim Down Sights, I took video-game footage uploaded by gamers in which they re-enact terrorism, both as victim and as terrorist, to create a short video that explores roleplaying, the dedication to and justification of these online identities, and the ultimate blurring of realities. The work continues my previous research interests, exploring how the experience of an online, image-based reality can affect personal identities and even our perception of our concrete world. As posed by Scott Contreras-Koterbay and Łukasz Mirochain in The New Aesthetic and Art: Constellations of the Postdigital, I am interested in how the digitalization of the world as it appears in a digital format affects our aesthetic perceptions of such appearances (Contreras-Koterby, Mirochain, 2016). Furthermore, can our own digitally-informed realities exist on the same epistemological plane as our concrete reality? By taking video clips of gamers roleplaying terrorism, paired with their verbal justification of their activities, I wanted to explore the inherent tension between the accepted (hyper)reality of gaming and the taboo of terrorism. These clips are interspersed with real-world footage that tie the gamer's re-enactments to real-world events. Through this editing process, I also wanted to blur the distinction between the real and the simulated, juxtaposing footage that could not easily be identified as real or digital.

The research associated with Aim Down Sights culminated in an essay, The Simulated Real: Aesthetics and the Semblance of the Real in Terroristic Images. Here, I call into question the association of the Lacanian Real with the terroristic image, as previously argued by Slavoj Žižek (Žižek, 2002) and Boris Groys (Groys, 2006; Groys, 2007). I further explore the notions of desire for the real and semblance of the real within terrorist gameplay where videogames become a liminal state of complicity between a detached spectatorship of hyper-real aesthetics and a subjective experience of the semblance of the real. At stake is the significance of terroristic images in our society, and their ontology as digital visualities. The text further draws from the artistic works of Adam Curtis, Elisa Khoury, Rabih Mroue, and Sean Snyder.

My second trimester's work in progress, Of Roland, arises directly from my first trimester's research. Following the argument that the recreation of terrorist images in the West continues the historical practice of Orientalism as argued by Edward Said (Said, 1978) insofar as it continues the misrepresentation and mystification of MENA nations as the Other. I take up the 11th Century epic poem (chanson de geste) The Song of Roland as one of the founding texts of Orientalism for the West, looking at the final lines of the poem where the poem's hero Charlemagne is called to the defense of King Vivien at the city of Imphe against the Muslims. This historically forgotten or even fictional city becomes a real place for me, where I reconstruct it as a site of alternative history, a timeless, non-physical meeting point where East and West converge, where the boundaries of the self and Other blur, and from which new image-objects that reject Orientalism emerge. The work itself applies an archeological method using excavation as well as the revealing of layers as per Foucault's use of the term archeology (Foucault, 1972). I am currently exploring the creation of digital archeological objects from Imphe. These objects are at once convincing in their hyperreality and impossible in the alternate history they embody. These digital objects are further accompanied by images of collaged reconstructions of real and hypothetical archeological sites. This work draws from other artists who reconstruct historical objects as digital objects including Cihad Caner and Rob Dickinson. As a work that applies archeology as a method, it further draws from artists who have applied archeology including Marc Dion and Bettina Hutschek. A parallel work will examine and classic Orientalist narrative through a physical recreation of Charlemagne's desk that combines postcards from Roland, mailed from historical sites associated with Orientalism, images of historical European leaders that "inherit" Charlemagne's mandate, works of foundational Western literature of MENA providence, and an aural reading of the final laisse of The Song of Roland. This artistic approach offers a visual representation of the history of Orientalism (beyond its association with the 19th Century artistic genre) in tension with the European cultural inheritance of a non-European origin.

The use of exercises has helped me understand my own interest in interpreting images rather than generating images. The application of research to my artistic practice has also helped me develop a practice that begins with generative research questions, where the production of artistic work can be understood as a form of knowledge production. Moving into the next trimester, I hope to incorporate an increasingly collaborative and interdisciplinary approach. I am particularly interested in interdisciplinary approaches that can expand artistic knowledge contributions beyond the art discipline. Similarly, I am interested in collaborative approaches to create larger-scale work. 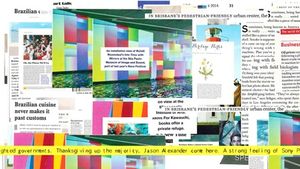 My previous work often paired new and old technology, new and old material (the oscillation between opposing values) to explore the resulting visual and emotional fragmentation. Conceptually, it was concerned with blurring the boundary between the digital, immaterial world and natural three-dimensional space. Some artists who exemplify this work include Matheiu Trembling and Aram Bratholl. Drawing from Artie Vierkant and other post-internet artists' rejection of representational fixity, where the image after the internet can have no original copy, I sought to translate and transcode information from one media to another to create work that exists in a state of displacement and in multiple contexts. Recent examples include the single-channel video work ReSource, which uses pages from recycled magazines as its source material. New sentences, poetry and narratives are formed from the magazine's text and projected over the original pages using a Markov text generator. 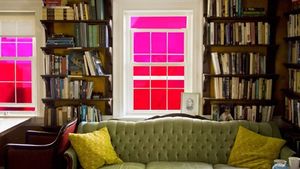 Similarly, Error View, explored the translation of landscapes into new abstract digital images. The work is composed of a series of photographs of interior rooms, where digital landscapes of glitched images replace outdoor scenery. Photographs of outdoor sceneries (flowers, trees, lakes, landscapes) were run through an online glitch tool that corrupts some bytes in each image. Because of the way JPEG encoding works, the corrupted file still shows a corrupted image. These corrupted images were turned into looping videos by scrambling the bytes of the images, then loading it back into the browser.

During the Masters, my research has taken the blurring of the digital and the real in contemporary society as a given, and is turning toward an emphasis on the inherent tensions between digital media's method of production and our visual understanding and acceptance of it. In this sense, I'm interested how multiple realities come into being through the digital image, or, as Oliver Laric states in his video work Versions, how the multiverse is enacted through the digital image and popular meme, and our particular preference for the permutation rather than the original. Korakrit Arunanondchai similarly suggests in Natural Gods that the digital uploading of consciousness could allow for all conceivable permutations of reality to occur. Nevertheless, I have found that my work has maintained a consistent line of inquiry examining our participation in the creation of extended and new realities through digital media.

In my thesis research, I will continue to examine how the digital sphere expands individual ontologies. I am particularly interested in examining how digital objects and avatars (as non-real objects/persons) are invested with political power. I'm interested in pursuing artistic strategies that enact their own propositions rather than merely representing them. Stephen Wright calls these 1:1 practices that are "both what they are, and propositions of what they are" as a mode of action to overcome processes of representation that obstruct our direct engagement with the world (Write, 2013, p. 276). I am interested in this as a strategy of dissemination and knowledge production that moves beyond the gallery. I am further interested in examining their potential to be used for socially engaged work including the re-appropriation of public space, the decentralization political activity, and the subversion of capital-driven markets. This strategy has of course been criticized for jeapordizing the principle of the autonomy of art, but even art's autonomy as a question interests me. Some examples include the work of Jonas Staal, Yael Bartana and Christoph Schlingensief.

I am similarly interested in the works of artists who engage in the creation of alternative narratives and fake news, explicitly presented to an audience as fact. Having received several labels including Parafiction (Lambert-Beatty, 2009) and Overidentification (BAVO, 2007), these practices attempt to intervene in public discourse often through direct participation and by introducing fiction experienced as fact. As fictions experienced as fact, they leverage how belief operates on the audience; as believed fictions they produce something rather than just describing it. This in turn is problematic given the current condition of fake-news, alternative facts and post-truth, and whether it is appropriate for artists to contribute to misinformation, regardless of intentions. Can fake news and post-truth be used by artists as effective strategies for knowledge production or activism? Examples include the work of the Yes Men, Michael Blum, and the Atlas Group.

Contreras-Koterbay, S. and Mirocha, L. (2016) The New Aesthetic and Art: Constellations of the Postdigital. Amsterdam: Institute of Network Cultures.

Foucault, M. (1972) The Archeology of Knowledge and the Discourse on Language. New York: Pantheon Books.

Wright, S (2013) Toward a Lexicon of Usership. In: Hlavajova, M; Hoskote, R. (eds). Future Publics (The Rest Can and Should Be Done by the People): A Critical Reader in Contemporary Art. Amsterdam: BAK.