From September 20, 2020 to October 19, 2020, I participated in a daily video messaging exchange with Lapdiang. Every day, we sent each other 5 second videos and became barometers of each other’s rngiew. When taking rngiew as judgement, the person being judged can have a solid, eh, rngiew or a soft, jem, rngiew. A solid rngiew can mean you emit, manifest, or invite good fortune. The opposite, a soft rngiew, can mean you emit, manifest, or invite misfortune. Lapdiang’s video clip would arrive as a phone message and I would respond in Khasi with an audio recording, “I think your rngiew is solid today.” She would do the same.

Parallel to the exchange, at the end of each day, I would generate a 1000x1000 pixel image with computer code in the Processing development environment. This coding would first begin in poetry that loosely translated how I felt about that day. Then I would think of a way in which this snippet of word could be a digital image, like painting or mark making but with a line of code. The code would generate abstract geometric shapes. 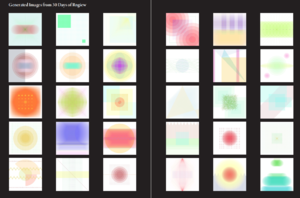 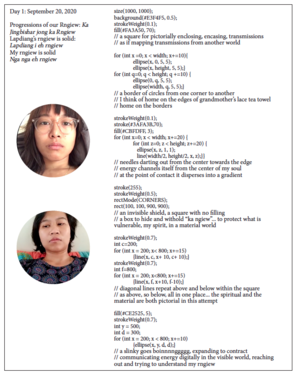 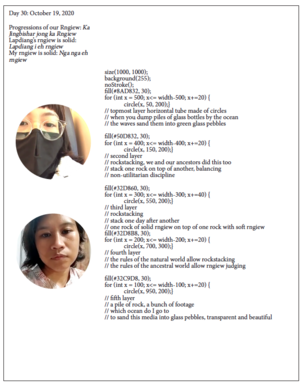 logline to film essay to be released September, 4, 2021

Through voiceover, the narrator attempts to define her indigenous identity as image, place, feeling and belonging. Using the POV of the camera, the narrator traces her relationship to the moving image presented, beginning in figurative representation, getting lost in the abstraction of maps, finding an abstract sense of shared kinship and feeling, then finally the land itself as a marker of her own history.