What is a bit?

A little segue into the Binary...

Ultimately the thing about the digital is that it's a kind of "universal" writing system of recording things as on/off 1/0 bit patterns. These patterns then always need to be interpreted by the tools and algorithms of software to actually be presented (or mis-presented).

Formats that are more "raw" (like uncompressed formats) tend to produce more interesting results from mis-interpreation (ie the patterns of a raw audio square wave can still be legible when "mis-interpreted" as an image file in a program like the GIMP). The bits of a compressed format like a JPEG or MP3 is more "brittle" in that they are more determined by the layers of treatment of the compression algorithms and may as a result be less predictable when disrupted by being manipulated. Glitch art practices often work with exploring these possibilities.

The simple act of opening an audio file in a text editor (or the reverse of opening a text as a digital audio) raises many questions. What exactly is a digital representation of a text, or a sound. The fact that once digital, bits can be as easily interpreted as text or as sound, or image, or other kind of data is at once fascinating, but also deceptively reinforces an idea of multimedia as inherantly bridging and mixing together media. Media formats, and their underlying digital representations, are highly specialized codes (algorithmic, legal) involved in the related processes of encoding and decoding.

A bit shift is the process by which the bits of some data value are shifted in position either "left" or "right" (that is away from or towards the "least significant" bit position). In a simple numerical representation of integers such a shift corresponds to multiplication and division by a power of two. This as a result of the design and working of the system of binary representation, with each column defined to represent powers of 2. The same operation performed on the characters of a text represented as ASCII code values would produce a much different result as the system of representation is structured very differently (with groupings of characters organized not so much by numeric relations, but by clusters of associated symbols and the conventions of the alphabet).

We can use python to generate the "raw" bits of say an audio waveform or a bitmap image. Certain formats, such as audio WAV files or bitmap formats like TGA and BMP (when uncompressed) are easy to generate and manipulate with generic tools like python because the formats are often mostly "raw" sample or pixel data with a short preceding "header" that declares some key properties about the file (such as sampling rate, or image size).

RAW Audio is an audio file format for storing uncompressed audio in raw form. Comparable to WAV or AIFF in size, RAW Audio file does not include any header information (sampling rate, bit depth, endian, or number of channels)

convert an mp3 to raw

Find out the properties of the audio file with ffmpeg

Sox has no handler for mp3 formate, hence you have need to convert from mp3 to wav, ffmpeg does it quickly and well

play (sox): play back the raw file at same bit-rate and sample-rate

Same thing but with aplay:

copy the image to another file, with the extension raw

play: use sox previously use command to play that audio

play: without having to declare any parameters

Raw: This is the simplest of all ways to store images, just as "raw" bytes. For example one byte per pixel for grey scale or 3 bytes per pixel for RGB colour. There is no standard header and so even the size of the image needs to be specified for programs that might read the image. [1]

Imagemagick can convert a bit-map file to a raw .dat – a not specific file type

And, it can also convert the .dat back into a bit-map

If you stick to the size, bit-depth and color profile of the original, the conversion will "preserve" the original

If you change those parameters, it is likely that the resulting bitmap will be something else!

What we are doing here is, not unlike playing back audio files at bit-rate and sample-rates, different from the ones they were encoded in.

or even an animated gif

What gets lost in a conversion ??

With a small amount of code, it's easy to dump out a stream of data as bytes:

The "wb" option in the open command means that we want to "write" "binary" data (the default behaviour of read would be to read a text file).

When you run the script:

We can then use an image application like the GIMP to interpret this raw data as an image... In this case we tell the GIMP that it should interpret the bytes as being RGBA formatted pixels in the size 10 x 10:

It then interprets the numbers as a stream of pixels in the form:

So for the code above: 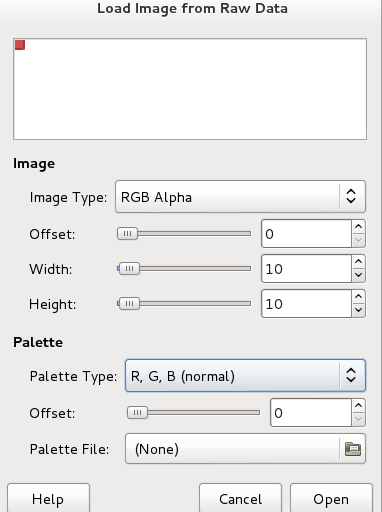 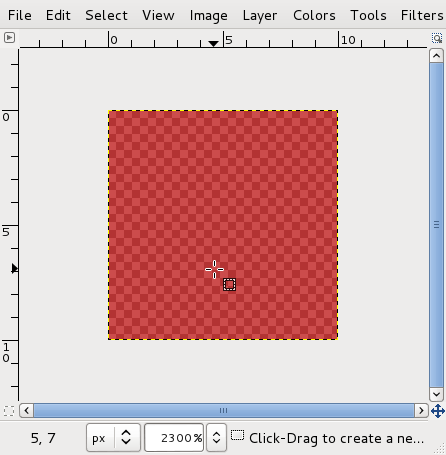 The result is an image 10 pixels wide by 10 pixels tall, where every pixel is red with 50% transparency.

Put a header on it

Working with raw data file can be inconvenient however since everytime you want to view the data as an image, you need to explicitly tell an application (such as GIMP) what the size and format of the image is. We can improve the situation by attaching preceding the raw data with a simple "header" to and follow the guidelines (which specify the order of the bytes) of a specific simple image format.

Targa is an early very simple format for images. It comes from an early manufacturer of video display cards, named Targa, who created a minimal format for files to display on their hardware. The format is still popular today in Game development and other communities for whom the simplicity of the format is useful for "wrapping" raw image data with a header so that it's self-contained and directly loadable by different programs without needing to explicitly specify information width and height and bit depth.

This script outputs a TGA format, which has been opened in the GIMP and exported to PNG A Cartesian coordinate system is a coordinate system that specifies each point uniquely in a plane by a pair of numerical coordinates, which are the signed distances from the point to two fixed perpendicular directed lines, measured in the same unit of length. Each reference line is called a coordinate axis or just axis of the system, and the point where they meet is its origin, usually at ordered pair (0, 0). The coordinates can also be defined as the positions of the perpendicular projections of the point onto the two axes, expressed as signed distances from the origin.

Select either to work with Image or Sound.

Use (nested) loops in Python to produce beautiful digital media exploring the bit. 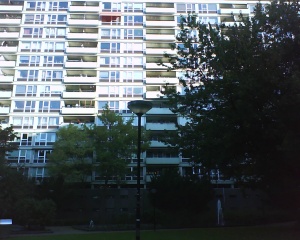