"The birth of choreography resulted from a moment of crisis,a moment of loss, of disappearance, of death of both the dance and its dancer(...)Choreography attempted to deal and barrish the final absence." Gerald Sigmund

The speech disappears as a choreographic score is being explained: https://vimeo.com/125775432

And a short visual for a study on the materiality of notation systems, symbolic representation as alphanumeric characters that serve performance as much as survives without it. The choreographic score as an independent motor of dance practice: https://vimeo.com/131286595

Voice and Choreography from Yvonne Rainer

"Ultimately what results from this is the tense relationship between choreography as an abstract notation in a relational code on the one hand, and dancing body on the other. There is nothing corporeal in chroreography. It is a substrata of a social order, which it simultaneously produces and represents . Thus it is just relation: relation of the signs to another and to the body, which they nevertheless have to exclude. Choreography is an inhuman machine that guides and produces the body without ever being able to assimilate it." - Gerald Sigmund

I gave my dancers ‘ and myself ‘ the following general instruction: “Take an equation, solve it; take the result and fold it back into the equation and then solve it again. Keep doing this a million times.

Where I’d start is with the score. What’s been missing so far is an intelligent kind of notation, one that would let us generate dances from a vast number of varied inputs. Not traditional notation, but a new kind mediated by the computer.” 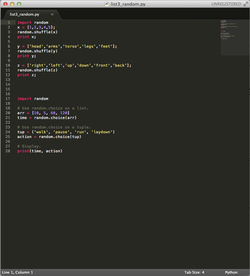 "Forsythe’s choreographic methods are frequently based on successive procedural translations of movement, a concept rooted in his re-viewing of classical ballet steps as sets of codified movement tasks and their subdivisions. In these translations, which Forsythe has referred to as “algorithms,” individual or multiple procedural constraints offer potential movement parameters and allow performers to develop complex improvisational modalities. Key examples include adding improvisational tasks or movement patterns to extant material, extracting or extrapolating individual constraints, splitting group improvisations apart into solos, and “crashing” together different movement structures. These operations result in profusions of new physical states, forms, and dynamics that serve Forsythe as resources for composing new pieces. Over time, works and sections of works develop reflexive physical- cognitive histories, to which the ensemble returns as they revise the composition of the choreographies produced." 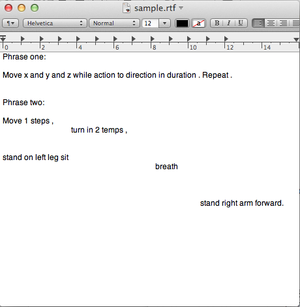 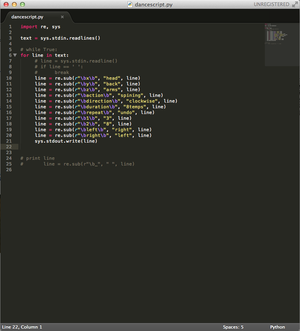 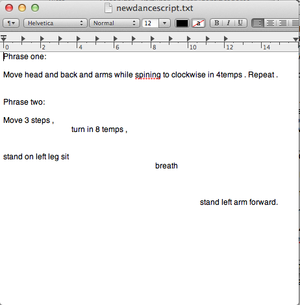 "Linguistics differentiate the syntagmatic dimension of a sentence from the paradigmatic aspect. The syntagmatic dimension (AND) is the possibility of associating more and more words in a grammatically correct sentence. (…) The number of elements tied together increases, and nevertheless is still meaningful. The paradigmatic dimension (OR) is the possibility, in a sentence of a given length, of substituting a word for another while still maintaining a grammatically correct sentence (shifting to another matter).

Linguistics claim that these two dimensions allow them to describe the system of any language (powerful means of describing a dynamic of an artifact)."

(on Marcel Broodthaers "variant" on Mallarmé's poem): "the verse itself becomes layered into the movement of its own vanishing horizon, with each of its words consigned to the bottom of a signle page (...) the poem itself made radically spatial by the irregularity and dispersal of its lines on every page, sometimes even running across the gutter of the book, to transform the verses into somehing like an image."

"What we are offered in its place is the experience of a passage between several surfaces, in a layering that draws an analogy between the stacked pages of a book and the additive condition of even the most monochrome of canavases, which, however objectified it might be, must notheless apply paint over its underlying support. Indeed, as the book's "pages" unfurl, this voyage appears to be one of a search for the work's "origin" being suspened equally between the mteriaity of the work's canvas flatbed (the modernity "origin") and the image projected on that opaque surface as the index of the viewer's originating desire to open up any given moment of experience to something beyond itself ("reality as origin"). In both encompassing and enacting such desire, fiction is then, the acknowledgment of this ver incompleteness. (...) It is the impossible attempt to transform sucession into stasis, or a chain of parts into a whole." 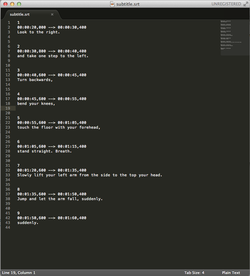 "the satisfaction of watching a composition materialize according to an indissoluble unity of intent and action: the body’s vocabulary as a movement language." - http://www.walkerart.org/magazine/2014/susan-rosenberg-trisha-brown (this video of mine is not online.)

A reflection on the different criteria for composing movement, while exploring both the physicality of the body and software programs, an inspired by the idea of a “perfect dance machine” from Trisha Brown:

>A choreographic score focussing on the timing of steps while turning; followed by a post video editing which enhanced the repetition condensation and expansion of movement in space. The repetition, a major compositional element, is also intensified in the video: https://vimeo.com/131286594/

> Movement in juxtaposition, from beginning to end and vice-versa and simultaneously: https://vimeo.com/131111889 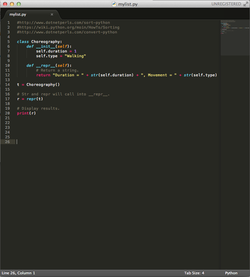 2. Trisha Brown: "She mapped paragraphs of texts into their elemental parts according to various rule sets and structures, as if trying to establish or break some code (fig. 20). As such, these drawings feel related to Alighiero Boetti’s Biro pictures (1970–1988) (fig. 22), for which the artist deconstructed words and phrases along a letter-based alphabet register to one side, with the words spelled out in space like a musical score, demarcated by commas in their given alphabetic register. What Brown describes as “a traveling phrase” that unfurls itself in multiple directions."

"semiotician J. L. Austin, whose influential text How to Do Things with Words, published in 1962, proposed the concept of the “performative utterance,” a form of speech in which words enact rather than describe; Austin coined the term performative in order to point to the actlike character of language. In other words, under certain conditions signs can produce reality; one can do things with words. Although Austin had originally planned to isolate certain utterances under the notion of the performative, he soon understood that a clear-cut distinction between a constative (reality-describing) and a performative (reality-producing) way of speaking could not be made. If every utterance contains both constative and performative aspects, it is tautological to speak about “performative language.” And the same principle applies to artworks. It makes little sense to speak of a performative artwork because every artwork has a reality-producing dimension.

"The arts, at its core, bypasses this translation from worldly experience of materiality to symbolic representation as alphanumeric characters. The arts is largely concerned with the way objects, forms, materials, and bodily actions can mean. The arts focus on immediate sensorial experience, unmediated by alphanumeric translation. I make this generalization quite aware that it is full of holes, but I make it in order to set such practices in stark contrast to alphanumeric practices of alphanumeric abstraction, and specifically to the act of coding and the functioning of code as an alphanumeric machine (...) The rationalism of the academy is characterized by the valorization of symbolic forms of representation: textuality, logico-mathematical symbol systems, and symbolic representation more generally. Computer code is entirely consistent with this environment. (The paradox of code is that it implements and reifies academic textuality as an operational machine). (...) The drive toward abstraction and generality came into computer science from the mathematical side. Abstraction is beguiling in its promise of transcendent clarity. Abstraction affords a certain kind of power, yet it also forgoes any power that specificity and the particular can bring. As Wendy Chun notes, ‘Programming languages inscribe the absence of both the programmer and the machine in its so-called writing’ (Chun)." at http://eleven.fibreculturejournal.org/fcj-072-experience-and-abstraction-the-arts-and-the-logic-of-machines/ 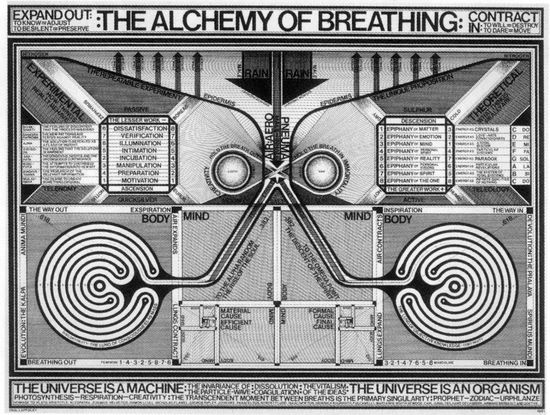