The following lines are extracts from my thesis:
http://pzwart3.wdka.hro.nl/mediawiki/images/1/1e/NHametnerThesis.pdf

This project started with my intention to observe how the digital video image behaves at the border of visibility compared to the long exposures of analogue photography. The discovery of digital noise raised questions about the construction of the video image and the constitution of the image's matter. I quickly realised that I was not interested in the moving image in the classical sense. I was more intrigued by its mechanisms: the idea that through constant movement, the image is never present as a whole and, therefore, endlessly split into fragments. It was this volatility that attracted me in the first place. The focus on video gave me a better understanding of my previous works and allowed me to see a constant theme resonating through my research: the ungraspability of an image. 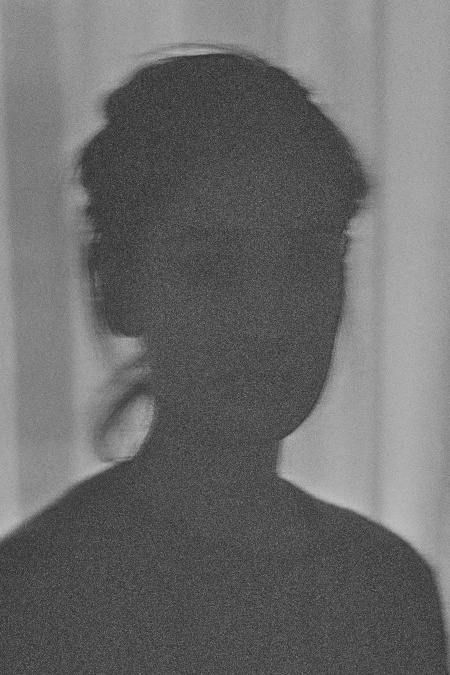 Gaze
A wall-sized, dark, almost unreadable portrait stands in the centre of my graduation project and concludes most of the core concepts of my current research. My initial intention for a large projection of a filmed portrait reappears here, although this time in a photographic still. This slide projection engulfs a separately constructed wall covered with a layer of grainy concrete. This 4 meter high wooden screen hangs, almost clamped, in between floor and ceiling. The grainy material continues along the floor, as if the image has seeped into the room, thereby underlining the sculptural character of the piece. The image itself is underexposed and indicates, through the shape of a silhouette, a human figure. The strong granularity of the high resolution film is emphasised through the enormous enlargement. This grain and the darkness of the portrait provoke a vibrating image in front of the spectator’s eyes while her concentrated gaze attempts to decipher more details in the face, which has sunken into the grain of the wall and the image itself. 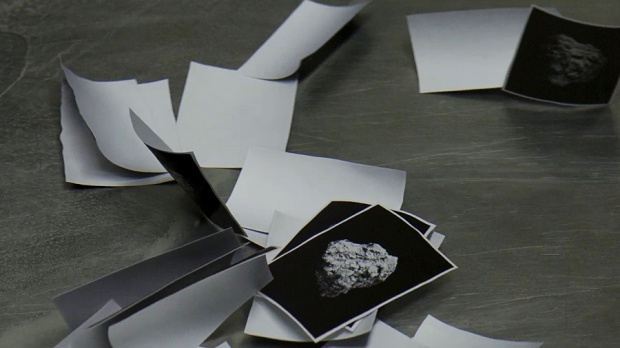 Watertank
Although visually completely different, the second element in the installation stands in direct dialogue with the slide projection of the portrait. A flatscreen is placed in the corner, resting on the floor and leaning against the wall. With a view from above, the beholder looks at a video of a watertank in a photographic darkroom. The circulation of water in the tank moves small photographs around, showing the front-side of the image, before turning over. The flow of water and the limitation of the basin creates an accumulation of prints, which dissolves in the next wave created by the mechanics of the watertank. The same conglomerate is photographed from different angles and underlines, as a recurring element, the cyclical movement of the water within the tank. With this video, the borders between the representational and the abstract dissolve. In relation to these two poles I would like to return to the photography of Hiroshi Sugimoto: “In weakening the representational character of his images Sugimoto makes them a pointing gesture to something that cannot be named and is therefore more a reference to a virtual memory than a reference to a single object.” (Wittmann) My intention in this piece is to create a space where language and not content, guides the viewer’s perception. This video of the watertank refers back to the portrait, where the unpredictable movements of floating photographs, cause the viewer to again wait to perceive the image.

Pier
The third element in the installation closes the circle in the form of a pure observation: a filmed seaside. The camera, in a static position, is turned towards the ocean, but its view focuses on the beach and thereby crops the line of the horizon. The upper half of the video shows waves building and breaking. Although the lower half is calmer, it still changes its appearance constantly, where the waves cover the ground with water, before being pulled back into the sea. The remaining wet surface reflects the construction of a pier standing out of frame. As the sand dries in the sun the reflection slowly disappears, but the next incoming waves moisten the sand, and the image reappears. The work is projected at the lower end of the wall. Underneath, the slightly shimmering floor resumes the process of waves recorded in the video within the exhibition space. The expected sound of breaking waves is silenced to create a point of focus on the repeating process of the construction and dissolution of the image.