A location-based game, blurring the boundaries of the “magic circle”[1], seeing the latter as a temporary rule set which differs from the behavioural code within the society outside of its collectively envisioned framework. I am interested in creating scenarios within public spaces of Rotterdam in which players will need to solve puzzles in order to unlock a new stage of a narrative. This multi-player game will be driven by objectives to be found an online platform, connecting areas within this virtual space with physical locations. Unlocking a physical lock might open up a new area in the web game and vice versa. Potential sceneries of real-life gameplay are supermarkets, internet cafés, night shops, parks and metro stations for example. The core topic of the game revolves around personalised, location-based targeted content under the veil of ludification. The core mechanisms and visual language bridge 1990 and early 2000s online role-playing environments with current developments of playbour[2] and automation. My target audience is citizens of Rotterdam affected by overly stimulating and encapsulating mainstream online platforms, leaving no space for non-economic urban play and alternative ways of social encounters.

There will be different components connecting a web game with a Multi-User Dungeon style interface to escape game puzzles in public spaces. For the web game I will set up a server with a php database, connected to wireless arduinos in different locations of the city. I will look for locations where certain game mechanics, albeit not explicit, are already in place. For example unlocking a locker with a number code at central station. I will write a narrative and reveal parts of the plot in stages/levels of the gameplay through a text-based interface. In order to make sure the game is not too hard or too easy, I will plan several test moments with small groups :) I am planning to work on the electronic puzzles together with tech art collective "Telemagic" at their studio in Rotterdam.

Personally I am interested in the ways in which imaginary and virtual worlds pull us in and dissociate us from our physical environments. From a young age I was interested in the meaning of a common reality and now as a maker I am searching for the moments this common reality noticeably crumbles. I am noticing the process of extreme personalised content online, which is one of the causes of social disconnect when stepping into the shared physical realm of the city. I expect this to extend further and further into the spaces outside of the screen. How can I stimulate feeling grounded into one's surroundings, feeling hyper-aware and awake? A game set in public space somehow suggests that everything could be important, everything could be a potential lead to follow. I would like to encourage players to look closely in order to find hints which would have otherwise blended into the environment smoothly.

Tomo wrote his Master's thesis about an escape game, which he built and executed in Amsterdam in 2018. He is experienced with gamified interventions in public space and how to integrate the used methods with the storyline to create a cohesive experience. I am planning to share my progress with him and discuss ways of making relevant puzzles.

My name is Roos Groothuizen. I am an independent media artist and designer who dances on the borders of interaction, theater, intervention, web, film, games and animation.

Who is in control over what I perceive? Fascinated with the unfair distribution of information and how online algorithms systematically discriminate us, my work reflects on in-depth research and recent developments, often with interactive or game-like elements. Fun with a serious undertone.

Roos is great and knows a lot about everything. She also set up a conceptual escape room in TETEM this year, powered by a raspberry pi server connecting a series of automated, multi-media puzzles. Starting in January, we will be sharing a studio and I plan to develop the storyline and puzzles in dialogue and with guidance from Roos.

"nvisible.studio is the independent research practice of Finnish designer and filmmaker Emilia Tapprest (b. 1992). She is currently enrolled at Filmforward’s Vrijplaats residency and Stimuleringsfonds’ Talent Development programme 2021-22. Her research explores the role of value paradigms in emerging technocultural developments through worldbuilding and cinema, working closely with historian and music producer Victor Evink (S x m b r a). Their works as a duo Liminal Vision tackle themes such as human connectedness and agency in the quantified age, exploring how a system's underlying logic produces particular ‘affective atmospheres’ in interaction with its social fabric."

Emilia has an amazing sense of creating a special atmosphere, through subtleties such as scents. We have been working together to create Earthrise and EtherAxis and she has been a huge source of inspiration with her world-building and research project Zhouwei Network. I hope to bounce some ideas back and forth and maybe even collaborate on this project in a similar way as we did with previous projects.

As a maker, my focus lies heavily on tools of interaction and gamification, interlinking digital and physical spaces. I am working with themes around gaming and the effect of new technologies on the player's perception of reality. By analysing gameplay methods and implementing them into RL settings, I am creating scenarios in which the viewer turns into the protagonist of an interactive fictional narrative. More specifically I am intrigued by the mental process of dissociation, methods of ludified surveillance capitalism and personalised virtual echo-chambers social media platforms construct based on user data. Since 2018, I have been experimenting with different event formats, testing game methods with small live audiences. These tests range from escape rooms to immersive theatre, treasure hunts and audio tours. This project will combine a lot of my findings and deepen this ongoing research on a technical and theoretical level.

in collaboration with Auryn Parkinson. 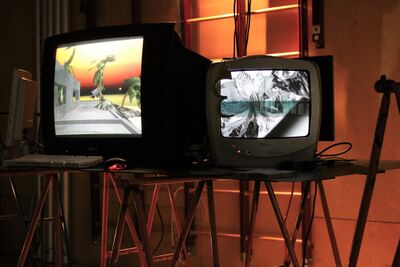 The game installation ‘Ultimate Dragon’ promises the player a personalized utopia. As you move through the fictional landscape in constant dialogue with the program, your input generates a 3-dimensional digital landscape hidden behind its interface. As soon as enough information has been stored, the individualized landscape is revealed.

Can the program’s creation compare to the world the player imagined based on the writing? Whose fiction is created here? 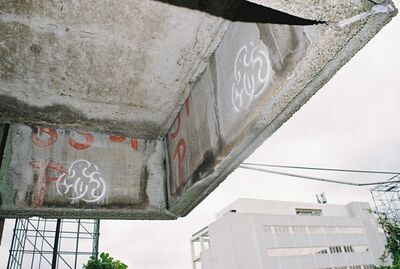 Something is rising in the midst of the city surrounding us. In between the many microcosms of the infinitely unfinished city of Rotterdam, three potential futures are emerging in the nebulous atmosphere. A city mirroring a constant construction site opens up doorways to realities close enough to sense. The realities of the year 2041.

In a game of chance, players are led to a series of geographical locations, to try and unlock artefacts of the societies of Zhōuwéi Network. In the form of an ephemeral soundscape, Earthrise infiltrates your perception of the changing sceneries you find yourself in as you follow the directions of the game makers. As you surrender to the game, your destined path will unravel before you. Do you feel at home in your own reality? What about the one you are moving towards? 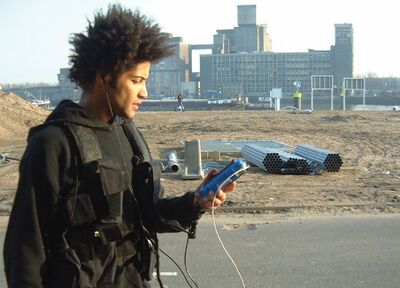 I am inspired by Multi-User Dungeons, which were one of the first role-playing chat environments of the early internet. There is a strange overlap between fact and fiction they have caused and this seems to have inspired novelty game formats such as Alternate Reality Games. In the early 2000s, there was a time these type of games were quite common, but nowadays they seem to have vanished. Cross-platform navigation games like "Can you see me now?" by Blast Theory relate strongly to my own approach and I am drawing inspiration from their documented interventions. In the meantime, Escape rooms have risen in popularity, immersing the players within an isolated fictive setting inside a room or building for usually one hour at a time. Fast forward to 2018, where Tomo Kihara executed a city game called "Escape the Smart City", imagining an overpowering computer system which automizes surveillance. In 2020, Covid 19 causes a number of lockdowns worldwide, closing down cultural institutions and shops, leaving only the city streets as a platform of distributing art. A general worry and discourse around an Infocalypse seems to be a red thread in the cultural sector within digital art. In 2021, Roos Groothuizen executed her conceptual escape room called: I want to delete it all, but not now.

My goal is to make a more visible link between the first role-playing platforms and today's puzzling take on fiction.

I am sorry for the amount of times I have used (and will continue to use) the word "game".

[2] Zuboff, S. (2019). The Age of Surveillance Capitalism: The Fight for the Future at the New Frontier of Power. London: Profile Books.

Turkle, S. (1996). Life on the Screen: Identity in the Age of the Internet. London: Weidenfeld & Nicholson.

Szulborski, D. (2005). This is Not a Game: A Guide to Alternate Reality Gaming. Pennsylvania: New-Fiction Pub.

Hoffman, D.D. (2019). The Case Against Reality: How Evolution Hid the Truth From Our Eyes. United States of America: W.W. Norton & Company.

Blast Theory. (n.d.). Can You See Me Now? [online] Available at: https://www.blasttheory.co.uk/projects/can-you-see-me-now/.

from, D. (2019). What is geo-fencing (geofencing)? - Definition from WhatIs.com. [online] WhatIs.com. Available at: https://whatis.techtarget.com/definition/geofencing.

Arushi Jaiswal (2018). Dark patterns in UX: how designers should be responsible for their actions. [online] Medium. Available at: https://uxdesign.cc/dark-patterns-in-ux-design-7009a83b233c.