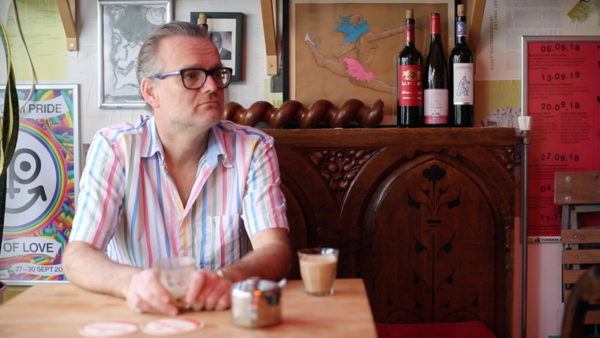 What do you see?

It's a guy in his mid-forty.

He's one of the main character.

Are we in a bar? Or in domestic space?

The coffee cup and the shelf indicate he's at the bar.

But it's still unclear.

Perhaps it's his bar and his nest.

Everywhere you look in the space, there's treasure.

Bottles, paintings. The objects reflect him.

The colors from his shirt and the colors in the poster hint at gay pride.

Is he a nice quiet man?

Maybe he's an activist for the gay community.

Where (the hell) are we?

There's some irony in this. Maybe he's about to say something sarcastic.

We are in the Netherlands. He could also be a lawyer.

This could also be in some hipster startup scene, like a fake bar that tries to be dissheveled.

We are in Rotterdam.

Is it uncertain or is it pride? Maybe a bit bossy.

Or a face of repose, as in:

He might not have chosen the paintings and other objects deliberately.

Did he find them and just put them on the wall?

There's the cliche of wine bottles next to and dark wood, but the wood is broken.

What is his craft?

He seems like someone who likes to collect stuff.

Or he's organizing a gay pride.

What can you know about someone through photography?

You are only catching one moment.